The Trammell Game signaled the greatness of a Detroit shortstop 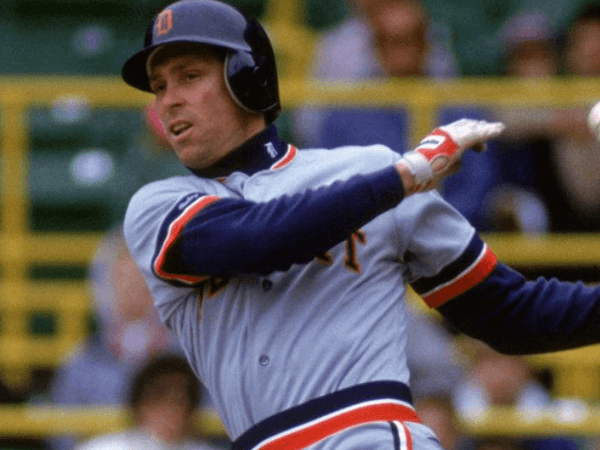 Shortstop Alan Trammell helped the Detroit Tigers to the World Series title in 1984 with his glove and his bat.

On May 8, 1984, the Detroit Tigers were trailing the Royals by a run in the seventh inning. The Tigers loaded the bases and Kansas City ace reliever Dan Quisenberry was summoned to the mound to get out of the jam. This was a different era, when closers were brought into games earlier than the ninth inning. KC manager Dick Howser needed Quiz to get seven outs to preserve a victory. But Alan Trammell got in his way. The result is what I call The Trammell Game.

Quisenberry was in the middle of a six-year stretch as the most dominant reliever in baseball. He used a submarine delivery where he practically scraped the mound with his knuckles as he fired the baseball to the plate. He had remarkable control, the previous year he’d walked only 11 batters. It was very difficult to hit the ball far and hard off him, because he had so much movement and kept the ball very low in the strike zone. At times he seemed unhittable.

The Tigers were five weeks into the season and it felt like they’d already used up all their magic for the year. They won nine in a row to start the season, Jack Morris tossed a no-hitter, and everyone was contributing. It didn’t matter who it was, a starter, a star, a bench player, or a scrub, if Sparky Anderson put him in the lineup, he delivered. The team record was 23-4 and the Tigers were perfect on the road, 12-0 entering this contest against the Royals in Kansas City.

Quisenberry fired three pitches, one was out of the strike zone, another confounded Trammell and he swung through it, looking pretty bad. On the third pitch Quisenberry fired a fastball on the inside part of the plate. Trammell got the bat out in front and drove it over the left field wall for a grand slam. BOOM, just like that the air was let out of Royals Stadium. Quiz held Detroit scoreless in the eighth and ninth, but Trammell’s homer was the death blow and the Tigers won.

At the time he belted the grand slam, Trammell was hitting over .370, leading the charge as the Tigers soared to a 35-5 record later that month. The moment, the grand slam, got lost in the greatness of that 35-5 start, but it was important.

A signature game is when we realize the player we are watching is different, destined for something. I’m not talking about Quisenberry, he would continue to be a great closer, he’d lead the league in saves in 1984 and again the following year. I’m talking about Trammell. That grand slam was a turning point moment in his career. He was facing the preeminent relief pitcher in the game, an immovable object. But Trammell shoved that immovable object out of the way. It was shocking. It signaled that Trammell was special, that we were seeing a special player in his prime destined for greatness.

Before 1984, Trammell was a good player, had a few nice seasons. He’d always been a good fielder, but when he came into the league he was skinny, he didn’t look like he could lift his equipment bag. He was great around second base with his partner Lou Whitaker. He started to hit a little bit in his third season, but took steps backward. In 1983 he was 25 years old and had a very good season, hitting .319 with 14 home runs. It might have been a career year, for all we knew. But early in ‘84, as his team rolled out to that record-setting start, Trammell was on a torrid pace, hitting close to .400 as the Tigers won nearly every day. The grand slam was a scream to the heavens: “This guy is special!” A few years later we witnessed his career year, one of the best ever by a shortstop, and he stayed near that level for a few more seasons. Eventually the Hall of Fame came calling. The Trammell Game set that in motion.

Trammell had two two-run homers in Game Four of the 1984 World Series, and his nine hits led the Tigers and helped him win the World Series MVP award. The 1984 season was his coming out party.

Who else has had signature games? Probably lots of guys if we had the time to sift through the box scores. There are some obvious examples: The Sandberg Game, The Flip Toss by Derek Jeter in the 2001 playoffs. They can occur on a big stage or they can (more often) be regular season games with no seeming significance. Pitchers can have them too, like Jack Morris in Game Seven of the 1991 World Series, a game that probably did more to get a man elected to the Hall of Fame than any other in baseball history.

What games do you remember that had a significant impact on a players’ career? Share them in the comments below.

See the box score from the May 8, 1984 game when Trammell hit a grand slam off Dan Quisenberry >