These are the free agent pitchers the Tigers should go after 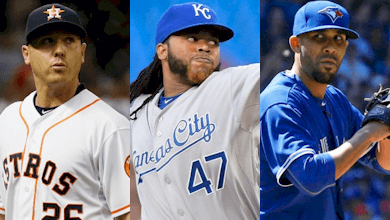 Al Avila recently said the Tigers will be seeking to add two starting pitchers for the 2016 season. They certainly must.

The 2016 rotation right now projects as Justin Verlander, a couple of question marks in Daniel Norris (still young and coming off surgery) and Anibal Sanchez (coming off a bad season), and beyond that nothing except maybe more trials for Drew VerHagen.

How will Detroit acquire two more starters? It likely won’t be via trade. Dave Dombrowski is gone, so the Tigers are not going to swindle anyone into parting with a good starter. Besides, who would Detroit trade to get a good pitcher? The cupboard is bare. There are no expendable position players, and the minor league system isn’t exactly bursting with prospects.

So that leaves Avila shopping for free agents. Luckily, the Tigers should have a reasonable amount of money to spend on them, assuming Mike Ilitch still has his coffers wide open in search of that elusive world championship. The Tigers are committed to contracts totaling $111.8 million for 2016, according to Baseball Reference.Com’s calculation. Most of that money is tied up in long-term contracts for Verlander, Sanchez, Miguel Cabrera, Ian Kinsler, and Victor Martinez.

If they want to keep free agents Rajai Davis, Alex Avila, or Alfredo Simon, the Tigers will have to sign them to new contracts. Simon would be a useful member of the bullpen, and a backup option for the back if the rotation if they can’t acquire anyone else. But Tigers Detroit should be hoping he isn’t someone GM Avila is thinking of as a keeper for the starting rotation.

In addition, Jose Iglesias, J.D. Martinez, Andrew Romine, and Al Alburquerque are eligible for arbitration. Iglesias and J.D. are musts and will probably look for multi-year contracts. The Tigers will do whatever it takes to keep them in the fold.

That still leaves plenty of payroll flexibility—and the Tigers will need it to sign two good starters.

Who are the free agent pitchers Detroit could go after?

There are the blue-chippers: David Price, Zack Greinke, and Johnny Cueto. But the Tigers will have some tough competitors for all three. I don’t see Price coming back to Detroit when he will have a slew of better suitors, starting with his current team, Toronto. Greinke will likely stay in LA or jump to San Francisco. He can command more from an NL club anyway because he is the best-hitting starting pitcher around.

Cueto is probably the most likely of the trio to be someone the Tigers could land—but would he really be worth what Detroit would have to pay? His performance with the Royals after the All-Star break this season makes that a real question.

Probably the most intriguing possibility in the top tier is Jordan Zimmerman. He’s only twenty-nine and seems fully back on track after his injuries. He is a proven workhorse and would be worth a lot. Whether the Nationals would let someone snatch him away is a real question. There will be spirited bidding for him, but the Tigers should be going all-out.

Jeff Samardjiza, thirty, is also very talented, but is he priced higher than his on-again, off-again effectiveness? The White Sox will pay plenty to keep him, and I’d guess the Tigers will let them.

If Avila could land any of these top five, I’d be surprised. Detroit isn’t looking right now like the kind of team a talented young starter in his prime would sign up for long term, and these pitchers will want security—unless they want to gamble on a one-year contract that might increase their market value. Zimmerman might go that way.

Just below this tier are a couple of intriguing starters with slightly more age and experience but a spottier resume. Scott Kazmir may be affordable. The Houston lefty has bounced around but has always had good stuff and has usually produced results. Would the Astros let him go? He brings some veteran stability to their young staff, so it’s doubtful. But he’d be a great addition to the Tigers. Ian Kennedy is similar to Kazmir—dependable, consistent, thirty-ish—but he doesn’t have as big an upside.

There are a bunch of old guys that are easy to pass on. Mark Buehrle? At thirty-six he might have one good year left. Kyle Lohse, Bartolo Colon, Iwakuma of Seattle—all have mileage on them. They will be there later in the winter if Detroit is desperate. Tim Lincecum will be, too, if the Tigers believe they can salvage him; he’s just thirty-one. But that would be a major reclamation project.

Finally, and more promisingly, there are a quintet of free agents Detroit should take a close look at. The Dodgers’ twenty-seven-year-old lefty Brett Anderson should be a top target. The Orioles’ thirty-year-old Wei-Lin Chen is consistent and may be affordable. He’s a little homer prone but should be even more valuable in a park like Comerica. Chen would be a solid addition to the rotation.

In addition, consider the upsides of these three: Marco Estrada in Toronto. A.J. Happ has turned his career around in Pittsburgh. Either would fit well here. Or Detroit could reacquire Doug Fister. He was banished to the bullpen in D.C., but Tiger fans would welcome him back without a doubt, and he could flourish again here with Detroit’s good defense up the middle to turn all those ground balls into double plays.

I wouldn’t be surprised if Avila has his eye out for Zimmerman, Chen, and Fister—and Detroit fans shouldn’t be at all dismayed if the Tigers end up with Kazmir and Happ. Stay tuned for an interesting off-season.