These are the Greatest Double Play Duos in Baseball History 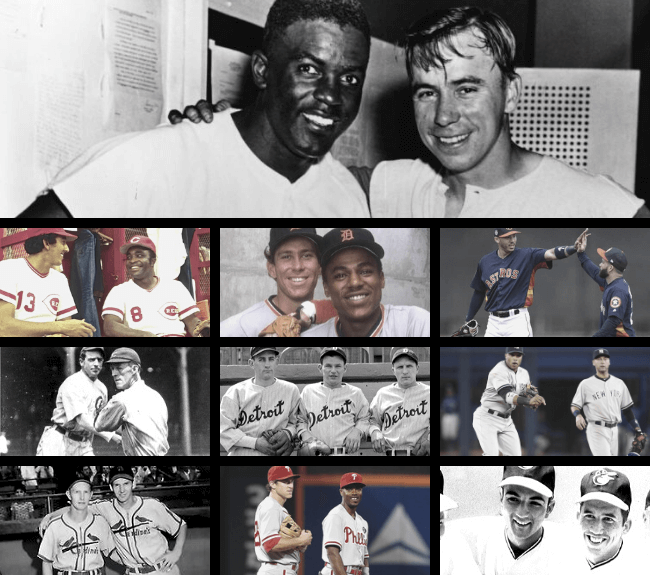 It used to be said that the heart of a championship team was up the middle, with the focus on the second baseman and shortstop. That’s because those two infielders handle more plays than any other positions, and they are often responsible for baseball’s most important defensive weapon: the double play.

Baseball history is filled with legendary double play combos, but most duos stick together for only a short period. It’s hard to keep two middle infielders together for long, and finding two great players up the middle is nearly impossible.

When a team gets lucky enough to have a great pair in the middle of the infield, they usually find success. The ten combos below all won at least one World Series title, and many of them were in the postseason several times. Of the fifteen players on our list who are eligible, nine of them are in the Baseball Hall of Fame, and a few more are deserving.

Here’s my selection for the ten greatest double play duos in baseball history. Let me know your thoughts in the comments section below or on the Vintage Detroit Collection Facebook page.

Trash cans and sign-stealing aside, this pair has won two pennants already and Correa is still just 25 years old. Will the Astros keep Correa and Altuve together much longer? We’ll see. Will Houston recover from the scandal that threatens to delegitimize their World Series title in 2017? Remains to be seen. But in their five years together through 2019, the pair have had tremendous success, even when they didn’t know what pitch was coming.

The Baltimore Orioles were a lowkey dynasty for about twenty years, and it started when they formed a spectacular infield defense in the mid-1960s. At the hot corner was the esteemed Brooks Robinson, probably the greatest defensive third baseman ever, and at first base was Boog Powell, a fine defender. The O’s had Davey Johnson and Mark Belanger at second and short respectively, two of the best defensive players to ever work at their positions. They both came up through the Baltimore system and they solidified the Orioles’ defense during the 1969-71 run of three straight pennants. Belanger couldn’t hit a lick, but he was one of the five best defenders ever at short. For leather work, this duo rates near the top.

Only twelve duos have played short and second together for as long as a decade, and these two did it during the first great era of Detroit championship baseball. Gehringer was a fantastic all-around player: steady and reliable in the field with good range and an accurate arm, and with the bat he was one of the most dangerous lefthanded hitters in the game. He won an MVP, and with Rogell the pair helped the Tigers to pennants in 1934 anjd 1935. Rogell later became a longtime city councilman in the Motor City.

They didn’t play together very long, but these guys could pick it with the glove. The Cardinals won four pennants in five seasons in the 1940s, but because of World War II, Red and Marty only got to play once on a pennant winner together. Like Belanger, Marion rates as one of the best defensive shortstops in baseball history. With his long arms and legs, he was known as “Octopus” and famous for his strong arm and great range. Schoendienst spent nearly two decades as a player, and he was a winner, playing forn three pennant-winners and earning ten All-Star selections overall on his way to Cooperstown.

They weren’t known for their gloves, but this combo could hit the ball: they each averaged more than 180 hits and 20 homers per season together. In 2009 they led the Yankees to their most recent pennant and World Series title. In 2020, Jeter will be inducted into the Baseball Hall of Fame. Cano has a chance to set the mark for most career homers by a second baseman.

A dynamic duo with no real weaknesses. Both had speed, good power, could hit for average and get on base, and they were both very good defenders. Their twelve years together ranks second all-time for a souble play duo, and in 2008 and 2009, they led the Phillies to the World Series.

Would rank higher if Robinson played more at second base. He split his time between second, first, and the outfield, as Reese also paired with Junior Gilliam at times. But when Pee Wee and Jackie were up the middle together, they were magical. Both were excellent defenders, both with great arms and quick feet. Robinson won the Rookie of the Year (an award later named for him), and MVP. They are one of only two groups on this list where both men are in the Hall of Fame.

The Big Red Machine is the greatest team in baseball history, and Morgan and Concepcion had a lot to do with that. Their Gold Glove defense solidified the airtight defense for the Reds in the 1970s, both players winning five Gold Gloves as a combo. Morgan was the complete player, a five-tool performer and two-time MVP. Concepcion matured into a solid hitte, but he was known for his tremendous defense, featuring a rocket arm and great range on the carpet in Cincinnati. For his part on one of baseball’s most famous and successful teams, and for his prowess in the field, Davey deserves to join Little Joe in the Hall of Fame.

Those are the words of “Baseball’s Sad Lexicon,” penned by Franklin Pierce Adams in 1910 in the New York Evening Mail. And sad they were for Giants’ fans who watched again and again as Joe Tinker and Johnny Evers led the Cubs to victory over their favorite team. From 1906 to 1908, and again in 1910, the Cubs captured the National League flag thanks in large part to their famed double play combination.

Though Tinker and Evers were not friends (they did not speak off the field for years), they were gifted athletes who had no equal in turning two. Their eleven years together were surpassed by onloy two DP combos, and both Cubs were eventually elected to the Hall of Fame.

No one comes close to matching the 19 years Sweet Lou Whitaker and Alan Trammell spent together in Detroit. For most of that time, they were the primary double play combo, save for a year or two when Whitaker was platooned late in his career. They each won at least three Gold Gloves, and probably could have won many more. They were among the best with the bat at their position all-time, each collecting at least 2,000 hits, 1,000 runs batted in, and 180 homers. In the 1984 World Series, one or both of them reached base in the first inning of every game, jump-starting the Detroit offense on the way to the title.

Trammell and Whitaker were groomed to play together in the Detroit farm system, and made their big league debuts on the same day, getting their first hits in the same game against the same pitcher. They turned more than 1,100 double plays together, a major league record. They played 1,874 games together (third all-time for teammates), and more than 95 percent of them came as a double play combo. They hold the record for most games played as souble play partners, and their careers are indelibly linked. Trammell is in the Hall of Fame, and it’s a crime that Whitaker isn’t.

Who was the greatest double play combo in baseball history? Did I get my list wrong? Tell me in the comments below or join the debate on our Facebook page.

4.7
5
a month ago
I am astounded at how awesome these guys were. I had an item that was damaged during transit, they sent a new one out immediately. Such nice people.
5
6 months ago
Fantastic experience! If you’re in the market for anything Detroit sports, do yourself a favor and shop local. These guys are the best. I live up north. Had an old Red Wings Jersey I wanted customized. Sent it down to them and it came back absolutely perfect!
5
3 months ago
Super friendly staff and the in-store pickup is really easy. Very happy to have found another local place to support!
5
4 months ago
Great service! I ordered a Tigers hat and I picked the wrong shipping method. Called the store and my problem was handled with no hesitation. How often does that happen. Will shop here again for sure. Support Local Small Business
5
5 months ago
Had a Redwings jersey customized and the quality of work and turn around time were only beat by their amazing price. I’m always stopped to ask where I got my Zetterberg jersey from when ever I wear it. I would highly recommend their service, I know I will return if I need a Detroit jersey made!