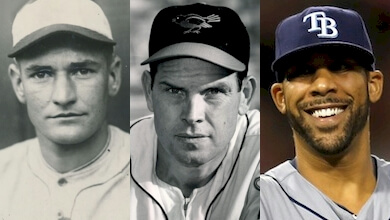 David Price and Miquel Cabrera were teammates for parts of two seasons in Detroit. By all accounts, the two All-Stars got along just fine. However, meaning no offense to Dave, Miggy never wants to see his face again.

On the mound, that is. Throughout Cabrera’s accomplished 13-year career, which includes a .321 lifetime batting average and four of the last five American League batting titles, no pitcher has given him more fits than Price. As a member of the Tampa Bay Rays and now the Toronto Blue Jays, Price has limited Cabrera to just one lousy single in 17 at-bats. This works out to a .059 average—Miggy’s worst performance against any pitcher he has had at least 15 at-bats against.

Moreover, Miggy has struck out seven times in those 17 at-bats against Price. Ouch.

Conversely, Cabrera had nothing but success against now-retired Adam Eaton, whacking the much-traveled pitcher at an .800 clip and hitting a home run every fifth at-bat. He has similarly abused Cleveland’s Corey Kluber, compiling a .571 BA with five round-trippers in just 35 ABs.

Al Kaline, a .297 lifetime hitter, had a few such “cousins” during his 22 seasons. He was 4-for-4 lifetime against Bob Friend, for example, with three RBI. And he was similarly perfect in two career at-bats against Minnesota’s Jerry Fosnow, with both hits sailing into the stands. Kaline was only slightly less devastating when facing Spec Shea (8-for-12, .667) and Yankee hurler Vic Raschi (5-for-7, .714 with two home runs). Of course, those gaudy numbers came in just a handful of at-bats. But among moundsmen that Kaline had at least 15 ABs against, he racked up lifetime marks of .400 or better against 18 of them.

On the flip side, Al never could figure out Art Fowler, who pitched for the Los Angeles Angels in the early ‘60s. Al wore the collar against the right-handed reliever, going 0-for-13. Fowler later became Detroit’s pitching coach under Billy Martin, and he enjoyed ribbing Kaline about how he’d always had his number.

Curiously, Kaline’s most futile effort against any pitcher whom he had 15 or more at-bats against was another right-handed reliever and future Tigers pitching coach, Billy Muffett, who faced Kaline in 1960-62 as a member of the Boston Red Sox. In 17 ABs, Kaline could manage only one hit—an .059 average.

Even such a brilliant hitter as Ty Cobb had a hell of a time with certain pitchers. The 12-time batting champ hit .367 lifetime with three .400 seasons. But his chief nemesis during 24 big-league seasons (all but the last two as a Tiger) was an obscure pitcher named Bill Bayne. The little southpaw lost one more game than he won during his undistinguished nine-year career, the bulk of it spent with the St. Louis Browns in the 1920s.

However, Bayne limited the mighty Cobb to a paltry .139 average—the Peach’s worst performance against any twirler. Bayne’s handling of Cobb defies easy explanation. One theory is that Bayne was a lefty with good control—the kind of pitcher that always gave Cobb the most trouble—and that he was used primarily in relief, denying Ty the extra at-bats it often took him to solve a pitcher.

Cabrera, Kaline, and Cobb won 17 batting championships between them. Statistically, here’s the pitchers they had their greatest and least success against. The rankings are based on a minimum of 15 at-bats.