These Detroit athletes wore zero on their back 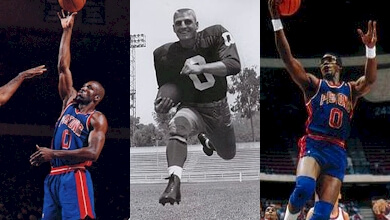 It is interesting that so few athletes have worn the number “0.”

The reasons are mostly psychological, perhaps.

For many players, having the number 0 could imply that you are also a zero, talent-wise.

It probably takes a player comfortable in his own shoes, and assured of his abilities, to put a 0 on his back.

With that, here’s a historical look at Detroit athletes who wore zero.

Interestingly, no Tigers or Red Wings are on the list.

The first one was Johnny Olszewski, who played for the Lions for one season in 1961. A fullback, Olszewski was a former first round draft pick by the old Chicago Cardinals in 1953 (he was actually the fourth player selected). He’d been an All-American at the University of California Berkeley.

When he began his pro career, Olszewski (knowns as “Johnny O”) wore number 33 with Chicago, but soon changed to number 36. He was a two-time pro bowler with the Cardinals. It wasn’t until he was traded to his hometown Washington Redskins that he first wore number zero. He was the first and only “0” player for that franchise, and for the Lions, as well.

With Detroit, Johnny O saw action in 14 games, rushed for 109 yards, and also hauled in one reception for 14 yards. He played for the Denver Broncos the following year, his last one in the NFL.

As for the Pistons, they’ve had a total of three zeros, and four double-zeros.

The original one was Tony Campbell, the team’s first-round pick in the 1984 draft out of Ohio State University (20th player selected). The small forward played in 178 games in his three years in Detroit, with only one start. He wore 00 the entire time. In October of 1987, Campbell signed with the Washington Bullets as a free agent. The Pistons were to have received a second-round draft pick as compensation, but it was contingent on Campbell making the Bullets’ roster. He didn’t, so Detroit lost out on the pick. Add it all up, and Campbell was pretty much a wasted first-round selection.

Next up is William Bedford, another 00. He has to rank as one of the ultimate cases of unfilled potential. Bedford was a first-round pick by the Phoenix Suns in 1986 (sixth overall). After one season in the desert, Bedford was traded to the Pistons in exchange for a first-round pick. At seven feet tall and 225 pounds, Bedford was an imposing center. He had all the makings of an impact player, but his time in Detroit was marred by substance abuse. The Pistons finally traded him to the Clippers in June of 1992. Less than two years later he was out of the league. After his playing days, he spent several years in prison for drug trafficking.

Former Notre Dame stand-out Orlando Woolridge wore 0 for the Pistons. One of the best dunkers of his era, Woolridge, a small forward, was acquired in an August, 1991 trade with the Denver Nuggets (the Pistons relinquished Scott Hastings and a second-round pick in the deal). By that time, the 32-year-old Woolridge had played ten years for four teams, and he didn’t have much left in the tank.

Olden Polynice played two seasons with the Pistons (1992-93 and 1993-94). He’d begun his career with the Seattle Supersonics and L.A. Clippers wearing number 0, but when he arrived in Detroit, that number was already claimed by Woolridge. After Woolridge left, Polynice took to wearing number 0 once again. A native Haitian, Polynice was a former first-round pick (by the Bulls in 1987) and had a long career in the NBA at center, making his name as a solid rebounder.

Eric Montross, another first-round pick (Boston in 1994), wore either 0 or 00 his entire eight-year career. The Pistons picked him up in what was a pretty big trade at the time, with center Montross and guard Jerry Stackhouse coming over from Philadelphia, along with a second-round draft pick, for Aaron McKie, Theo Ratliff, and a future first-round pick. He wore 00 in his three seasons in Motown. Montross was another guy who entered the NBA with high expectations which he never lived up to.

What is it with first-round picks and the number 0 (or 00)? Tony Delk, picked number one (16th overall) in 1996 by Charlotte, played for eight NBA teams, including the Pistons in his tenth and final season in 2005-06. A backup to Chauncey Billups, Delk played in only 23 games in Detroit, wearing 00.

And finally, there’s the Pistons’ Andre Drummond (yes, another first-round pick), who is already the greatest player in Detroit sports ever to wear 0 (although he originally wore number 1). Hopefully he can wear it for many years to come. The Big Penguin is a pretty excellent nickname, as well, but that is another story.