These Lions teams could have been NFL champs 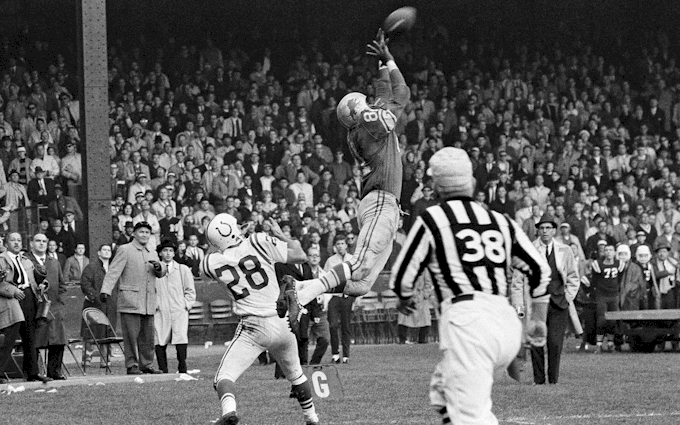 There was a time when “one-and-done” referred not to a first-round exit in the playoffs, but actually described the entire National Football League postseason. Play one game and, win or lose, the season was over. That was the NFL during the first three decades of divisional play (1933-1966), when the first-place finishers in the Eastern and Western conferences battled it out in a single championship game finale. Occasionally there was a divisional tiebreaker played to determine who went on to the title game (the Lions played in two such games, in 1952 and 1957), but those special playoff contests were the exception, not the rule.

By the late 1960s, pro football discovered one-and-done is no fun. Expanding the postseason kept fan interest up and, not incidentally, made players, owners, and networks richer. Today, 12 of 32 NFL teams get into the playoffs, and the number of entrants will undoubtedly increase to 14 before too many more seasons pass.

Looking back at those pre-Super Bowl days, it’s easy to spot several instances where the second-place Detroit Lions would have been a legitimate contender to win it all in a modern playoff format. In a different world, these Detroit squads could have been NFL champs:

The former Portsmouth Spartans, featuring tailback Dutch Clark, opened their inaugural season as the Detroit Lions with an unprecedented seven straight shutouts. Green Bay snapped the Lions’ 10-game win streak win streak with a 3-0 victory in November, though the Lions still had a shot at first place when Bronko Nagurski and the Chicago Bears came to town on Thanksgiving. Before a standing-room-only crowd of 26,000 at the University of Detroit’s Dinan Field, the Lions lost an exciting showdown for first place, 19-16. The Bears beat the Lions a second time a week later to finish the regular season with a perfect 13-0 record. However, George Halas’s squad was upset by the New York Giants in the title game, 30-13.

The Lions rebounded the following year, winning the Western Division and then defeating the Giants, 26-7, at Dinan Field for their first championship.

Buddy Parker, a member of the Lions’ 1935 champions, fell just short of steering the team to a division title in his first season as head coach. The Lions, featuring future Hall of Famers Bobby Layne, Doak Walker, and Jack Christiansen, entered their final game at San Francisco needing just a tie to move on to hosting the championship game against Cleveland. However, the 49ers rallied in the final minutes, quarterback Y. A. Tittle scoring on a short run to give San Francisco a 21-17 victory. Meanwhile, Los Angeles beat Green Bay to sneak past the Lions by a half-game in the final standings. The Rams went on to beat the Browns, 24-17, in the title game.

Once again, the Lions used their disappointment as incentive. The following season they won the first of three consecutive division crowns and beat Cleveland for the first of two straight NFL titles.

Many observers consider this the best team of the Parker-Layne era, though it didn’t make the postseason. The Lions were a half-game up on the Bears when they visited Wrigley Field in the regular-season finale. Detroit had demolished Chicago, 42-10, just two weeks earlier, to move past the Bears in the standings. On this Sunday, however, Layne was knocked out early on a late hit by Ed Meadows. Chicago romped, 38-21, to grab the Western crown, but then got steamrollered by the Giants in the title game, 47-7. Charges and counter-charges of dirty play filled the offseason. The most significant upshot of the controversy was that Detroit needed a strong back-up quarterback, and so Parker dealt for the Packers’ Tobin Rote.

As had been the case with the ’34 and ’51 squads, the ’56 Lions regrouped and won it all the very next season. In 1957, Rote filled in for Layne brilliantly as the Lions beat San Francisco in a playoff to win the Western Division, then crushed the Browns, 59-14, for their last NFL title. To make the ’57 championship even more improbable, Parker quit as coach during training camp and was replaced by longtime assistant George Wilson.

Hands down, the ’62 squad was the best Lions team never given the chance to play for a title. In fact, it may have been the best team in the history of the NFL never to have played for the championship. At its core was a defense featuring the game’s best middle linebacker, Joe Schmidt, a defensive wall known as “the Fearsome Foursome,” and a secondary with three future Hall of Famers: Yale Lary, Dick LeBeau, and Dick “Night Train” Lane. The ’62 Lions set a team record for victories that stood for three decades until the 1992 club, benefiting from an expanded schedule, posted a dozen wins.

The Lions’ three losses were by a total of eight points: 9-7 to Green Bay, 17-14 to New York, and 3-0 to Chicago. All were agonizingly close losses to strong teams. The Packers and Bears were destined to win the next two NFL titles, beating the Giants each time. The highlight of the entire NFL season was the Lions’ 26-14 massacre of Vince Lombardi’s undefeated Packers on Thanksgiving Day at Tiger Stadium. Bart Starr was sacked 11 times as the tenacious Lions built up a 26-0 lead before coasting home. It was sweet revenge for the earlier loss at Green Bay, when an ill-advised pass by Lions quarterback Milt Plum was picked off, leading to Paul Hornung’s game-winning field goal in the mud.

The Packers went on to beat the Giants, 16-7, in the championship game. Lions fans, however, thought they knew who the real champions were that year.