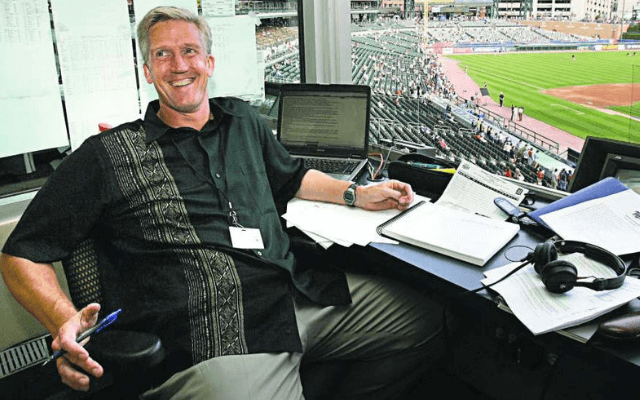 Dan Dickerson has been the lead play-by-play announcer for the Detroit Tigers for 16 seasons, starting in 2003.

After the unfortunate confrontation late last season that ended the run of Mario Impemba and Rod Allen in the booth for Tigers’ baseball on television, the team is looking for a new man to be the TV face (and voice) of the franchise.

There’s only one man who makes sense for the job, and the Tigers don’t have to look far. He’s been sitting in front of the radio mic for years.

I’ve made no secret of my distaste for Dan Dickerson on the radio. Consider this actual excerpt from a game in the 2015 season:

DICKERSON: We’re back at Comerica Park on this brisk, cool spring afternoon. Here’s Anibal Sanchez on the mound to start his sixth inning of work. Sanchez has not had command of his fastball, his primary pitch, here this afternoon, and Jim, that has to be of concern. He has to be able to spot that pitch, to command it, if he’s going to have success.

DICKERSON: In recent starts Jim, and all spring, the Tigers have been scratching their heads at the lack of command Anibal has shown on his pitches. It’s puzzling, and as he starts the sixth here down five runs, he hasn’t shown yet that he knows where his fastball is going. The old zip isn’t there, and neither is the command. This is a pitcher who led the league in ERA just two years ago, has been the author of several great pitching performances for the Tigers … But he’s been unable to get on track. It has to be alarming at how many balls are being hit hard today by the Royals.

[At this point a few pitches have been delivered to home plate, but we don’t know what happened, nor do we know who is at the plate. In fact, if you’ve just tuned in, you’re not sure what the score is. You don’t have sense for the how the defense is aligned, you actually haven’t received any vital information from Dickerson yet. Still he continues to talk… After some comments from Jim Price about his favorite phrase “the art of pitching”, Dickerson resumes…]

DICKERSON: It’s a cool day, and that has to be testing Sanchez as he battles to get comfortable on the mound… There’s a fastball down and away and the count is 1-1 on Cain… Another fastball that sails away from Anibal …

DICKERSON: The 2-1… fouled back… Jim, in talking to Tigers’ pitching coach Jeff Jones, it’s obvious the team is concerned, but it’s still early and this weather has not been helpful for the pitchers, who want to be able to feel the ball in their hands… There’s a breaking ball in the dirt, nice stop by James McCann, full count now on Cain. [Somewhere in there we missed a pitch that was called a strike, there was no mention of it] … The full count delivery on Cain from Sanchez, there’s a sharply hit ball to center, tracking it…a catch! Nice running catch and one down. [We don’t know who caught it, and Dickerson’s description is pretty tame and matter-of-fact, as if it was interrupting his lecture on Sanchez’s pitching…]

PRICE: Cespedes got a nice bead on that ball, Dan.

[Important to point out that we’ve now had one batter reach a full count, and he’s put the ball in play, but Dickerson hasn’t told us the score. He’s almost exclusively been sharing a narrative about the pitching of Sanchez, interrupting himself only occasionally to tell us what’s happened on a pitch.]

DICKERSON: Hosmer in there now, one out in the sixth inning, the Tigers trail 6-1 in a game that started with a home run by the leadoff man Escobar, then two batters later the second run scored off the bat of this man, Hosmer.

[FINALLY, Dickerson has given us some information. But his ensuing description of the Hosmer at-bat is frustrating. He doesn’t tell us where the pitches are, as Sanchez falls behind 0-2. He is casual about the game action, more interested in talking about other things.]

You get the idea. Dickerson is a play-by-play man in name only. He doesn’t bother with telling us the plays, which is what he’s supposed to do. It’s in his job title. He rarely ever gives us what’s called in the business a “reset”, that’s when the announcer tells us the situation: the inning, the score, the runners on base, the outs, the count on the batter. Dickerson probably only does a “reset” a few times a game.

By the way, the excerpt above is short in comparison to others I could share that go one for several minutes across 3-4 or even 5 batters. Dickerson frequently shuns the play-by-play in favor of discussing topics like pitching patterns, game trends, and so on. Those topics are not of disinterest, in fact Dickerson is well-versed on baseball and has a lot of intelligent things to say. But he’s not hired to do that, his job is to tell us what’s happening.

I don’t know Dan Dickerson, I’ve been in the same room with him a few times and he seems like a nice man. He’s popular with a lot of people. I have a few friends who love his work. I don’t get it. To me, he’s the worst play-by-play radio man I’ve ever heard. I don’t base that on his personality, his voice (which is quite good) or his preparation, etc. I base it on how he clearly fails to do his job.

Maybe I’m spoiled because I grew up listening to Ernie Harwell, a master at his craft. Harwell was an old school radio man. He understood that he was the eyes of the audience. His job was to tell us what was happening, he did it in detail. He did it frequently. He kept you informed.

It might be tempting to call Dickerson a modern PBP man, a new breed. We don’t need all that updating and game resets, you might say. Well, I’d argue we do. Radio hasn’t changed, it’s still an audio medium. I can’t see the two pitches Dickerson fails to tell me about. Frequently during games, Dickerson doesn’t even mention pitches, he just keeps talking if no action took place. He’ll talk about the action if the ball is put in play or a strikeout occurs, otherwise, good luck to the listener. This is not a new breed custom, by the way. I’ve listened to all 30 of the PBP men who cover the major leagues. None of them are as casual and lazy about telling us the play-by-play. Dickerson stands alone.

Which is why Dan Dickerson is the perfect man to take over the TV broadcasts for Detroit. In the TV booth, Dan can talk about anything other than the action to his heart content. He can carry on a conversation with his color commentator while we watch the action on the field. It’s perfectly suited for Dickerson.

In the last few years the Tigers swapped Impemba and Dickerson for a game here and there. I’m not sure what the motivation for that was, but I welcomed it. Dickerson’s voice is fine, it’s quite good actually, and when thrilling action occurs, when drama unfolds, he evokes his broadcasts with excitement. He’s a solid professional with his voice. But when he’s on the radio, I simply wish he would use it to describe the action.

Given his brief little stints in the Fox Sports Detroit booth the last few seasons, Dickerson has shown he’s capable of the TV job. Toss Price in there if you want (just please ask him to stop eating so much on the air) and I’m fine with that. Get a few solid radio guys, a real play-by-play man, a younger man if you want, someone who can grow with the fanbase and establish a reputation. But please take Dickerson off the radio waves.

Television is a medium where you don’t have to describe the action, you just need to enhance the visual feast before us. Luckily for the Tigers, Dickerson has not been describing the action for years. He’s our man!