Three questions facing the Tigers as the season draws near 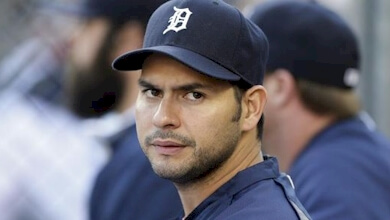 How much can the Tigers expect from oft-injured starting pitcher Anibal Sanchez ?

Two weeks remain until Opening Day in Miami, and the Detroit Tigers still have a few crucial matters to sort out. Here are three things to keep your eye on as spring training winds down for Brad Ausmus and his team:

The health of Victor Martinez

Don’t buy the official line that there’s absolutely no concern. V-Mart has sat out a few games of late with what was described as a mild hamstring strain. But for anyone his age who is recovering from ACL surgery, anything happening to his legs is more than a mild concern. Remember, V-Mart crouched behind the plate for many seasons—and like any old catcher, all that wear and tear is as much a part of his legs as bone and muscle. And this season, even a nagging small injury to the Detroit cleanup hitter will be just as devastating to the team’s chances as his gimpy legs and weak bat were in 2015. Sure, Brad Ausmus can find a way to get by without Victor in the lineup—he can rotate others into the DH spot. But the overall effect on the offensive production would be profound. It’s like saying a ship can sail with a gaping hole in the hull— you can patch it up, but it’s going to take on water.

The bottom three-fifths of the rotation

Justin Verlander anld Jordan Zimmerman—no worries. The rest of the starting staff—question marks abound. Anibal Sanchez is just this week making his first start of the spring— his first game action in seven months. He’s been battling the same injury that doomed him to a mediocre performance last season—triceps inflammation. The Tigers would love to have something approaching the Sanchez of 2013 back again (182 innings, 2.57 ERA)—but can they hope for anything even close to that? Sanchez is thirty-one, and he’s going to need more recovery time. The Tigers won’t need five starters until the second of third week of the season, and that should be enough time for Sanchez to round into form. We’ll get our first indication this week of whether that’s a realistic timeline. The rest of the rotation features a journeyman innings-eater (Mike Pelfrey) who won’t blow anyone away. If Detroit fans think the club can succeed with him as a No. 3 or No. 4 starter, they’re kidding themselves. Then there’s that guy who lives in a van and is recovering from cancer and is still barely old enough to grow a beard. Great story, and Daniel Norris has a high ceiling—but the question is how close he can come to reaching it this year. If he needs more time in the minors, there’s—ugh—Shane Greene. Unless the club wants to call Michael Fullmer back up again and hand him the starter job he’ll eventually win anyway. I say, why the hell not? Answer: because they shelled out $8 mil for that other placeholder named Mike.

Filling out the bullpen

Detroit is trying to fill out the rest of their bullpen behind new closer Francisco Rodriguez and new set-up man Mark Lowe. Those two veterans should be fine, though they’re both on the wrong side of thirty. Justin Wilson is a lefty who pitched nearly 200 innings out of the Pirates and Yankee pens over the last three seasons and had ERAs of around two, four, and three—in other words, a lock. Alex Wilson had a fine season in 2015, but can he repeat it? Blaine Hardy also wore down at the end of the season, so the jury is still out on him as the second lefty. There’s also the long-running melodrama of the enigmatic Bruce Rondon, and the subplots of fellow twenty-four-olds Angel Nesbitt (currently down with an injury) and southpaw Buck Farmer (still learning what life is like in the big city after being down on the farm). Will Drew VerHagen claim a spot for this season, and if he does, so what? Watch the keen competition the last two weeks down in Lakeland in the game of musical chairs that is the modern MLB bullpen routine. Beyond K-Rod, Lowe, and the Wilson duo, at least four spots are up for grabs.