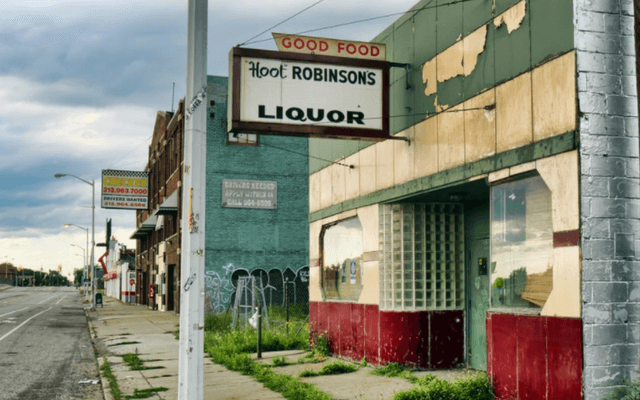 The famous Hoot Robinson’s is shown after it closed in the 1990s, located on Trumbull Ave. in downtown Detroit across from the former location of Tiger Stadium.

Earlier this month, construction crews working on the Checker Cab building redevelopment across from the site of old Tiger Stadium bashed a crack in the wall of the UFO Factory next door. Daylight streamed into the damaged nightclub, which was quickly closed and could now be condemned.

The accident raised suspicions: the UFO Factory had recently sued the developer over the use of its surrounding land, but the case was dismissed. Was this revenge? (Soave Enterprises, the developer’s parent company, claimed the damage was an accident and donated $15,000 to a GoFundme page for UFO Factory employees.)

If the UFO Factory does have to come down, it will be another loss of baseball history on Trumbull Avenue. It might not be obvious when you first glance at the hipster nightclub with its coat of pink paint, but this building has deep roots in Detroit baseball history: it used to be Hoot Robinson’s.

“Mandatory stop an hour or so before game time,” Paul Vasey recalled in his 2013 book “The River: A Memoir of Life in the Border Cities. “The place was long and narrow. Bar on one side, kitchen at the back. Beer cases stacked from the floor halfway to the ceiling. The beer was always cold, the dogs and burgers were always good, and the men’s john featured a trough urinal—must’ve been about twelve, fifteen feet long—which Hoot filled with buckets of ice. Hoot was the old guy behind the bar: White hair (what was left of it), thin, energetic, and always quick with a quip.”

Opened in 1938 as the Tiger Cocktail Bar, Hoot Robinson’s Bar and Grill catered to Tigers and Lions fans for decades on their way to, from, and during games at Tiger Stadium. Like the historic stadium itself, Hoot Robinson’s was cramped, nondescript, and nurtured a close connection between working class fans and their sports heroes.

“I remember cheering on Bobby Layne after he left Robinson’s across the street, then watching him go on the field to play,” longtime Lions season ticket holder Willie Stone told DetroitLions.com in 2011. “[H]e played great. He was one of the greatest quarterbacks I’ve ever seen.”

It’s widely reported that Babe Ruth drank at Hoot Robinson’s, and Hoot himself reportedly bragged to patrons about serving Ruth. If he did, it was next door in the Checker Cab building, where Hoot first ran a restaurant from the 1930s to the 1950s. (The Free Press obituary for Robinson said he opened his Checker Cab place in the “mid-1930s,” and Ruth retired in 1935, so the Babe could have bellied up to Hoot’s bar.) Stories about Ruth made Hoot Robinson’s seem like Detroit’s answer to the legendary McCuddy’s in Chicago, which stood across the street from old Comiskey Park—close enough for the Babe to famously access between innings.

At least one Tigers pitcher wouldn’t take the field without a meal from Hoot Robinson’s. Dizzy Trout pitched for the Tigers throughout the 1940s, when Hoot’s joint was still located in the Checker Cab building. “As part of his preparation in the clubhouse on days he was the starting pitcher, Trout would wolf down two of Hoot’s sizable pork chop sandwiches chased by a bottle or two of carbonated beverage,” recalls former batboy Dan Dillman in his delightful memoir Hey Kid! A Tigers Batboy Remembers. (Dillman’s duties included fetching food from Hoot’s for any player who asked.)

Dillman remembered when Trout’s pregame meal once announced itself during a game. “Trout bent over to get the catcher’s sign for the next pitch,” Dillman writes. “Then it happened—a prodigious belch erupted from his mouth, spewing tobacco juice across the front of the white home jersey with the Old English D.” Stunned, catcher Bob Swift asked Trout if he’d just thrown up.

“No,” Trout replied. “But Hoot’s pork chops sure taste better the second time around.”

Hoot Robinson moved his restaurant out of the Checker Cab building in the 1950s, taking over the home of the Tiger Cocktail Bar next door, and remained there for over 40 years. In 1994, the players’ strike aborted the Tigers’ season in mid-August, curtailing traffic on Trumbull. Robinson closed up shop for good in September, and died three months later at age 87. The building stood vacant until 2014, when the UFO Factory moved in, along with hot dog joint Laika Dog, helping to signal the resurgence of Corktown. Now they may have to move out, and the walls that echoed for decades with the cheers of Detroit fans may come down.