Cubs and Tigers are intertwined in baseball history 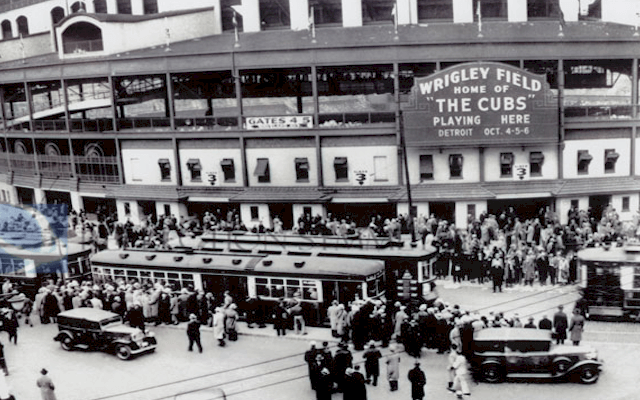 Fans file in to Wrigley Field for Game Four of the 1935 World Series between the Cubs and Tigers.

On Saturday night the Chicago Cubs won the pennant for the first time in 71 years, basically a lifetime. The last time they were in the Series they faced a familiar foe, a team they’d faced before in the Fall Classic and a team whose history is intertwined with theirs in many ways.

This time the Cubbies will not be facing the Detroit Tigers in the World Series, but four previous times they did, and those matchups are steeped in history.

It’s impossible to discuss the postseason history of the Cubs without talking about their battles with Detroit. In fact, the last two times that the Cubs played in the Series (prior to 2016) they faced the Tigers. And the only two times they’ve won the World Series it was against Detroit. As a matter of fact, when Chicago last won the title, it was known as the “World’s Series.”

1945: The Curse of the Billy Goat and Prince Hal

In 1945 it was a man named Bill Sianis who wanted to bring his pet billy goat to Game Four of the Series at Wrigley Field. But the Cubs cried foul and wouldn’t let the Chicago saloon keeper in with his furry friend. Sianis responded with venom, promising that “the Cubs will lose, they won’t win again.”

The Cubs did lose Game Four and Game Five at Wrigley, but they came back to win Game Six to force a deciding seventh game. That year the last four games were played in Chicago to reduce the amount of travel by the two teams.

In Game Seven, the Tigers had their ace, “Prince Hal” Newhouser, on the hill. The lefthander didn’t have his best stuff in Game Seven, but his teammates put up five huge runs in the first inning off Hank Borowy (pitching on two days rest). Newhouser scattered ten hits and beat the Cubs 9-3. That game, played October 10, 1945, was the last World Series contest for the Cubs until 2016.

1935: Tigers win first title at expense of the Cubs

The Tigers were making their second straight appearance in the World Series in ’35 with a team built around stars and characters. The core of the team was the “G-Men” lineup featuring Charlie Gehringer, Hank Greenberg, and Goose Goslin, future Hall of Famers all.

The Cubs were a scrappy team that had pulled off an incredible comeback to win the pennant. On July 4th they were 10 1/2 games behind the New York Giants and in fourth place. After that, the Cubs went 24-5 the rest of July to crawl into contention. In September the Cubs won 21 games in a row. Yes, 21 damn games in a row, to soar past their competition and win the pennant. (No Cubs team has ever won more consecutive games)

The World Series should have been a great matchup: the Cubs led the NL in runs scored and ERA, and the Tigers led all of baseball in runs and were second in the AL in pitching. But after splitting the two games in Detroit, the Tigers won Games Three and Four at Wrigley to take a commanding 3-1 series lead. Game Three was thrilling: Detroit scored four times in the top of the eight to take a two-run lead, but when they inserted ace Schoolboy Rowe in relief to finish it off in the ninth, the Cubs pushed across two runs to tie it and send the game to extra innings. In the top of the 11th, Chicago’s Freddie Lindstrom, who started the game in center but moved to third after the lineup was shuffled for pinch-hitters in the ninth, booted a ground ball for an error. The Miscue led to an RBI-single by Detroit’s Jo-Jo White with the go-ahead run and Rowe set down the Cubs in order for the win.

In Game Six back at Navin Field, Goslin had the biggest hit of his career, lining a single to right field that scored his manager Mickey Cochrane with the winning run for Detroit’s first world championship.

The 1908 Cubs were a great team and they put a whuppin’ on the Tigers in the “World’s Series,” as it was known in the Theodore Roosevelt era. The Cubs biggest challenge in ’08 was the New York Giants, their rivals in the National League. The Giants and Cubs battled in a pennant race that season and one of the most bizarre incidents in baseball history helped swing the flag to the Cubbies.

In a game played at the Polo Grounds the Giants won on an apparent walkoff hit, but Chicago second baseman Johnny Evers, a sharp little baseball nugget, retrieved the ball and stepped on second base after he realized the runner who had been on first (Fred Merkle) did not advance to the bag. As a result, the force play was in order and the third out was called. After a major dustup between Giants’ manager John McGraw and the umpires, the game was declared a tie and would only be replayed if it had an impact on the pennant race. Of course it did, and when it was replayed, the Cubs won their 99th game and edged the Giants for the pennant.

After that drama the Cubs were relaxed and proceeded to pound the overmatched Tigers in the World Series, winning in five games. The Cubs scored 10 runs in Game One in Detroit, which in that era was like scoring 1,000 runs. The stars of the team were: the pitching staff, led by Three Finger Brown (who lost part of his pitching hand in a farming accident as a boy), and Orval Overall; and the dynamic infield trio of shortstop Joe Tinker, second baseman Evers, and first baseman (manager) Frank Chance. It was the second straight title for the Cubs, and the last time they’ve won.

This series was marred by a ticket-scalping scheme in Chicago that kept fans away from the ballpark. The finale drew only 6,200 fans, the smallest crowd ever for a World Series game before or since.

The Cubs won the series easily in five games, one of them a tie. In Game One, the Detroit starter, boisterous fun-lover named Wild Bill Donovan, struck out 12 Cub batters, which was a lot on those days. But the game went 12 innings and was called due to darkness. The Tigers never got as close to winning again in the series.

Detroit scored only three runs in the last four games of the Series as their fearsome offense was shut down. Young Ty Cobb, just 20 years old and the batting champion, went 4-for-20 against Chicago pitching. Meanwhile, the Cub pitching staff allowed just four earned runs in the five games.

This was the first World Series title for the Cubs and sweet redemption for them after having won 116 games the previous year but losing the Series to the crosstown White Sox.