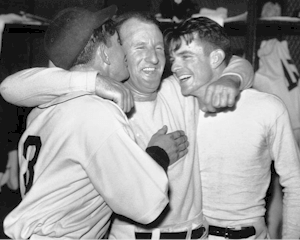 Mickey Cochrane gives hero Goose Goslin a kiss in the clubhouse after Game Six of the 1935 World Series. Winning pitcher Tommy Bridges is on the right.

Looking backward, the Detroit Tigers have one of the longest World Series championship droughts in baseball.

Among teams who have won the World Series in the past, only the Cleveland Indians (1948), Pittsburgh Pirates (1979) and Baltimore Orioles (1983) have longer droughts than Detroit’s (1984).

This year’s World Series pits the Dodgers, who last won in 1988, against the Houston Astros, who have never won.

We often think of droughts this way, going backward. That is especially easy for extremely long ones like the Chicago Cubs, Boston Red Sox and Chicago White Sox, which all ended significant droughts, some would say cursed droughts of more than 80 years in the past dozen years.

But droughts in baseball worked in the opposite directions. There were plenty of droughts that started when the World Series started.

The Brooklyn Dodgers took more than 50 years to win and won just once in Brooklyn before moving to Los Angeles. None was worse than the Philadelphia Phillies, who, though an original team in the National League, did not win the World Series until 1980.

The Tigers have never really been leading this list from either direction, but have had significant droughts on either end.

While 1984 is a long time ago, it is not as long as three other teams, and before last year, no team could really talk about droughts except the Cubs and Indians. Cleveland still holds by far the longest one.

It is easy to forget that 1984 was more than 30 years ago, especially since the Tigers won pennants in 2006 and 2012, and have been to the postseason several times since 2006. But it is still a significant drought.

The Tigers also didn’t have a long drought getting to the World Series from the beginning. Detroit was in the fourth ever World Series in 1907 and would return in 1908 and 1909. But the Tigers only won pennants in those years. They did not win the World Series.

Detroit would not win its first World Series championship until, 1935, losing one more series in 1934, before finally hoisting the trophy.

The Boston Red Sox won five during that span, all by 1918, and the New York Giants won four during that time. The St. Louis Cardinals and Philadelphia Athletics won three, while the Chicago Cubs and Pittsburgh Pirates won twice apiece.

So there was no one juggernaut taking control as in later decades.

The Tigers were also not abysmal during this time. Many teams with droughts, especially the Cubs, Phillies, Indians and White Sox, had decades of futility. Not Detroit, for the most part. The Tigers won pennants in 1907-08-09 and actually had their first 100-win season in 1915, going 100-54, but somehow finished 2 1/2 games behind the Boston Red Sox.

Those teams were managed by Hall of Famer Hughie Jennings and had two of the best hitters in the game — Ty Cobb and Sam Crawford — roaming the outfield, while pitchers Wild Bill Donovan and George Mullin were among the league’s best.

The Tigers had a couple of lean years, finishing as low as seventh before bouncing back to finish second to the Yankees in 1923, led by Cobb and another Hall of Fame outfielder, Harry Heilmann, who won his second of four batting titles that year, reaching .403.

Detroit would then have a few more down years, again finishing seventh in 1931. But the 1930s brought a new generation of stars led by Hall of Famers Charlie Gehringer, Mickey Cochrane and Hank Greenberg.

With Cochrane also managing, the Tigers added another Hall of Famer to the lineup, snagging outfielder Goose Goslin, and the Cooperstown quartet led the Tigers to the 1934 pennant. The Tigers were one game away from finally ending their drought that year, losing to the St. Louis Cardinals in the World Series — in the seventh game.

The Tigers faced the Cubs in the World Series and won in six games. Tommy Bridges won both starts, including a 4-3 win in Game Six to clinch the series. And since there was no TV and many of us were not alive that year, we forget about the exciting climax as Goose Goslin singled in Cochrane in the bottom of the ninth for a walk-off ending to the series — and the drought.

It has been 33 years since the Tigers have won the World Series. We’ll see how long this drought continues, and if it ends in as exciting fashion.