The Tigers have never had a designated hitter like Victor Martinez 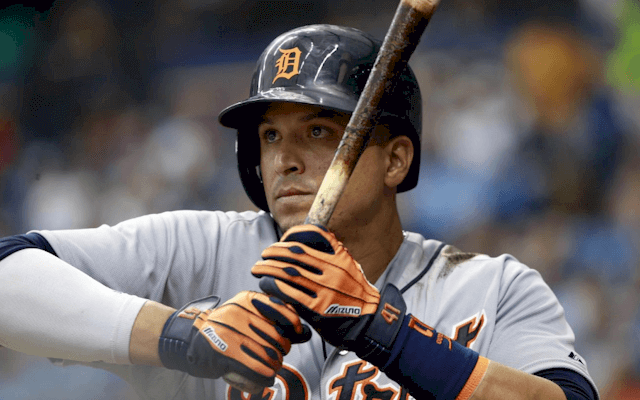 Designated hitter Victor Martinez is a career .300 known for being a great run producer and valuable team leader in the clubhouse.

If patience truly is a virtue, as the old saying goes, then Victor Martinez is well-stocked with virtue. The switch-hitter employs a patient, deliberate, and thoughtful approach to the craft of hitting. He leaves nothing to chance, every movement and every part of his batting ritual is designed to prepare him for a battle with the pitcher.

In 14 seasons through 2016, the Venezuelan-born Martinez has established himself as a “supremo bateador profesional.” In eight of his seasons he’s topped the .300 mark and he’s consistently proven his mettle as one of baseball’s best run producers. “VMart” has driven in 100 runs five times. Even in a lineup that includes Miguel Cabrera, Martinez is often pitched around when runners are on base.

In an era when even the weakest hitters are swinging and missing a lot, Martinez is a rarity: a man who makes contact. In his best season, in 2014 for the Tigers, Martinez struck out only 42 times despite launching 65 extra-base hits including 32 home runs.

When he first arrived in the majors as a 23-year old rookie for the Indians, Martinez was a highly-prized catcher. He was adequate behind the plate and worked well with his pitchers, but the real bonus was his bat, one he could swat from both sides of the plate. It’s rare enough to find a catcher who can be a middle-of-the-order hitter, but finding one that can switch-hit is like locating a white peacock.

In his seven-plus years with Cleveland, Martinez was an All-Star three times and he also lugged away a Silver Slugger Award. In an Indians’ uniform, Victor was a thorn in the side of the Tigers, smacking eleven homers and driving in 50 runs in less than half a season worth of games against Detroit. Head baseball guru Dave Dombrowski filed Martinez’s name away and watched as the switch-hitter advanced to Boston, keen on someday making him a member of the Tigers.

That chance thankfully arrived when VMart became a free agent after the 2010 season. On the day after Thanksgiving, Dombrowski got Victor’s name on a contract and brought the slugger to Motown. By this time, Martinez was spending most of his time as a designated hitter. But that was fine with the Tigers seeing as how well Martinez can hit the sphere.

It was no coincidence that in each of the first four years that Martinez was a Tiger, the team won the division title. The veteran hitter slotted nicely in front of or in back of Cabrera in Jim Leyland’s lineup.

“Victor is the most prepared hitter I’ve ever had,” Leyland said in 2013. “There isn’t a single at-bat that he takes off, and that’s special.”

How consistent has VMart been? He’s hit .302 for the Tigers, with a mark of .305 at home and .300 on the road. He has a .298 mark from the left side and .306 from the right. In the playoffs he’s batted .331 in five series for Detroit. Martinez is one of those guys who can fall out of bed in December and hit a cool three-fifteen.

Martinez has been so good that some people have refused to believe it’s true. A few years ago members of the White Sox thought Martinez was getting extra help. They accused the Tigers of relaying signs to Victor while he was at the plate at Comerica Park. Manager Brad Ausmus had a clever retort. He wondered who was helping his designated hitter on the road, since Victor’s batting mark away from Detroit was over .370 at the time.

Through the years the Tigers have had a steady flow of fine DHs. First there was the popular Gates Brown, a pinch-hitter with few peers. Then came Willie Horton, followed by Le Grande Orange, Mr. Rusty Staub, like Martinez an RBI machine. The 1980s brought Darrell Evans, who became the oldest man to win a home run title. “Big Daddy” Cecil Fielder spent time at DH for Sparky in the 1990s, as did the switch-hitting tower of power, Tony Clark.

But of all the Tiger designated hitters, Martinez ranks at the top, for his production and clutch hitting. Thirty percent of his career homers have come with runners on base, and with a runner on third with less than two outs, VMart has delivered the runner 73 percent of the time. Those figures are well above the normal rate. Oh, and with runners on third with less than two outs, Victor has a cool .399 career average.

After inking a four-year deal with Detroit after the 2014 season, VMart most likely assured he will end his career as a Tiger. By the final year of the deal he will be 39 years old, and some critics have questioned whether his body can hold up that long. But given his dedicated, almost religious focus on the art of hitting, it’s probable that Martinez will still be in the middle of the lineup for Detroit spraying line drives, just like a professional hitter is supposed to.