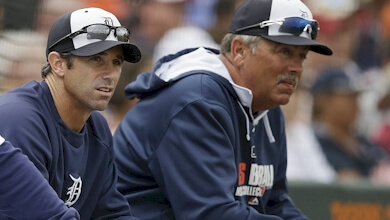 Manager Brad Ausmus and pitching coach Jeff Jones have a lot of work to do to fix the pitching for the Detroit Tigers.

The Detroit Tigers pitching staff was a disaster area this season. If the club is going to return to contention in 2016, there is major work to be done rebuilding the rotation and the bullpen from the ground up.

There’s nothing seriously wrong with the Tigers’ offense. The everyday lineup is pretty potent. Only injuries and a question mark over Victor Martinez’s production were concerns this season.

But by most meaningful measures the Tigers were the worst pitching team in the American League in 2015. League average ERA was 4.05 this season, and Detroit was nearly half a run above that at 4.46. If you look just at all runs allowed, the staff looks even worse—it gave up 803, fifty more than the next-worst team, the Boston Red Sox, and 118 more than league average.

The Tigers’ pitching staff served up by far the most home runs in the league in 2015, 193, compared to a league-average 170. They issued twenty-five more walks than league average and struck out 1,100 batters compared to an AL average 1,228.

The league average in WHIP—the most basic measure of pitching effectiveness, calculating how many base runners pitchers allowed per inning—was 1.29. The Tigers were at 1.37.

And they had only a few pitchers below the league average in WHIP.

If you consider that 1.19 defines the mediocre AL pitcher in 2015, Detroit had only a handful of pitchers who performed better than that. David Price and Joakim Soria were well below that, with WHIPs of 1.11 and 1.05 respectively for their time as Tigers—but of course they are both long gone.

What other pitchers on the team were significantly better than team average? Justin Verlander was, at 1.09. Alex Wilson was, at 1.03, Daniel Norris, with only eight starts and thirty-seven innings, racked up a very nice 1.009 WHIP.

Drew Verhagen makes the cut too, at 1.21, but with only twenty-six innings, you can’t rely on that being a really accurate measure.

Anibal Sanchez was almost exactly league average, with a 1.28 WHIP, but because so many of his hits allowed went over the fence, you can’t really count him as better than mediocre either.

In other words, apart from Verlander and Wilson—and the promise of rookies Norris and maybe Verhagen—the Tigers pitching was putrid in 2015. On paper, it doesn’t look good for next year either—unless there are a lot of changes.

The bullpen needs a total rebuild. There is no reliable closer. There isn’t much else either. For how many more years will fans wait for Al Alburquerque to get it together and stop walking batters? The starting rotation is JV and Norris and a hope for a return to form for Anibal Sanchez.

Good as he was once in awhile, the club cannot afford another year with Alfredo Simon as its leader in innings pitched. He had a WHIP of 1.44 and an ERA of 5.05! He doesn’t really belong in a major league rotation. And it doesn’t look like Matt Boyd is ready yet. Will Sanchez return to form? Who knows? The Tigers need at least two more starters.

Management should consider not only a total revamp in personnel but also take a very close look at whether the assets they have can be better utilized, perhaps by taking an unorthodox approach to the bullpen. Simon was a decent reliever for a number of years. The Tigers should consider using Simon and Wilson as bridges from the sixth to the eighth inning. Both can pitch multiple innings effectively and should be pitching well over 100 innings a year in relief! If you stick with the same game plan and bring back the same personnel, you will be guaranteeing another losing season. Radical change is necessary.