Is this Tigers team worth caring about? 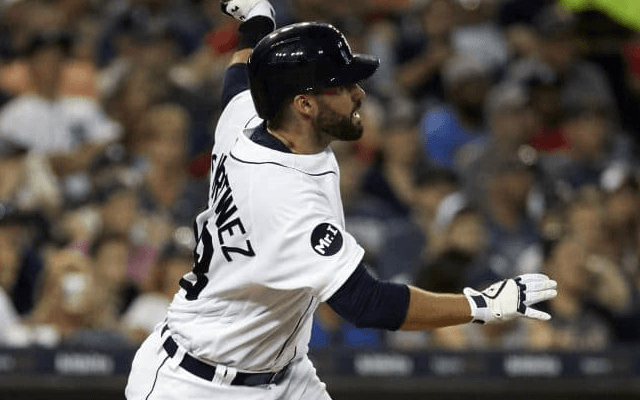 After recovering from an injury, J.D. Martinez has had a good season for the Tigers.

For many fans, the 2017 Detroit Tigers are difficult to watch.

The Tigers seem void of passion, without an identity. Now past the midway mark of June, and nearly 70 games into the season they’re floundering near .500, lodged in a tight pack in the AL Central division. The team can’t seem to get in a groove. They win one, lost two, win two, lose three, and so on. Most alarmingly, they play uninspiring baseball.

Who is their leader? Where is the emotion? When will they start to display urgency? Can they show us who they are?

Unfortunately, the Tigers have adopted the bland, emotionless personality of their manager. Brad Ausmus has one speed: 55 miles per hour down the middle of the road. He’s milquetoast. He’s like a robot set to “neutral”.

The Tigers wear a “Mr. I” patch on their left sleeves. But they don’t show any of their heart on their sleeves.

It starts with the stoic Ausmus. When the team loses a series to the woeful White Sox, where is the kick in the ass? When the lineup fails to move runners along, why is Ausmus non-committal in his criticism? When will he ever make changes to shake things up instead of sticking with the same-old same-old? Where’s the leadership? When do things get bad enough that Ausmus will tell us what he really thinks about his team?

Some might say the Tiger skipper’s strength is his steady demeanor. He doesn’t get high, he doesn’t get low. But if there’s ever been a team that needs to fire up, it’s these Tigers.

Can you imagine what Kirk Gibson or Alan Trammell or Jack Morris would be like if they were on this team? Do you think a mediocre record in mid-June would pass the muster with Trammell? Do you think Morris would hold his tongue if his third baseman missed another ball that most players would have turned into an out? How do you think Gibby would respond if a teammate made a baserunning mistake?

This Tiger team has a few great players, albeit neither of them are in their prime. Miguel Cabrera will have a plaque in Cooperstown one day. Justin Verlander could. Both have closets filled with awards. Both have earned more than enough money to live comfortably for several lifetimes. But work hard at their craft. I’m not denying their effort between the lines. But neither Miggy nor JV is a vocal team leader. They don’t have that “leadership gene.”

This team needs a leader who won’t accept mediocrity.

The Tigers have one of the five highest payrolls in baseball. They have the talent to win the weak division they play in. Despite the failures of the defense and the bullpen, they should be capable enough to overcome that adversity. But they continue to flounder around the break-even mark. It would be one thing if the team was fighting their way through the schedule. Instead, they same to be playing out the string before they even get to the All-Star break.

Ausmus and general manager Al Avila share a lot of the blame for the weak-hearted, uninspiring team they’ve created. They are to blame for the hole in center field, for continuing to run out pitchers who should be sent down to Toledo. And yes, they’re to blame for not demanding more from their high-priced club.

Guys named Hicks, Presley, and Mahtook are chewing up at-bats for this club. When is Avila going to do something to add MLB quality depth to his roster? Ausmus keeps running out starting pitchers who allow five runs one start and four the next, as if that’s acceptable. The Detroit manager continues to use this nightmarish bullpen in the formulaic manner that assumes the sum of the parts will add up to something worthwhile.

Does anyone honestly think this team as it’s constructed right now, and with the lack of emotion it displays, can go into the playoffs and win?

By July 4th we’ll know whether the Tigers are summer-worthy. On that red-white-and-blue holiday we’ll be able to determine whether we should invest our time watching this baseball team or if it would be better to go to the beach. We can either get burned by the Tigers or the Michigan sun, it’s our choice.