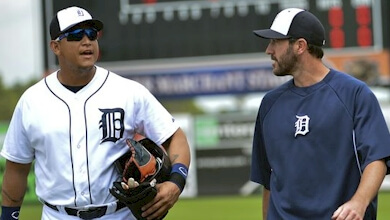 The large contracts of Miguel Cabrera and Justin Verlander strap the Tigers with a big salary, but the team also must invest in young players for the long term.

A majority of this year’s payroll is committed to seven players who will collectively get paychecks of $144.9 million this year—Miguel Cabrera and Justin Verlander ($28M each), Justin Upton ($22.1M), Jordan Zimmermann and Victor Martinez ($18M each), Anibal Sanchez ($16.8M), and Ian Kinsler ($14M). These seven players range in age from twenty-eight to thirty-seven, averaging more than thirty-two years old.

Under Dave Dombrowski, Detroit built a championship-caliber club but one that is now stuck with huge contracts for aging players, some accumulated during his tenure, while Upton and Zimmermann were inked to deals after his departure. The window for a world championship is now rapidly closing, unless the Tigers somehow find some cheap young players to combine with the veterans and produce instant success.

Detroit served notice it wants to compete at least through 2017 by agreeing to terms with J.D. Martinez, who like Upton is twenty-eight, on a two-year contract. He’s signed for $6.75M this year and $11.75M next year, which could prove to be a bargain. Kinsler’s salary in 2017 is slated to go down by $3M, almost offsetting J.D.’s $5M increase.

Since they were already spending that much money, it made a lot of sense this off-season for the Tigers  to add closer Francisco Rodriguez for $7.5M and setup man Mark Lowe for $5.5M to solidify the back end of the bullpen. It’s not as obvious that Detroit needed to add utility man (and right-handed stick) Mike Aviles for $2M—they could easily have found another jack-of-all-trades with a lefty bat for less than that somewhere. And though another dependable starter seemed necessary for this season as other options such as Matt Boyd and prospect Michael Fulmer continue to mature, it seems a waste to give mediocre journeyman Mike Pelfrey $8M. But obviously right now the the club has to go all in—and what’s another eight mil to Mike Ilitch at this point?

The Tigers are going to have to start looking more long-range soon, however, and start allocating more money to player development. When they shed the huge contract of David Price, traded Yoenis Céspedes, and let Joakim Soria go at the trade deadline last season, that seemed to be a start in that direction—they were able to gain a bunch of young players in return.

Staying in contention and starting the rebuilding process for future years are difficult tasks to pull off at the same time—but the Tigers aren’t alone in attempting it (the Yankees are trying to do much the same thing). If things go south again this season for Detroit, expect them to try to pull off trade deadline deals in late July. The problem, however, is that the club has little left to trade for future prospects. Nobody will want to take on the burdensome contracts of Miggy, JV, or VMart. And the club will probably want to keep the likes of Kinsler and Zimmermann for another season—and Sanchez, too, if he bounces back.

In the Dombrowski Era, the Tigers raised fans’ expectations to a level commensurate with the big-spending club they are now—a far cry from what they used to be in Detroit, which for most of its history better fit the profile of a hungry underdog than a big spender. More than thirty years since their last world championship, it will be a formidable task to get back on top. This year, however, there doesn’t seem to be another powerhouse team in the American League—so there’s always a chance. Also, in modern baseball 82-85 wins puts a team in the playoff race. If they’re still in contention for one of the five playoff spots in late July, maybe the Tigers will be buyers again, but this time for veteran help. You never know which way the winds will blow, especially when Detroit is being pulled at once in two contrary directions—win now, but also rebuild.