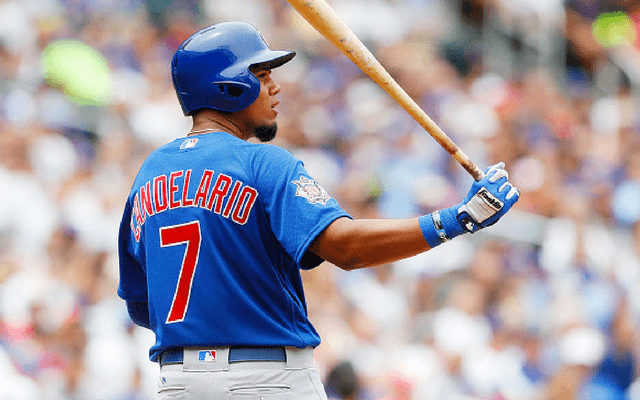 Jeimer Candelario, acquired from the Cubs at the trade deadline, will be in the Tiger lineup in 2018.

Following the bang-bang trades of the two Justin’s (Upton and Verlander) just prior to the waiver trade deadline, it’s obvious that the Detroit Tigers are in rebuild mode.

Recent history shows us that teams can reload rather quickly if they make wise decisions. There’s no need to tear everything down and completely destroy a roster when 82-85 wins can get you into the playoff dance.

But the Tigers do look a bit long in the tooth and in 2018 they’ll have to give playing time to some younger players. While it’s true that the Detroit farm system has been a black hole for years, there are some players down there who could fill MLB positions as soon as next spring. Here are three possibilities.

Baby Ruth will knock Castellanos off third base

The biggest prize the Tigers received from the Cubs in their deadline deal that sent Alex Avila and Justin Wilson to Chicago was infield prospect Jeimer Candelario. The switch-hitter is ready for the big leagues right now and his best position is the hot corner.

Candelario is ranked as one of the ten best third base prospects in baseball, based almost solely on his ability to hit the baseball. The Cubs tried to find a defensive position for the player they call “Baby Ruth,” and he’s gotten at least serviceable at the hot corner. The problem, of course is that the Tigers have Nicholas Castellanos.

How high are the Tigers on Candy? They have already asked Castellanos to grab his outfielder’s glove and work on that position in preparation for a shift to the outer pasture. It makes sense for Nick to go to right field, where the team doesn’t have a good prospect, to fill a hole. That would clear the way for Candelario to take third next spring.

Candelario will turn 24 the week before Thanksgiving and he has a good chance to be a very good offensive force in the big leagues with 20-homer power.

Room will have to be made in the outfield for Stewart

It’ll be interesting to see how the Tigers manage their outfield in the near future. Many factors are in play. Most importantly, left fielder Justin Upton can opt out of his contract and become a free agent this winter if he chooses. Seeing as he’s having one of his best seasons and hitting like Rocky Colavito in the second half, it’s very possible J-Up will go for the big money and exit Motown.

Then there’s the apparent hole in center field, a problem the team didn’t address last spring after jettisoning Cameron Maybin. We kept waiting for Al Avila to make some sort of significant move to fill center, but instead the spare part Mikie Mahtook won the job, eclipsing JaCoby Jones, who also was given a chance to earn the spot. Mahtook has been better than expected, but the feel-good story of 2017 is not a long-term solution in center field. His surprising play might earn him the job to start ’18, but his grasp on it will be soft.

Castellanos will most likely end up in right field, where placeholders John Hicks and Alex Presley did a commendable job this season. There’s also farm hand Michael Gerber, who can play any of the three outfield positions but isn’t projecting as a big offensive player at the top level. Either Jones or Gerber, if they stay in the Detroit system, could get a job in 2018.

That brings me (finally) to Chrsitin Stewart, a lefthanded hitting left fielder who has 28 homers for Erie this season. Stewart has reportedly shortened his stroke to cut down on strikeouts, and he projects to be a middle-of-the-order guy in The Show. His path would be blocked if Upton decides to stay in Detroit, but he’ll be 24 on opening day in 2018 and the Tigers have to start thinking about giving him some experience against big league pitching.

I’m guessing Upton will bolt Detroit for a long-term deal, leaving left field open for Stewart. Plug in Mahtook in center (or Avila could make a deal to get someone for that position), and Castellanos goes to right. That gives the team a very different outfield look than a year ago, but a promising one.

After impressive audition, Machado will get the shortstop job

In spite of their disappointing 2017 campaign, the Tigers offense is not terrible. They rank in the middle in runs scored this season and that’s with Miguel Cabrera, Victor Martinez, and Ian Kinsler all having down years. But on the defensive side of the ball, the Tigers are (once again) poor.

One exception is shortstop Jose Iglesias, who is playing Gold Glove-caliber defense. But even so, Detroit will probably trade him this offseason. There are two reasons: (1) the 27-year old Iglesias will never be more valuable than he is now, and (2) the team is high on Dixon Machado.

Machado was pressed into service as the Tigers utility infielder this season and he’s turned heads in the organization. According to some inside the Tiger front office, Machado’s defense is only a tick below Iglesias’ level. And Machado’s bat is much, much better. Some in the Detroit system feel Machado has a stronger and more accurate arm than Iglesias, who can sometimes try to do too much in the field.

Machado is too good to be a backup middle infielder. He stings the ball pretty well and could easily improve on the anemic offense that Iglesias brings to the dish. And his defense is still above average at short.

It’s very possible that the Tigers will use Iglesias as a trade chip this offseason to get bullpen help or to add depth to the organization. Even with his flashy glove, Iglesias won’t fetch much, but if Avila is going to move him, now is the time.