The Tigers won three straight games on walkoff homers in 2004 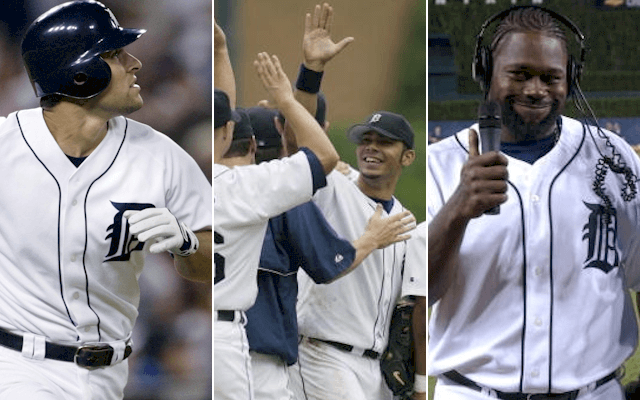 Eric Munson, Carlos Pena, and Dmitri Young had walkoff homers in three straight games for the Detroit Tigers in 2004.

All wins are not equal. Some are more thrilling than others. Even in the regular season for a 72-win team.

In 2004 the Tigers thrilled their fans at Comerica Park with not one, not two, but three drama-soaked wins in a row.

The date was Saturday, June 26, 2004. The Detroit Tigers were coming off the worst season in American League history, having lost 119 games.

With a record of 33-39 so far, manager Alan Trammell’s men were a much-improved team (not a hard thing to do when there is nowhere to go but up). Detroit was in fourth place in the American League’s Central Division, eight games behind the Minnesota Twins, a solid team. The Kansas City Royals, at 28-42, brought up the rear.

The Tigers were playing an interleague game against the Arizona Diamondbacks, who were struggling along with a 27-46 mark. On the hill for Detroit was 21-year-old Jeremy Bonderman, seeking his sixth win against six losses. The D-Backs countered with Casey Fossum, a former first-round pick out of Texan A&M.

Both starters struggled. Fossum did not last through the fifth, and Bonderman was lifted after seven frames with his team trailing 6-5. In the bottom of the seventh, however, Tigers second baseman Omar Infante homered off right-handed reliever Scott Service, tying it up.

That is how things stood until the bottom of the ninth, when Detroit third baseman Eric Munson led off with a home run, his ninth, off former Tiger Brandon Villafuerte. Reliever Ugueth Urbina got credit for the walk-off win, before 33,579 at Comerica Park.

It was a thrilling way to end it, but the Tigers had only begun.

The next day’s game featured Mike Maroth, loser of 21 games for Detroit the year before, and 38-year-old knuckleballer Steve Sparks, a former Tiger now finishing out his career in the desert for Arizona. Once again, both starters were ineffective. Carlos Guillen’s double in the bottom of the seventh drove in Bobby Higginson, tying the game at five. And once again, Detroit came to bat in the bottom of the ninth with the game deadlocked and Villafuerte on the mound.

But he faced only one batter, Infante, who doubled. That brought on a new pitcher, Mike Koplove, who gave up a long fly ball to center field by Higginson, allowing Infante to advance to third.

Arizona decided to intentionally walk both Guillen and Dmitri Young to set up a force at any base, and hopefully get a double play.

Rondell White, who had homered earlier in the game, struck out swinging. That brought up first baseman Carlos Pena. On a two-two pitch, the seventh of the at-bat, he launched a grand slam to give the Tigers their second consecutive walk-off home run.

After a day off on Monday, the Tigers welcomed to town the middle-of-the-road Cleveland Indians for a night game on the 29th. Detroit’s bullpen could not hold a two-run lead in the ninth, sending the game into extras tied at seven. Finally, in the bottom of the eleventh, Tiger catcher Ivan Rodriguez drew a leadoff walk against Jose Jimenez. Up came Dmitri Young, the Tigers first baseman and former All-Star. Incredibly, he launched another walk-off home run, Detroit’s third in a row. The 30,000+ at Comerica Park couldn’t believe it.

“When it was tied at seven,” Young said after the game, “I thought about another walk-off home run. I thought, ‘It could be me.’”

For Rodriguez, signed as a free agent in the offseason after a stellar career with the Texas Rangers, three wins by walk-off home runs was indeed something special. “I’ve never seen anything like this in all my years in the big leagues.” The man known as “Pudge” went 3-5 in the game, raising his major-league-leading batting average to .376.

“We needed it,” said Trammell. “It was a very big victory for us.” The Tigers won again the next day, their sixth in a row, to raise their record to 37-39. But a five-game losing streak immediately followed.

That summer, Detroit finished at 72-90, a 19-game improvement over the 2003 disaster. They were still a bad team, but over the span of four days in late June, they played like a team sprinkled with magic dust.