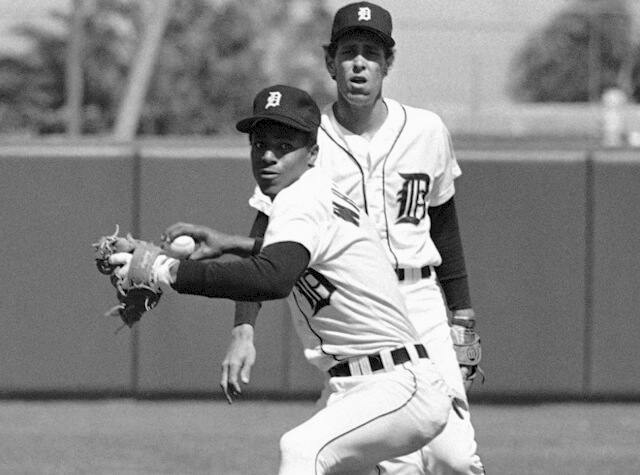 Lou Whitaker and Alan Trammell are two of the most qualified players for Hall of Fame consideration.

Early next month the results of voting for the Baseball Hall of Fame will be announced. Alan Trammell is on the ballot, but he won’t be elected. That shouldn’t be a shock to fans of the former Detroit shortstop. This is his fifteenth and final time on the ballot, and never before has Trammell received more than 36 percent support on a ballot. This despite being a favorite candidate among Tiger faithful as well as the statistic-minded fans who follow the history of the game.

While fifteen times is the limit for consideration on the baseball writers’ ballot, there is another way that Trammell can be elected — the so-called Expansion Era Committee. That well-cloaked group will meet at baseball’s winter meetings next November. At that time, Trammell’s longtime double play partner Lou Whitaker will be eligible for consideration by that committee. Trammell will technically miss the criteria to be on the expansion era ballot in 2016, he’d have to wait until 2019 (the committee convenes every three years).

Let me be clear: I strongly believe that both Trammell and Whitaker deserve to be elected to the Hall of Fame. Not only because they were the best and longest-running middle infield duo in baseball history, but because they each merit election based on their own credentials. This article aims to prove that to the voters who might find themselves on the Hall of Fame’s Expansion Era Committee in 2016 (for Sweet Lou) and 2019 (when Trammell will be eligible).

Trammell and Whitaker compare favorably with others from their era
The Expansion Era ballot considers players who made their primary contributions after 1973 and who have been retired for at least 21 years. That means players who were active essentially some time between the early 1970s and the mid-1990s.

I looked at all of the position players from that era and ranked them by Wins Above Replacement (WAR), which is generally acknowledged as the most advanced way to measure a baseball player’s career value. I removed those players who are already in the Hall of Fame and came up with this leaderboard:

That’s right, Sweet Lou ranks first and Trammell is third. They are clearly two of the very best candidates for the Hall of Fame who will be eligible to appear on the Hall of Fame’s Expansion Era ballot in upcoming years. In fact, the duo (along with the deserving Bobby Grich) are head and shoulders above most of the others from that era.

Yet, we have some reason for worry: in recent years, the position players selected to be placed on the Expansion Era ballot have not ranked very high in WAR. Here are the five names to appear the last two times:

What do those players have in common, besides being essentially National League stars? They did well in batting average (Staub, Oliver, Parker, Garvey), accumulated a lot of RBIs (Staub, Oliver, Parker, Garvey), and won some league honors (Garvey and Parker were MVPs). Concepcion was a well-regarded defensive shortstop who benefited from playing on a popular team. Garvey had a lot of postseason success. Basically, these players were more “famous” than Sweet Lou and Tram ever were.

Compared to Hall of Famers from this era
Maybe the reason they’ve been overlooked by the writers is that Lou and Tram rest on the margin of the Hall of Fame? Well, based on the numbers they don’t. If we rate all second baseman of the expansion era, Whitaker comes in second, trailing only Hall of Famer Joe Morgan (100.3 WAR). Grich is third and then comes Hall of Famers Ryne Sandberg (67.5) and Roberto Alomar (66.8). For career value based on WAR, Sweet Lou outdistances two of the three Hall of Famers at his position in his era (going back more than forty years).

How does Trammell rate against contemporaries at shortstop? Not as good as Whitaker — he’s fifth in the expansion era. Trammell (70.4 WAR) trails Alex Rodriguez (118.9 WAR), Robin Yount (77.0), Ozzie Smith (76.5), and Derek Jeter (71.8). But there are some stipulations: ARod has played about half of his career games at positions other than shortstop, while Yount also played a large portion of his career as a center fielder. Of course ARod also had some help from foreign substances. Once you take this into consideration, and recognize that Trammell barely trails Jeter and Ozzie in career WAR (and outranks both in peak WAR), you see that Alan is a strong Hall of Fame candidate when compared to all shortstops from his era. Tram also ranks slightly ahead of the other Hall of Fame shortstop from the recent era (Barry Larkin with 70.2 WAR).

Clearly, neither Trammell nor Whitaker are marginal Hall of Fame candidates. They are both at the top among candidates for the Hall of Fame who are eligible to be considered by the Expansion Era committee in coming years.

Here’s hoping that the committee does a better job than the baseball writers did when it comes to two of the best middle infielders in baseball history.