Trammell and Whitaker’s absence in Cooperstown is a travesty 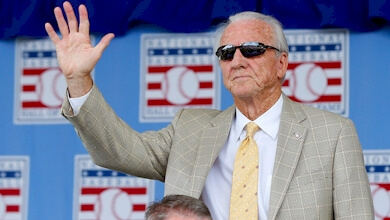 Al Kaline waves to fans in Cooperstown. His election in 1980 is the last time the baseball writers elected a Detroit Tiger to the Baseball Hall of Fame.

Seeing Al Kaline among all the great living Hall of Famers at the ceremonies in Cooperstown brought back memories of a long-ago road trip, an impulsive all-night driving adventure to get to Cooperstown just in time to see him inducted in 1980.

Little did I imagine then that Kaline would be the last Tiger player elected by the baseball writers until I reached a very old age, if then.

Before Kaline, the last Tiger put into Cooperstown in the “front door” by the writers was Hammerin’ Hank Greenberg in 1956. It now seems probable that the next Tiger player in the Hall will be Miguel Cabrera, and that won’t be until he’s sat out five years. So in seventy years, one Tiger elected to Cooperstown through the direct election by the writers.

I don’t have the stomach to count the number of Yankees inducted during that same period.

Do you know what the average career WAR (Wins Above Replacement)  is for a Hall of Fame position player? According to Baseball Reference, it’s 69.

Lou Whitaker’s lifetime WAR is 74.9. Whitaker was on the ballot for only one year and then removed because he failed to get even 5 percent of the vote from the writers. It’s one of the worst blunders in the history of Hall of Fame voting.

Since that snub of Whitaker, Frank Thomas, Roberto Alomar, and Ron Santo have been inducted into the Hall. Each of them have career WARs lower than Whitaker.

You read that right. That’s a total of fourteen of their contemporaries who are in Cooperstown with a lower WAR than Tram or Lou. In fact, in all there are 199 Hall of Fame position players whose career WAR is worse than Whitaker or Trammell.

Here’s another way to look at it. Who are the only players with a higher career WAR than Whitaker or Trammell who are not in Cooperstown? I count fourteen, according to the Baseball Reference calculation. Six have not yet appeared on the ballot—Alex Rodriguez, Albert Pujols, Adrian Beltre, Chipper Jones, Jim Thome, Derek Jeter. All are very likely to get into Cooperstown. (The “immortal” Jeter will get in on the first ballot and he has a 71.8 WAR, just above Tram but below Lou.) Four more are players currently on the ballot: Mike Mussina, Curt Schilling, Jeff Bagwell, and Larry Walker. One is Ken Griffey Jr, who will be eligible next year. And there is an overlooked nineteenth-century player, Tim McCormick; Rafael Palmeiro, who didn’t make the 5 percent cut because of suspected steroid usage; and Bobby Grich, who arguably is in the same overlooked category as Lou and Tram.

Yes, there are measures that might be more important than WAR. For instance, the average position player in Cooperstown has 2,400 hits. Lou and Tram were just shy of that. But so were Sandberg and Larkin. As were Carlton Fisk, Orlando Cepeda, and Kirky Puckett. About 170 Hall of Famers had fewer hits than Tram and Lou.

Was there ever a better, more durable double-play combination in baseball history then Whitaker and Trammell? Not in modern times. For two decades, they manned the middle of the diamond for the Tigers. And now, for two decades, they have been slighted.

If only they’d played in New York, or L.A., or Chicago, or Boston, or even St. Louis, no doubt Tram and Lou would have already been in the Hall for a long time and would have joined Kaline on the podium on Sunday along with the dozens of other Hall of Famers who attended this year’s ceremonies. As it is, their chances of getting in someday depend on the whims of the Veterans Committee, and that’s a crapshoot.

True, Tram still has one more year of eligibility on the Hall ballot. What do you think his chances are? Last year, Trammell got 25.1 percent of the vote, and that’s down from his peak of 36.8 percent in 2012.

In the 2015 voting, Bagwell got 55.7 percent of the vote in his sixth year of eligibility, Schilling got 39.8 percent in his eighth year on the ballot, and Mussina got 24.6 percent in just his second year on the ballot. And next year, Junior Griffey and Trevor Hoffman will be on the ballot for the first time. Mike Piazza and Tim Raines have already gotten close, and they remain on the ballot, knocking on the door. Tram is quite obviously not going to get voted in by the writers next winter.

You could also make a case for Jack Morris and Mickey Lolich as overlooked Tigers, though they are less clear-cut. But for me at least, this year’s Hall of Fame induction—and every year’s—are marred by the utterly ridiculous, completely inexplicable exclusion of Lou Whitaker and Alan Trammell.