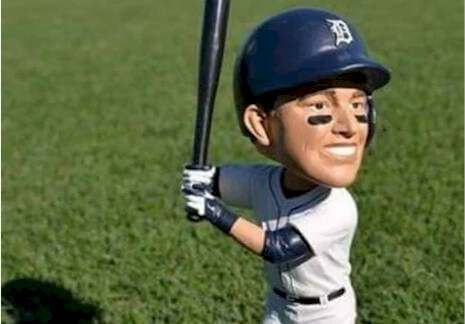 Fans at Comerica Park will have a chance at any of three bobbleheads of their favorite Detroit Tigers in 2017.

Have you always wanted to look like Daniel Norris? You’ll get a chance in 2017 if you are one of the first 8,000 fans at the September 24th game. That’s when the team and sponsor Aquafina will hand out knit caps with Norris-like beards to the first 8,000 who enter Comerica Park.

On Monday the Tigers announced their lineup of giveaways, and once again there’s a bevy of booty to be had.

Two current Tigers: Michael Fulmer and James McCann, will be featured on bobblehead dolls. Fulmer’s will be a special 2016 Rookie of the Year figurine, while McCann’s will have a removable catchers’ mask.

On August 19th, the first 10,000 fans will get a bobblehead of former Tiger star Alan Trammell.

Other giveaway items include the traditional magnet schedules, posters, calendars, and caps. In late August, kids can receive a back-to-school binder just in time for their return to the classroom.