With Trammell’s election, Tigers finally have a complete Hall of Fame lineup 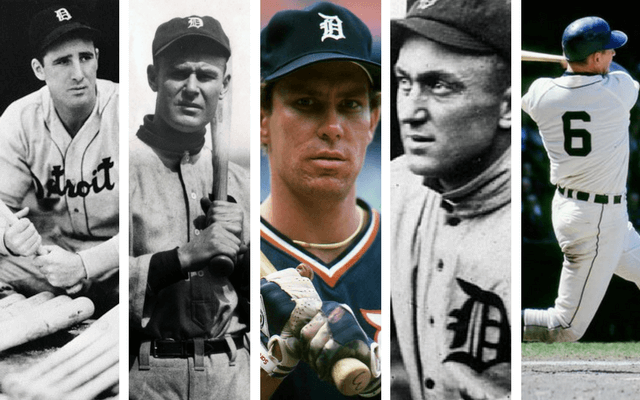 With the election of Morris and Trammell, both key members of the 1984 World Champions, there are now 21 former players who wore the uniform of the Detroit Tigers who have been elected to Cooperstown. That includes three outfielders who only had a brief cup of coffee with the club: Big Sam Thompson (played for Tigs briefly in 1906), Bucketfoot Al Simmons (1936), and Larry Doby (1959). Others played just a small portion of their Hall of Fame careers with Detroit, such as pitcher Waite Hoyt, outfielder Earl Averill, and third baseman Eddie Mathews, who earned a World Series ring as a small part of the 1968 World Champions.

The other 15 Tiger Hall of Famers now make a tidy team, covering every position on the diamond. With Trammell’s election, Detroit has their first Hall of Fame shortstop. Here’s a look at Detroit’s Hall of Fame lineup by position.

As late as 1969 (30+ years after his retirement), when Major League Baseball chose their 100th anniversary All-Time Team, Cochrane was tagged as the greatest catcher in history. Cochrane hit for a high average and he hit a lot of doubles. But his best trait was his leadership ability. Some people simply have that thing that makes them a great leader, and Mickey had it. In 1934 he was named catcher/manager by Detroit owner Frank Navin. In his first season, Cochrane guided the Tigers to the pennant. The following year they won the World Series. A near-fatal beaning nearly cost him his life, and Cochrane’s career was stopped short as a result.

Pudge was a similar offensive player to Cochrane, but an even better defensive catcher. He holds the career record for hits by a catcher and like Cochrane, Pudge was elected to the Hall by the writers.

Of all the great hitters who have worn the Old English D, Greenberg had the best raw power. One year he hit 58 home runs, another year he drove in more than 180 runs. Another year he hit 60 doubles. He came back from nearly four years away in World War II and hit a pennant-winning homer for the Tigers in 1945. He’s the only man to play on four Detroit pennant winners.

Imagine if Rod Carew could play second base like Roberto Alomar. That’s what Charlie Gehringer was sort of like. The quiet Detroit star could hit for a high average from the left side of the plate and he had great range and a strong arm at the keystone. Perennial All-Star, MVP, batting champion, and revered hero, Gehringer was one of the most popular players in the history of the team.

In Game Four of the 1984 World Series at Tiger Stadium, Trammell hit a pair of two-run homers to support Morris in Detroit’s 4-2 victory. That was the pinnacle of Trammell’s great career in which he spent 20 years with the club. Why has Trammell generally been underrated? Because he did everything very well rather than have one glaring strength. Instead of being a phenomenal acrobatic defender like Ozzie Smith, Trammell was a fundamentally sound shortstop who used positioning and an accurate arm. He was an excellent baserunner, a fine hitter, he had good power for a shortstop, and he had a good arm for most of his career. He could do it all well.

Most Tiger fans remember him as the TV voice of the Tigers for nearly four decades, but before that Kell had a fine career as one of baseball’s best third basemen. Kell’s best skill was as a defender, he was clearly the best third baseman of his time with the glove. There weren’t any Gold Gloves back then, but Kell received a lot of accolades. He was an All-Star ten times in the American League (five times as a Tiger) and finished in the top ten in MVP voting three times.

Few Hall of Famers are as connected as Manush and Goslin. Both were hard-hitting, high-average righthanded hitters in the 1920s. In 1928, Goslin beat Manush for the batting title on the final day of the season. A few years later, they were traded for each other, Manush going from the Browns to the Senators, and Goose the opposite way. Senators fans didn’t like the deal, and when they got Goose back a few years later they were thrilled after the Nats won the pennant with him back in left field. Manush was elected to the Hall in 1964, and one of the first things he did was advocate for Goslin, who was inducted four years later. They died three days apart in 1971.

For a long time, many experts considered Cobb to be the greatest player in baseball history. The Hall of Fame voters thought so: in 1936 when they voted for the first time, Cobb got 222 of 226 votes, more than anyone, including his rival Babe Ruth. The Georgia Peach spent 22 seasons in a Detroit uniform and when he retired he held the all-time records for runs scored, hits, and stolen bases. Those three records have been broken, but he still tops the all-time charts with a .367 career batting average, a mark that will almost certainly never be surpassed.

The three Hall of Fame Detroit rightfielders were great players, each with a unique style. Crawford played in the shadow of Cobb and was known for hitting triples. Heilmann replaced Crawford in the late 1910s and won four batting titles in the 1920s with a line drive bat from the right side of the plate. At the age of 20, Kaline won the batting title and began two decades as one of the greatest outfielders in American League history. Each rank among the best right fielders in baseball history, but Kaline’s combination of hitting and fielding skill place him ahead of the other two.

After he was elected by the Veterans Committee in 1996, Bunning was the only righthanded Tiger pitcher in the Hall of Fame until Morris was chosen this year. Bunning was a control specialist who threw from a three-quarter side arm delivery that looked like he was slinging the baseball toward home plate. He was an All-Star in five of his first seven full seasons with Detroit, but then the team traded him to the Phillies in a four-player deal.

Morris was the most polarizing candidate in Hall of Fame history (outside of Pete Rose). He spent 15 years on the ballot and inched very close to election only to miss out because of the ten-player limit rule. The veterans committee corrected a mistake and elected him a few weeks ago. Statheads hate it, but most traditional fans applaud his inclusion as the ace of the 1980s. His postseason accomplishments were impressive, and it’s hard to tell the story of baseball between 1980 and 1992 without Morris. The righthander won four World Series titles.

For a long time Newhouser got criticism for his record because some of his finest seasons came during the Second World War when many of the better players in baseball were away. But then folks realized that he was just as good in 1946 when the war players returned. He was elected in 1992 by the Veterans Committee almost two decades after falling off the BBWAA ballot. Like Trammell he topped out with about 40 percent support via the writers.