For two seasons, Pat Swilling was a menace on defense for the Lions 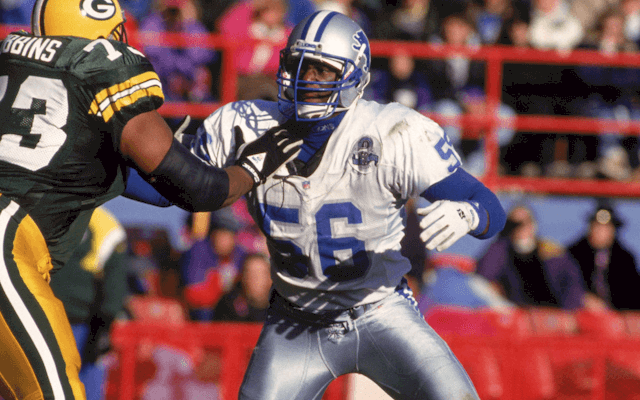 Outside linebacker Pat Swilling was named to the Pro Bowl in 1993 for the Detroit Lions.

Pat Swilling was one of the best pass rushers in NFL history. He used his quickness and strength to wreak havoc on opposing quarterbacks for a decade.

It started with the New Orleans Saints where Swilling was a five-time Pro Bowl selection and on a defense loaded with talent, was simply a sack machine.

The Detroit Lions saw this first hand in 1992 when Swilling sacked Rodney Peete twice, one of six Saints sacks in a 13-7 win for New Orleans over Detroit on Oct. 4, 1992, at the Silverdome. In the offseason, the Lions went out and got Swilling, the pass rusher that was something missing in Detroit. He left an impression in that head-to-head matchup.

The Lions had a stellar defense the previous season, led by Chris Spielman, Jerry Ball, Bennie Blades and Ray Crockett. But while those stars returned in 1992, the defense wasn’t quite as sharp and the Lions went from winning the division in 1991 to finishing 5-11 in 1992.

But the defense still had its stars and this was one of the games where everything came together. The Lions allowed one rushing touchdown to Vaughan Dunbar and two field goals by the great Morten Andersen.

That will win most games.

But the Saints defense was nothing short of spectacular that season. New Orleans finished 12-4 and made the playoffs behind a defense that allowed just 12.6 points per game, the lowest allowed in the NFL.

The Saints allowed just 36 yards rushing to Barry Sanders and only allowed a Peete touchdown pass to Brett Perriman.

Swilling was the right outside linebacker on one of the best linebacking corps in NFL history that year. Playing a 3-4 defense (four linebackers and three down linemen), Swilling, Rickey Jackson, Sam Mills and Vaughan Johnson all made the Pro Bowl that season and Swilling was a first-team All-Pro with 10.5 sacks that season.

Three of the four (for some reason Jackson was left off) were Pro Bowlers the year before, too, which was Swilling’s banner season. He had an astounding 17 sacks and 60 tackles. With a dominant linebacker foursome, it is hard to believe one of them could have a season with 17 sacks. Everyone was focused on Swilling, but nobody could stop him.

The Lions wanted that kind of pass rush, something they really were lacking, even when the defense was good.

On the 1993 Lions, Swilling didn’t even approach 17 sacks. Everyone was focused on him, and with the Lions, he didn’t have Hall of Famer Rickey Jackson on the other side of the line to be dealt with. Swilling finished with 6.5 sacks, his lowest total in any full season after seven years in New Orleans.

But Swilling was still selected for his fifth consecutive Pro Bowl because of what he did around the ball. He went from a sack machine to a turnover machine. Swilling had three interceptions in 1993 and forced five fumbles, recovering one.

It wasn’t the exact impact the Lions were expecting, but it was a huge impact — just for that season. In 1994, Swilling only started seven of the 16 games he played in and had 3.5 sacks. He was let go by Detroit and ended up with the Raiders, where he started every game for the next two seasons and finished with 13 sacks in his first year in Oakland.

Swilling finished his career with 107.5 sacks, still 24th on the all-time NFL leaderboard, with 10 coming in his two seasons in Detroit. His career in the Silverdome was as quick as his first move toward the quarterback, but in Detroit, Swilling proved he was a complete player, not just a dominant pass rusher.