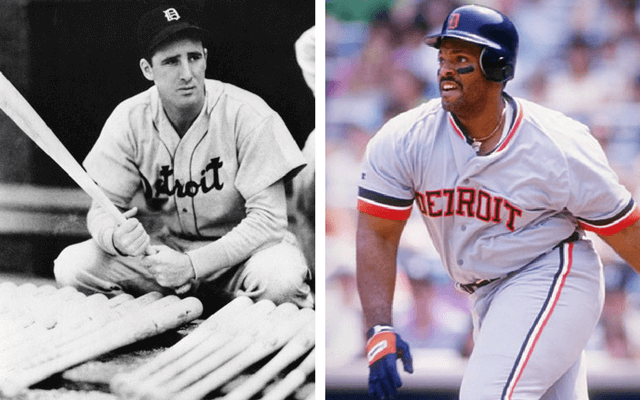 Hank Greenberg and Cecil Fielder are the only Tigers to hit 50 homers in a season.

There has been plenty of debate about what the “real” single-season home run record is.

The first three had the cloud of performance-enhancing drugs, while Maris broke Ruth’s record in a longer season.

Giancarlo Stanton fell just short of 60 home runs in 2017 and has publicly stated that he believes Maris holds the record. Of course, Major League Baseball lists them all in the record books with Bonds still officially holding the record.

Stanton had a monster season and gave chase to an exclusive club, finishing the year with 59 home runs. Two Detroit Tigers had similar charges toward the home run record, though they would also ultimately fall short.

In 1930s, the Tigers had their first dominating slugger since the Deadball Era ended with Hank Greenberg. The slugging first baseman and outfielder was the centerpiece in a superb Detroit lineup that won pennants in 1934 and 1935 and later in 1940 and 1945.

His best season actually didn’t come in any of those seasons, however. Greenberg’s best year was 1938, at the peak of his power. He was a seasoned veteran and still had several years before entering World War II.

In the 1938 season, Greenberg slugged 58 home runs to lead the American League. He also led the AL in runs with 143 and walks with 119.  “Hammerin’ Hank” drove in 147 runs and batted .315. His walk total raised some questions about whether the Jewish slugger was intentionally not pitched to down the stretch because of anti-Semitism.

Greenberg himself debunked that theory. After slugging his 58th home run of the season, there were five games remaining in the Tiger season and he walked just four times in those five games, near the same rate he was walked all season.

In the final five games, Greenberg went 5-for-18 at the plate and was not able to reach Ruth’s then-record of 60. His 58 was tied with contemporary Jimmie Foxx for the right-handed single-season record until McGwire and Sosa broke those marks in 1998.

It was one of the most exciting Septembers in Detroit Tigers history however as fans packed into Briggs Stadium to watch Greenberg. The Detroit newspapers were glued to the coverage of Greenberg’s chase. It spread across the country as Ruth was still alive and just three years removed from his illustrious career.

Detroit has seen plenty of exciting finishes in pennant races, plus special seasons like Denny McLain going for 30 wins and Mark Fidrych’s electrifying rookie season. But there hasn’t been anything quite like Greenberg’s chase of Ruth’s record, a mark that was still seen as likely unbreakable.

The closest the Tigers had to that chase was the slugging 1990 season for Cecil Fielder.

Fielder, a first baseman, coming back from playing in Japan after starting his career with the Toronto Blue Jays, took Major League Baseball by storm in 1990, coming out of nowhere to slug 51 home runs.

His total of 51 doesn’t seem that crazy to those who watched baseball from the mid-90s to the present, but in 1990, no one had reached 50 home runs since Cincinnati Reds outfielder George Foster slammed 52 in 1977. It was the longest drought of 50-home run seasons in major league history.

Fielder wasn’t quite chasing the home run record but he was chasing 50, trying to become the first Tiger since Greenberg to reach the mark. Coming into the final day of the season, he was one short and slammed two to finish with 51.

In seven seasons with the Tigers, “Big Daddy” slugged 245 home runs, but there was no season more exciting than his very first in Detroit, where he stunned the baseball world with his slugging prowess and ushered in a decade of power hitting.