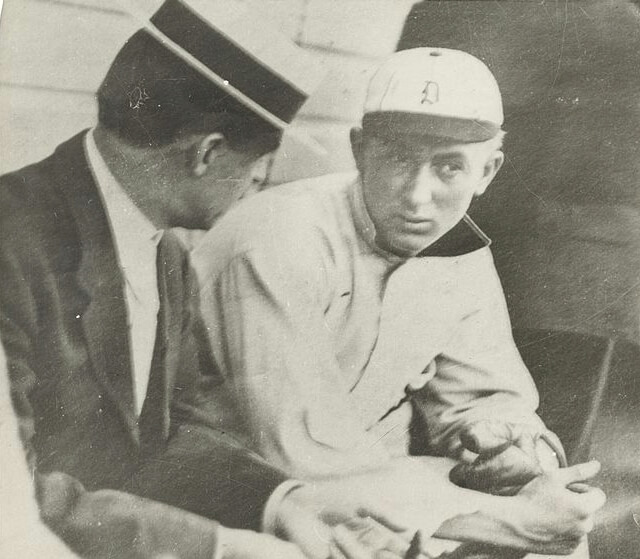 As impressive as his first game in the major leagues was, the fact that Ty Cobb was in a northern city on a team with new teammates and an unfamiliar manager, was nearly as impressive to the wide-eyed Georgian teenager.

Bill Armour was in his first season as manager of the Tigers in 1905. He was a small, conservative man, who had never played professional baseball, and managed in a suit and tie, which was not uncommon in those days. Armour was four days shy of his 36th birthday, making him twice the age of his new outfielder. The Detroit manager was known for his trademark straw hat and his easygoing manner. Critics complained that Armour was easily manipulated by his players, others simply called him “gentlemanly.”

On the morning of Cobb’s first game, Armour sat with the rookie and went over the details of his contract, which called for a salary of $1,500 for the year. Since he was reporting at the end of August, Cobb would earn about $250. After Cobb penned his name to the contract, he changed into the heavy flannel uniform of the Detroit Tigers, which were white (almost cream), trimmed in navy blue, and featured an Old English “D” on the left breast. The team cap was white with a navy blue bill and stripes draping down from the button at the top, with the familiar Old English “D” on the front, also in navy.

The park where Cobb played his first major league game was the largest he’d ever seen, with a capacity of nearly 9,000, and grandstands wrapping around both the first and third base lines reaching nearly to the foul poles. There were no seats in the outfield, though at times temporary seating areas would be erected by zealous entrepreneurs hoping to make a buck. They called them “wildcat bleachers.”

The league that Ty was entering was faster, and featured men who were bigger, stronger, and more-skilled than Cobb had ever witnessed. Whereas in the minor leagues Cobb was one of the fastest players on the field, in the major leagues nearly every player was quick. Speed was paramount in the game of baseball in 1905. Baseball games were decided by pitching and defense. Runs were scarce. Teams fought to advance their runners from base to base, clawing to push a man across the plate. That season the average American League team scored three-and-a-half runs per game, and pitchers posted a stingy 2.65 ERA. Teams relied on offensive pressure to force the defenders to make mistakes, which they did – clubs averaged nearly two errors per game.

The next youngest player on the Detroit club was Charley O’Leary, the shortstop, who was in his second full major league campaign and four years older than Ty. With these stark contrasts between Cobb and the rest of the Detroit club, Ty stood out among his teammates from the start. Some of his habits on the field caught their attention, as well.

Since his days with the Royston Reds, Cobb had taken to swinging three bats while he waited on deck. Each time he approached the plate he discarded two of the bats and carried one piece of lumber, which subsequently felt lighter in his hands. His Tiger teammates had never seen anyone do this, and some of them took it as a cocky maneuver by Cobb. It was inevitable that the youngster would make enemies.

Left fielder Matty McIntyre disliked Ty from the very beginning, and the three-bat habit cemented his distrust of the fresh rookie from Georgia. On September 5, in the second game of a doubleheader against the Chicago White Sox in Detroit, a play in the outfield illustrated McIntyre’s disdain for Cobb. Sox shortstop George Davis lofted a short fly to left-center field that McIntyre trotted in to catch. But Cobb, anxious to get to every ball he could, darted in from center field and caught the ball. Had regular center fielder Duff Cooley (who was injured and out for the remainder of the season) made that play, McIntyre wouldn’t have flinched. But since it was Cobb who did it, McIntyre responded by chastising the rookie in the outfield, and continued the barrage on the bench after the inning, embarrassing Ty.

Notwithstanding McIntyre, Cobb did make friendships on the team, though they were few. Veteran players were generally distrustful of rookies, whom they saw as threats to their livelihood. But 39-year old Bobby Lowe, in his 16th season in the big leagues, helped Cobb and even invited Ty to dine with him and his wife. Lowe played sparingly, but he used his years of experience to help guide Cobb and other young players in his time with the Tigers.

The other Tiger who made an effort to befriend Cobb in his rookie season was pitcher Bill Donovan. Donovan, who earned the nickname “Wild Bill” more for the erratic control of his fastball than his lifestyle, was a bit of a loner, but immensely popular with the Detroit partisans. In Cobb’s rookie season, Donovan often dined with him, and he even assisted in finding long-term housing got his teammate. The favors would not go unnoticed: Cobb and Donovan remained good friends until Wild Bill was tragically killed in a train accident in 1923.