When Ty Cobb and Thomas Edison met in spring training 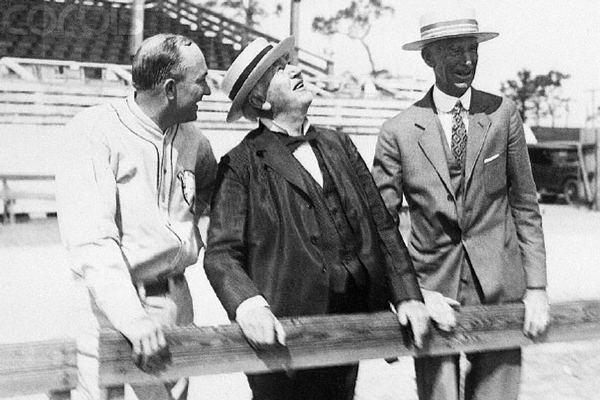 In 1927, in the twilight of his great baseball career, Ty Cobb was one of the most famous athletes in the country and already on his way to becoming a millionaire. But when he came together in a spring summit in Florida with a grey-haired man in a straw hat, Cobb was the second-most famous man in the movie reels and photos taken that day by a throng of reporters.

The “other man” was the most iconic titan of technology of that era, a man who had changed the world (and brightened it) with his inventions. By the time of his meeting with the great baseball legend, Thomas Edison was 80 years old and had produced an incredible slew of gadgets and devices that made him rich, famous, and one of the most influential and powerful men in the world. The electric light, motion pictures, and sound recorder were among his greatest innovations, which tallied more than 1,000 patents. Some of his inventions even seemed to be designed with Cobb in mind.

Edison had perfected and patented the first stock ticker, and of course Cobb owned thousands of shares in General Motors and Coca-Cola by this time. Edison’s philosophy also echoed Cobb’s tenacious drive to be the greatest.

“Our greatest weakness lies in giving up. The most certain way to succeed is always to try just one more time,” Edison wrote.

After 22 years in a Detroit uniform, Cobb was embarking on his first season with the Athletics in 1927. The team made its spring home near Fort Meyers, not far from Edison’s winter laboratory. The octogenarian was still putting in his famous long hours tinkering and perfecting his inventions. But his visit to the A’s training camp was not to share schematics, it was a chance to meet baseball’s greatest hitter in his laboratory. With 12 batting titles and a record number of hits, runs scored, stolen bases, and runs batted in, Cobb was as legendary in his profession as “The Wizard of Menlo Park” was in his.

The series of photos taken at the A’s spring facility were well staged to show Cobb, Edison, and Philadelphia manager Connie Mack (donning his trademark straw hat) chatting at the ballpark. It’s likely that Edison and the photographers were on hand early in the morning before the rest of the A’s team had reported for the day. A news item in the Trenton Independent mentioned the event.

“The great man of light and electricity discussed the physics of bat and ball with Ty Cobb, the new batting star in camp with the Philadelphia ballclub.”

A film crew was there to use the very technology that Edison had perfected, capturing Cobb, Edison, and Mack pointing out something (maybe an airplane?) in the skies above the ballpark, and also several moments of the three famous men talking. Later, Mack donned a catchers’ mitt (his former position during his playing days) while Cobb tossed a few pitches to Edison. The great inventor apparently didn’t make much contact, if the surviving film is evidence.

You could hardly blame Ol’ Tom for his poor hitting: Edison was occupied at that time of his career with his work on rubber. After World War I, the country had realized it was critical to have access to rubber to build an army. Edison spent his final years researching methods for growing and producing rubber domestically. He died in 1931 in New Jersey.

In 1927, the 40-year old Cobb was rejuvenated with the A’s under Mack. Freed from his role as a player/manager, which he’d done in Detroit for six years, The Georgia Peach played in 133 games, his most in three seasons, hitting .357 with 104 runs scored, 32 doubles, seven triples, five homers, 93 RBIs, and 22 stolen bases to extend his major league record. He played one more season for the A’s and hit over .300 for the 23rd consecutive season. 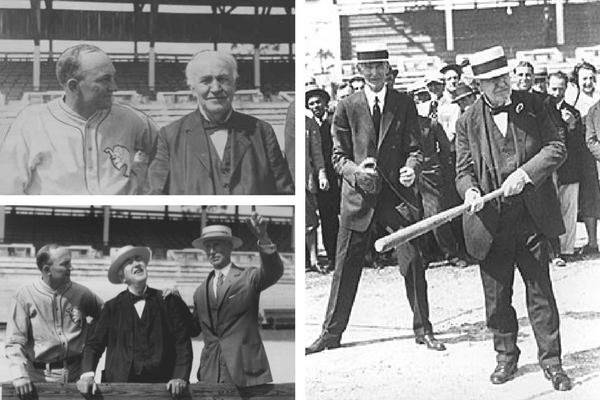