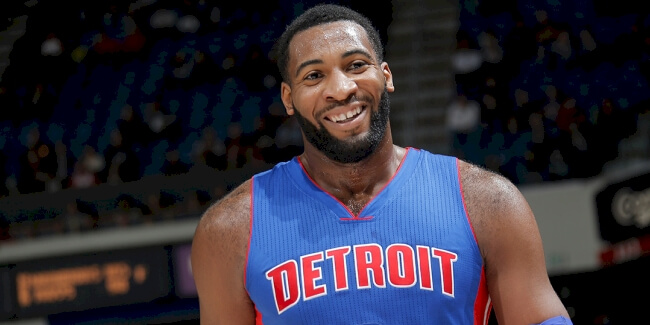 On Monday Andre Drummond celebrated his 22nd birthday as he readies himself for his fourth season in the National Basketball Association. He’s no longer a big teenager.

Can the talented Detroit Pistons center become a dominant center like Dwight Howard was during the five years he played under Stan Van Gundy in Orlando?

For starters, Howard, now a member of the Houston Rockets, won three straight Defensive Player of the Year awards while with the then-Stan Van Gundy-led Orlando Magic.

Howard has also never posted a higher rebounds per game average than he did in his final season with Van Gundy, when he posted 14.5 boards a game.

Howard posted that career-high total while playing in 54 games of the lockout-shortened 66-game 2011-12 regular season, and has not recorded 12.5 rebounds or more per game since he left Orlando and Van Gundy’s side.

I think it’s fair to say that Van Gundy left a giant impact on Howard’s career, although “D-12” might not admit it since he’s rumored to have forced Van Gundy, the coach with the highest winning percentage in Magic franchise history, out of town.

Now, the hope is that Van Gundy can have the same impact on Drummond in SVG’s second year roaming the sidelines at The Palace of Auburn Hills.

Howard did not put together such a season until Van Gundy came on board in Howard’s fourth year in the Association, when he grabbed 14.2 boards per game.

Drummond has also been a dominant rebounder when it comes to his per 36 minute average for rebounds, which has increased every season since his rookie campaign of 2012-13.

In fact, Drummond’s per 36 minute total was north of 14 in both his sophomore and junior campaigns as a pro.

It’s telling of how far the 21-year-old Drummond, who turns 22 on August 10, has already come, and how far the 6-foot-10 former University of Connecticut center can continue to if molded properly by Van Gundy.

Drummond has been a rebounding machine in his three years as a Piston. Now, it’s time for him to become an elite rim protector and more of an offensive presence.

Defensively, he has been solid, as his blocks per game mark during the 2014-15 campaign sat at the same number as Howard’s did as a third-year pro (1.9 BPG).

While his block and rebound totals have progressed, his field goal percentage declined from nearly 62.5 percent in his second year to below 55 percent in his third year.

In contrast, Howard’s FG percentage rose to 60 percent for the first time in his third year with the Magic, and his points per game total rose to 17.6.

It signifies to me that Drummond is capable of taking a big leap in points per game this upcoming season from nearly 14 a game to around 17, especially as a result of Greg Monroe leaving for the Milwaukee Bucks this offseason via free agency and being replaced by floor-stretching power forward Ersan Ilyasova.

With the loss of Monroe and without Josh Smith now for a full season, the interior will be less clogged, allowing Drummond to assert himself more offensively. It’s why Drummond should easily increase his amount of field goal attempts to at least 12 per game in Van Gundy’s second season in Motown.

Additionally, as a result of Reggie Jackson being on board for a full season along with Brandon Jennings — once he returns from the ruptured left Achilles tendon he suffered in January — and 2015 first round draft pick Stanley Johnson, the Pistons should be able to take the next step as a team.

With a better team, it means more attention for the Pistons’ star players, such as Drummond. And with added attention, Drummond should be in line for his first All-Star Game appearance.

The All-Star nod is not a given, however, as Drummond needs to increase his nightly point total and continue to crash the boards on a consistent basis.

Don’t worry about whether or not it will happen, though.

With the increased amount of space Drummond will have to roam freely around the rim and a year under his belt in Van Gundy’s system, which emphasizes the usage of a dominant big man, the man they call the “Big Penguin” will be able to display consistent two-way dominance and All-Star form for the first time in his NBA career.