Verlander joining small list of pitchers to do these two things 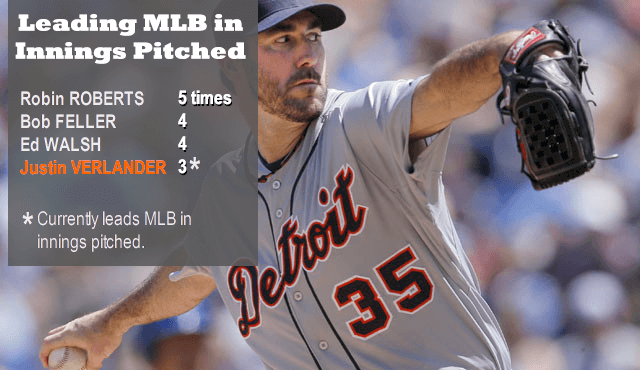 Justin Verlander is on pace to lead Major League Baseball in innings pitched for a fourth time, something only three other pitchers have done since 1901.

Justin Verlander has enjoyed a tremendous comeback season. After an injury-filled 2015 and countless questions about whether or not he could ever become the elite pitcher he once was, 2016 has answered those questions.

Verlander has returned to the top handful of pitchers in the American League and is quietly climbing up the all-time ranks in a couple of major categories.

Already this season, he has won 14 games for the eighth time and recorded his 2,000th career strikeout.

Currently, he leads the AL in strikeouts and is within striking distance of the major league lead in innings pitched.

If he can reach those milestones, he will move into an even more intimate circle than the one he occupies.

As far as Tigers go, he has led the majors in innings pitched three times. If he reaches the mark a fourth time, he will be one short of all other Tiger pitchers combined. Jack Morris, Mickey Lolich, Denny McLain, Hal Newhouser and Dizzy Trout each have led the majors once in innings pitched. Pacing all of baseball in innings is a sign of durability and dependability. No other pitcher over the last eleven seasons has been as reliable as Detroit’s JV.

In strikeouts, Verlander has led the majors three times, one behind all other Tigers combined. Newhouser led the majors twice, while Lolich and Virgil “Fire” Trucks each accomplished the feat once.

Most Tiger fans realize the place Verlander holds when it comes to Detroit Tigers history.

But he is rising on baseball’s all-time lists, too.

If Verlander becomes the MLB leader in innings pitched for a fourth time (there have been 102 different MLB leaders in history), he will be second on the all-time list, only behind Hall of Famer Robin Roberts, who did it five times, and tied with Hall of Famers Bob Feller and Ed Walsh (since 1901).

Verlander is the AL strikeout leader, but it looks unlikely for him to overtake the MLB lead in that category. But if he somehow did, or led the MLB next year, or any year down the road, he would be tied for eighth with four seasons (with Hall of Famer Sandy Koufax, Lefty Grove, and Dizzy Dean), trailing only HOFers Randy Johnson (9), Walter Johnson (7), Bob Feller (7), Nolan Ryan (7), Amos Rusie (5), Rube Waddell (five) and Dazzy Vance (5).

If you are looking closely at both lists, you will realize that only Bob Feller and Verlander would be on both lists, which is stunning. If you’re a pitcher and you find yourself in a small group with Bob Feller, that’s pretty damn good. (Rapid Robert and Must-See JV share something else in common: each has multiple no-hit games, Feller with three and Verlander with a pair).

Even where Verlander is right now, having led MLB in strikeouts and innings three times, he is joined only by Feller, Grover Cleveland Alexander and Warren Spahn – three legendary pitchers – on that list. All have plaques in Cooperstown, by the way.

These aren’t the most important lists to be on, but the fact that he is on both with only Feller, Alexander and Spahn is truly impressive.

The past two years, there have been plenty of questions about Verlander’s chance for the Hall of Fame, mostly involving it looking bleak.

But this year, Verlander proved to be back at the top of the league in his two remarkable categories, and it has re-entered him into the Hall of Fame discussion.