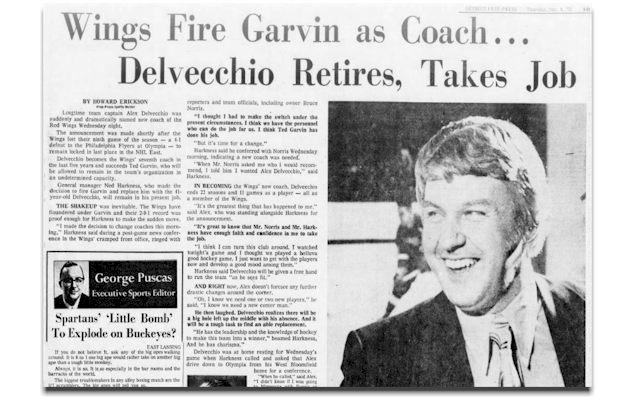 The November 8, 1973 issue of the Detroit Free Press announces the hiring of Alex Delvecchio.

November 7
The Red Wings name former star Alex Delvecchio as their new head coach on November 7, 1973. Delvecchio will lead the team for four seasons but fail to guide them to the playoffs.

On November 7, 1922, Sam Thompson, one of the great Detroit ballplayers from the 19th century, dies in Detroit at the age of 62. Thompson was a big slugger for the Detroit Wolverines in the 1880s, helping them to the pennant in 1887 when he won a batting title. At the time of his death, Thompson was serving as a court official in Detroit when he suffered a heart attack. He was posthumously elected to the Baseball Hall of Fame in 1974.

November 9
On November 9, 2009, Steve Yzerman is inducted into the Hockey Hall of Fame in Toronto. He is joined with fellow inductees and former Red Wings’ teammates, Brett Hull and Luc Robitaille.

November 10
On November 10, 2006, the Tigers acquire Gary Sheffield from the Yankees in a trade in which they send three prospects to New York. The veteran righthanded slugger spends two years with the Tigers, hitting 44 home runs primarily as their designated hitter.

On November 10, 1991, the Detroit Red Wings retire Alex Delvecchio’s uniform number 10, lifting it to the rafters at Joe Louis Arena. Delvecchio spent 24 years with Detroit as a player, was their coach, and had two stints as team general manager.

On November 10, 1948, the Tigers make one of their worst trades, sending 22-year old pitcher Billy Pierce to the White Sox for 33-year old veteran catcher Aaron Robinson. Detroit hoped Robinson would solidify the backstop position for them, but after a solid season in 1949, he slumped to .226 in 1950 and was sent packing in three years. Pierce went on to win 208 more games, making the All-Star team seven times in 13 years with Chicago.

November 13
On November 13, 1994, Barry Sanders has the biggest rushing game of his career in the Lions 14-9 victory over the Buccaneers in Detroit. Sanders rushes for 237 yards on 26 carries for a 9.1 average. Despite his career day, Sanders fails to find the end zone.