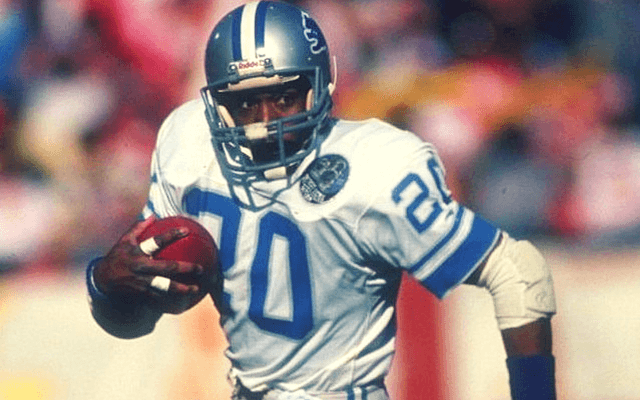 Running back Billy Sims was the first selection in the 1980 NFL Draft by the Detroit Lions.

The jersey was sparkling new, featuring the Detroit Lions’ Honolulu blue and silver. It had a number 20 on the back, below the name “Sims” in bright white letters.

It was packed in a suitcase, bound for LaGuardia Airport. And Tom Lesnau, a member of the Lions’ front office staff, was entrusted with the task of accompanying it along the way.

Once in New York, Lesnau would take the uniform to the Grand Ballroom of the Park Central Hotel (known then as the New York Sheraton Hotel), where the National Football League was preparing to hold its 1980 draft.

The Lions, by virtue of their putrid 2-14 record the previous year, had the number one pick. Everyone knew they wanted to draft Billy Sims, the 25-year-old running back out of the University of Oklahoma. Once that happened, the Heisman-Trophy-winning Sims would don that number 20 jersey that Lesnau was carrying so lovingly. The flash bulbs would click, everyone would smile, and a new era of Motor City football would commence.

Whether the Lions would be able to sign him to a contract…well, that remained to be seen.

On April 28, the night before the draft, at an undisclosed hotel near Detroit Metro Airport, Lions’ General Manager Russ Thomas met for nearly three hours with Sims and his business manager, Jerry Argovitz (a part-time dentist). They were not there for a cavity filling. At issue were contract terms for Sims, which were proving to be very elusive. In the end, an accord was not reached, leaving Sims’ future as a Detroit Lion very much up in the air.

Before parting, an annoyed Argovitz put it bluntly to Thomas: “Do not draft (Sims) unless you’re willing to pay the numbers we talked about today.” While he and Sims boarded a plane to New York a short time later, reporters asked Argovitz his thoughts. “It don’t look good. The Lions are losing ground. They don’t want Billy Sims. They’re offering him monies that are ridiculous.”

He added a final zing: “And just because some other agents signed a ridiculous contract for their players and they (the Lions) want to base the figures on those contracts, I refuse to do that.”

There were rumors that Detroit would draft Sims, and trade him immediately after. But that was all speculation.

As for Argovitz, he wasn’t saying what his counteroffer had been. But considering he came to the table seeking a $4.5 million contract for his client, it didn’t take an Einstein to figure out that the two parties were worlds apart.

Sims insisted he wanted to play in Detroit, that he wasn’t trying to cop a bad attitude from the start.

It was a dicey situation for the Lions, who didn’t want to have happen to them what had happened to the Buffalo Bills just the year before. That team had drafted Tom Cousineau number one, only to lose him.

Despite the uncertainty, the Lions had scheduled an afternoon press conference at the Silverdome the day of the draft. The hope was that they would be introducing Sims as the newest member of the Lions. Of course, Sims and Argovitz were invited. “But I’m not going,” Argovitz blurted to reporters, “and neither is Billy.”

For months, the Lions had been drooling at the prospect of Sims playing in Pontiac. Head coach Monte Clark and his top aide, Tim Rooney, envisioned Sims as the next Walter Payton or Earl Campbell.

Back in 1980, the NFL draft was not yet the round-the-clock, in-your-face media blitz that it is today. The Park Central Hotel had a long list of distinguished former residents, among them Mae West, Jackie Gleason, and Eleanor Roosevelt. This was the first year it was hosting the NFL draft, and it was a relatively subdued affair, attended mostly by front office personnel.

It was not even broadcast on television. Instead, the Detroit Free Press provided updates on the opening rounds. In order to get those updates, however, fans had to pick up their rotary phones and dial a number. In turn, Michigan Bell’s “Sportsphone” would hook up the caller directly with New York.

The draft officially got underway at 10:00 a.m. on Tuesday, April 29. National Football League Commissioner Pete Rozelle took the podium at the Grand Ballroom, ready to announce the Lions’ pick. But there was a delay. Lesnau, sitting near Rozelle, was on the phone with Coach Clark, waiting for the final approval to go with Sims. After a wait of about 3½ minutes, Lesnau finally delivered the verdict.

With the number one pick in the 1980 draft, the Detroit Lions selected Billy Sims. As per custom, the ballroom crowd erupted in cheers and applause.

Moments later, Sims was accosted by reporters. Would he sign with Lions? Would he wear the Honolulu blue and silver? Would he resurrect a franchise that had become the laughingstock of the league?

Argovitz, however, put a damper on the good vibes by urging Sims not to pose with the new “20” jersey. Sims took the advice, and did not hold it up. Back in Pontiac, however, Monte Clark held aloft a hand-made sign to the press, reading simply “We’ve Got Sims.”

Ultimately, Sims and Argovitz did fly back to Detroit in time for the afternoon’s presser, but the atmosphere in the Silverdome was noticeably chilly. The Lions had their man, but could they keep him? If not…well, there was always Dexter Bussey, right?

For the next 5½ weeks, football fans in Detroit had to read about the constant back-and-forth between Sims and the Lions. Sims was rumored to be ready to bolt to the Canadian Football League, until his asking price proved too exorbitant. Finally, on June 10, he signed with Detroit. Russ Thomas insisted the terms remain confidential, but speculation was that they were somewhere in the neighborhood of $2 million over four years.

At the press conference announcing the deal, a dapper Sims wore a crisp, white suit with a small gold replica of a dollar bill hanging from his neck. “It is a good-paying job,” he beamed.

Argovitz, in his trademark cowboy hat, mugged for photographers and called the contract “the best any first-year player in this league has ever signed…I wouldn’t trade his contract for anybody’s in the league.”

It had taken a while, but Sims was officially a Detroit Lion.