What’s in a name? Some Detroit sports arenas might need a new identity 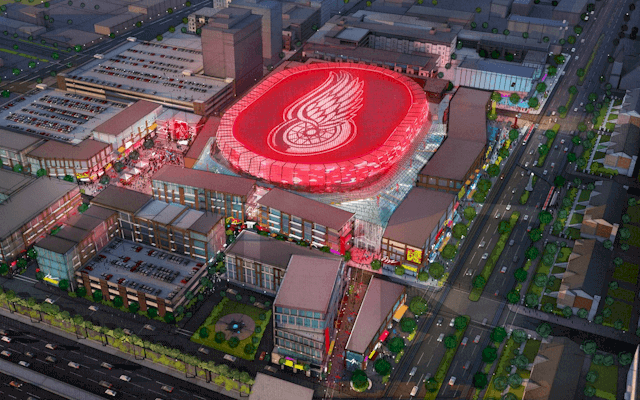 An artistic rendering of the new Red Wings’ home, to be named Little Caesar’s Arena.

There were more than a few scattered complaints when it was announced that the new home of the Detroit Red Wings being built in Midtown will be named Little Caesar’s Arena.

I’m not sure why anybody is surprised at this. Mike Ilitch owns the Wings, and he owns Little Caesar’s. Anyone could have seen this coming a mile away. And corporate sponsorship is the way things work these days.

Little Caesar’s Arena doesn’t exactly roll off the tongue, however. And to just call it “Little Caesar’s” will always be a bit awkward. (“The Wings took on the Columbus Blue Jackets tonight down at Little Caesar’s…”) I think a nickname for the new arena will eventually have to take hold. People will no doubt come up with all variety of pizza-based puns that only induce eyeball rolling.

Little Caesar’s Arena, however, is not any worse than Comerica Park, which I’ve always felt was a boring and uninspired name. People tried to refer to it as the CoPa early on. But all this did was to get a certain annoying Barry Manilow song stuck in everybody’s heads whenever they heard the nickname.

With all its improvements in the past 17 years, Comerica Park is a much, much better place to visit than it was when it first opened. But the dull name remains, and we’re stuck with it.

Ford Field, on the other hand, is appropriate enough, as long as the Ford family owns the team. Ford has built its reputation on building tough, hard-working pickup trucks, which is also apt for an NFL stadium. Chevy Field or Chrysler Stadium would be more evocative of family sedans, and just wouldn’t have the same ring to it.

The Palace, I’m convinced, is one of the best names for a stadium or arena ever, period. It sounds regal. It oozes class, even when the team that plays in it does not. Kudos to the Palace Entertainment Group for never giving in to the desire to sell the naming rights all those years. Now, if only the Palace were downtown…

Joe Louis Arena, architecturally speaking, will not be missed, but I think the name itself will. It is very Detroit, and it honors one of the city’s most graceful champions.

Detroit’s long-gone sporting venues also had some great-sounding names. Olympia Stadium made it sound as if the very gods skated on its ice.

What would you name the Detroit sports venues?

But imagine you were given the task of re-naming Comerica Park, Little Caesar’s Arena, The Palace, and Ford Field.

And imagine each one had to honor the name of a former great player, coach or manager.

Your answers don’t necessarily have to boil down to the greatest players or coaches in the history of the Tigers, Red Wings, Pistons or Lions. The validity of Al Kaline Park, or Ty Cobb Corners cannot be argued. But Willie Horton Stadium, for example, might be a very appropriate and worthy new name for Comerica Park, even though Horton was by no means the greatest ever to wear the Old English “D.” But his actions off the field, and his love for his city, are as important as anything he ever did in a game. And, of course, he could hit the ball a mile…

Gordie Howe Arena is a near-perfect name, and hearkens back to the glory days of hockey in Detroit. But what about Yzerman Arena? There is no shortage of other potential names to choose from here. Heck, you may even like the sound of Mickey Redmond Arena.

As for The Palace of Auburn Hills, why not re-name it Vinnie’s Palace? That way we can retain that kingly sound. How about Chuck Daly Center? Laimbeer Garden would be neat, because everybody in Detroit would love the name, and the rest of the country would hate it, just like it does Bill Laimbeer.

Trying to re-name the Lions’ stadium can become a difficult quagmire, given the dearth of truly great players. Bobby Lane Park? Mel Farr Field? I’m not sure every Lion fan would feel comfortable naming the place after Barry Sanders. This one is the toughest of the four.

So who would you pick? In a world without corporate sponsorship, what four immortals should we name our four pro sports venues after? Tell us in comments below or on our Facebook page.