When the wheels fell off the Red Wings in the 1970s

Garry Unger was traded away in the early 1970s by the Red Wings because he refused to cut his hair.

When I was a kid growing up in Michigan I couldn’t understand what all the fuss was about the Detroit Red Wings. First, I didn’t own a pair of ice skates and mine was a baseball family, so we were centered on the Tigers, not the hockey rink. But mostly I was confused because when I was a young boy the Red Wings were a bad team. They never made the playoffs.

I know now it was unusual.

If you charted the history of the Red Wings, giving high marks for playoff appearances and trips to the Stanley Cup Finals, and low marks for bad regular season records and non-playoff seasons, you’d see something like this: 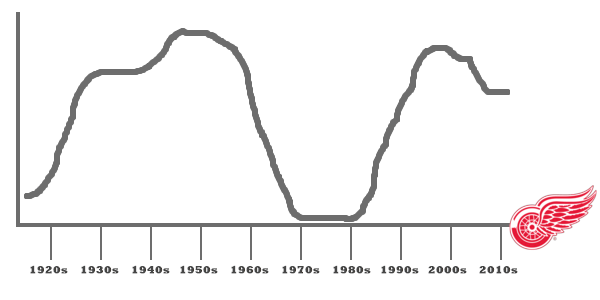 Notice anything strange there? The Wings went into a deep funk in the 1970s, about the time I was learning how to tie my shoes, read, and disco.

The Red Wings have won eleven Stanley Cup titles, advanced to the Finals 24 times, and made the playoffs in 63 of their 89 seasons, including the last 24 in a row. They are one of the NHL’s greatest franchises, indeed one of the most successful in all of sports. But for 17 seasons (which happen to coincide with the first 16 years of my life), the Wings made the playoffs only once. What happened?

In September of 1971 when he would typically be preparing for the upcoming season, Gordie Howe called it quits after 25 years with the Red Wings.

“He has probably been the single greatest influence in converting this game into a North American game,” NHL President Clarence Campbell said at the announcement in Detroit. Gordie admitted he was “nervous as hell” as he prepared to speak to the assembled media and officials. But nerves or not, Gordie was done, or at least we thought so. He was done in Detroit, but he did come back to skate in the World Hockey Association and actually played until he was 52 and a grandfather.

The Wings missed his leadership of course, but it wasn’t just the loss of Gordie that sunk the Wings in the 1970s.

Age caught up with their core

In the 1970-71 season the wings best defenseman, Gary Bergman, was 32 years old. And that was young compared to two of the best goal scorers on the roster: 42-year old Howe and 38-year old center Alex Delvecchio. There may have been some hope: their high scorer was a youngster named Tom Webster. But within weeks after Howe’s retirement, the Wings traded peachfuzzed Webster to a team called the California Golden Seals. Webster played well elsewhere, while the player Detorit got for him (defender Ron Stackhouse) was just ho-hum average.

Frank Mahovlich, Billy Dea, Red Berenson, they were all on the wrong side of thirty as the Me Decade got underway. Detroit would have to replace them with new blood, but finding top notch skaters was getting a lot harder.

The Farm System dried up

The Wings failed to win a Stanley Cup title in the 1960s, but they did several other things right: they kept Howe and Delvecchio and other stars in their prime together, and they kept funneling young players up the ladder to the big league club. As a result they went to the Stanley Cup Finals four times in six years between 1961 and 1966 under the guidance of coach Sid Abel.

In the 1970s the Detroit farm system made a giant sucking sound and failed to produce the players it needed to continue in the post-Howe era. As a result, while other teams got stronger, the Wings stagnated. In 1970-71, Howe’s last season, they only managed 55 points, the lowest total for the team since the 1946-47 season. They finished in seventh place, the lowest slot the Wings had ever occupied. They would miss the playoffs for seven straight seasons in the 1970s.

Even though most young players coming up through the system in the 1970s were only mildly talented, there were a small number who matriculated to Detroit only to be sent away in terrible deals. Which leads us to…

Nick Harkness had replaced Abel as Detroit’s head coach for the 1970-71 season. Apparently his terrible record as head coach was enough to convince team owner’s that he deserved to be elevated to general manager. This was one of the worst decisions in the history of the franchise. Harkness, while a success in the college game, was not able to motivate professional players. Years before the Tigers tried Bo Schembechler in the front office, the Wings had already proved that a college man was not meant for the pro game during the Harkness experiment.

Harkness was overmatched at the pro level and he was also pretty bad at judging talent and managing players. He traded Webster after the 1970-71 season, but that wasn’t his stupidest deal. During that same season he dealt Garry Unger away because the talented left-handed shooting center wouldn’t cut his hair. Yes, really. All Unger ended up doing after being exiled from Detroit was make seven All-Star teams and score at least 30 goals in eight straight campaigns. For a while Unger also held the league record for most consecutive games played. He was just the type of player you could build a team around. And he was exiled because he wouldn’t trim his mullet.

Harkness also liked to hire and fire head coaches. During his three years as Detroit’s GM, Harkness employed four head coaches, not including his dismal 12-22-4 stretch. It’s no wonder fans called this era “Darkness with Harkness.”

After Harkness was axed, things didn’t really get any better. The team turned the clock backwards and tried Delvecchio and then Ted Lindsay as GMs for the rest of the 1970s.

One of the first deals Delvecchio swung as GM was a real stinker. Marcel Dionne was a first round selection (second overall) in the 1971 NHL Draft by Detroit, a reward for that terrible season in Gordie’s swan song. In his first four seasons in a Red Wings sweater, the Quebec-born Dionne scored 78, points, following it with 90, 78, and finally 121 in the 1974-75 campaign when he was an All-Star and won the Lady Byng Trophy. So what did Delvecchio do? He traded the 23-year old Dionne to Los Angeles with another player for Dan Maloney, Terry Harper and a draft pick. Dionne finished his stellar career in the top three in scoring and top five in goals. He ended up in the Hall of Fame. Ouch.

For seven seasons starting in 1972, the World Hockey Association served as a direct competitor to the NHL. While it ultimately failed to survive due to financial reasons, the upstart league had an immediate and lasting impact on the game. In the short term, the WHA outpaced teams like the Red Wings who were slow to scout American-born players and were cheap n paying young players period. As a result, many great young hockey players ended up in the WHA (like Wayne Gretzky and Gordie’s star son Mark Howe), and several NHL franchises suffered, including the Red Wings.

The only playoff appearance the Wings made in the decade was in 1978 when coach Bobby Kromm took them to the quarterfinals against Montreal, coached by a fella named Scotty Bowman. The Wings lost in five games, but then they took a step back the following year, missing the playoffs in five consecutive seasons. It wasn’t until pizza magnate Mike Ilitch bought the team from  Bruce Norris for $8 million in 1982 that things started to turn around. Within a few years they would back in the playoffs on a regular basis, and they’ve won four titles since Ilitch took over.

It’s all good now, as the Wings seem destined to make the playoffs for the 25th straight season with young star Dylan Larkin poised to lead the franchise into the future. But there was a time when the Red Wings were known as “The Dead Wings.” Let’s not go back there folks, even if I would prefer to be 12 years old again.