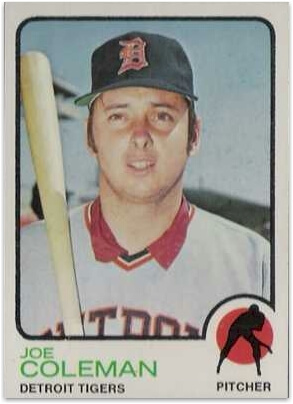 For some reason, pitcher Joe Coleman held a bat while posing for his Topps baseball card in 1973.

Unless you’ve stood on a baseball field, it may not be apparent how close the pitcher is to home plate. You know home plate, that place where an enemy player is holding a 33-38 ounce piece of wood shaped like a club?

When a pitcher has completed his delivery, he’s about 55 feet from the batter. His pitch may travel more than 90 miles per hour. The batter has less than a second to decide whether to hit the baseball, and if he makes contact the pitcher has even less time to get out of the way of a screaming line drive. It’s a wonder more pitchers aren’t seriously injured by batted balls.

In 1971, during a spring training game, a new Tigers’ pitcher, one who hadn’t even started a game for Detroit yet, was victim to a line drive. The incident was one of the most startling to ever take place on a diamond. But the recovery made by that pitcher proved remarkable.

Tossing a baseball was in Joe Coleman’s blood. Professional baseball was the family business: Joe Sr. was a major league pitcher for a decade starting in 1942, with a career punctured by service in World War II. The elder Coleman was a tall, muscular athlete with long arms and narrow face. But he was plagued by control problems: the harder Joe Sr. tried to throw the baseball, the less he knew where it would end up. He was 52-76 in a career spent mostly in Philadelphia with the dreadful Athletics. He finished his career in 1955 with the Tigers. Ten years later, his son, who looked remarkably like him, debuted with the Senators.

Joe Jr. was only 18, just months removed from his high school graduation, when he tossed his first pitch in the major leagues. It worked out pretty well: Coleman fired a four-hitter to defeat Catfish Hunter and the A’s in his debut. He beat Detroit in his next start, going the distance again. This started his stint as a pitching prodigy. The younger Coleman could throw harder and more accurately than his Paw, and at the age of 20 in 1967, he joined Washington’s rotation, a skinny 6’3 right-hander with a three-quarter sidearm delivery. He never won more than a dozen games for the Sens, but that’s because the team stunk. At the winter meetings after the ’70 season, the Tigers acquired him in the big swap that also brought Aurelio Rodriguez and Eddie Brinkman to the Motor City. Coleman was expected to fall in line in the Detroit rotation after Mickey Lolich and Joe Niekro, but fate (in the form of a line drive) stepped in first the next spring in Lakeland.

The batter was Ted Simmons, a former Michigan Wolverine, a squat man with a wide ass and long hair. Simmons looked more like the kids holding signs protesting the Vietnam War than he did a ballplayer. In a game between the Cardinals and the Tigers, the switch-hitting Simmons, a .300 hitter the season before, was batting lefthanded against Coleman. It was supposed to be a long day for Joe, a start to stretch his arm out, the plan being for him to pitch at least seven innings as he prepped for the regular season a few weeks later. Simmons took a few pitches and fouled one back before lining a pitch back up the middle.

Before Simmons could even get a third of the way down the line, he knew something was terribly wrong. The catcher was Jim Price, who was taking his first step toward the mound after he heard a terrific thud. The ball had exploded off Simmons’ bat and struck Coleman in the forehead. The Detroit pitcher was prone on the dirt, flat on his back and grabbing his head with his glove and pitching hand. The unthinkable had happened.

Batters don’t like to talk about the fear. They push it down inside and ignore it, refusing to acknowledge it. It’s the fear of being hit by a pitched ball. When a batter is struck in the head, it can be career-ending. The famed Detroit catcher Mickey Cochrane had nearly died when he was beaned by a pitch, which ended his playing and managerial career. He suffered from headaches the rest of his life. Some said Mickey never fully recovered.

Pitchers deal with the fear too. A baseball off the bat can travel well over 100 miles per hour, far faster than a pitcher can throw it. Even though the pitcher has a glove, there’s little time to protect themselves if the ball is lined at them from less than 20 yards away. Coleman would later admit that he never saw the ball coming.

“I heard the bat hit the ball,” Joe said, “the next thing I know I’m on my back and my teammates are standing over me. It happened fast.”

Billy Martin was in his first spring camp as manager of the Tigers. He didn’t know much about Coleman, other than he sometimes struggled to control his fastball. After his pitcher fell to the ground, Martin knew it was bad.

“I’ve been around [the game] a bit, and I know when a guy’s been knocked hard,” Martin said to reporters the next day. “[He] looked like Muhammad Ali had punched him.”

Coleman’s condition was serious, it was feared that he had fractured his skull. At first he motioned to his teammates to help him stand, but then everything went dark. Coleman was unconscious for several minutes while medical personnel examined him. The game was delayed for close to twenty minutes and reportedly one fan fainted after seeing Coleman carted from the field.

“It was as bad as anything I ever saw on a baseball diamond,” Al Kaline said.

Coleman was admitted to the hospital where he regained consciousness, but he had a hell of a headache. He spent two weeks in the hospital under observation and it was determined that he had suffered a linear skull fracture.

The regular season started with Coleman on the disabled list, and for a while his grizzly injury was not only the talk of the Tiger clubhouse, but of baseball. Some experts suggested that the commissioner should consider having pitchers wear helmets on the mound as a precaution.

Amazingly, only six weeks after his head injury, Colemand returned to the roster. On April 24 in Oakland, Coleman started and pitched into the sixth inning against the A’s. But he struggled to control his pitches, and complained later that he was a little dizzy and dehydrated. He made one more start on the west coast and defeated the Angels, but was once again a little disoriented. Remarkably, he stayed on the active roster and made a full recovery, pitching most of the 1971 season on three days rest in a skeleton staff with Lolich and Les Cain.

Coleman overcame the head injury and won twelve games after the All-Star break. On the next-to-the-last day of the season, Coleman pitched a complete game in Cleveland to win his twentieth game of the year. He’d come a long way from a ringing headache to become a workhorse and a twenty-game winner. He finished the season with 236 strikeouts and he brushed aside any fear of the baseball that might have (understandably) haunted him after the spring training incident.

“After [my skull was fractured], I thought about it for about three starts,” Coleman said. “But I had a job and I needed to be on that mound and take the ball, and that’s how I got over it. I didn’t know if I would, but I figured it wouldn’t happen again.”

The following season Coleman was an All-Star and his 19 victories helped the Tigers to the division title. He won 23 more times in 1973, giving him 62 wins in his first three years with Detroit. The son had truly surpassed the father, and Coleman Jr. went on to pitch 15 years in the majors until a sore shoulder halted him in 1979.