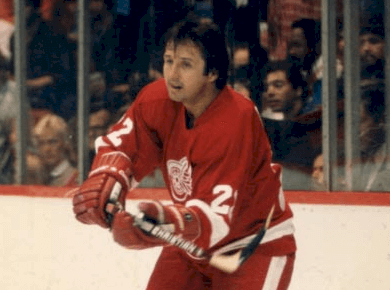 Hall of Fame defenceman Brad Park played the final two seasons of his career with Detroit before serving as head coach for part of one season with the Red Wings.

Has there ever been a better business deal than when Mike Ilitch snagged the Detroit Red Wings for a paltry $8 million in 1982? Last year the money gurus at Forbes magazine estimated the worth of the franchise at more than half a billion dollars. That billion with a “B.” Not a bad investment by Mr. I.

When Ilitch purchased the hockey team from the unpopular Bruce Norris, the pizza magnate recognized that he had a lot of work to do to restore the once-proud franchise to a level of success. After all, fans referred to the team as the “Dead Wings” after they managed just one playoff appearance in eleven seasons. The first step was to assess the situation on the ice and in the front office.

Success was not a given by any means. Up to the point that he purchased the Red Wings, Ilitch’s only previous business experience in sports was as owner of the Detroit Caesars, a professional softball team, for three seasons in the late 1970s. While the team was very competitive (winning two titles) and they fielded popular former Tigers Norm Cash and Jim Northrup, it was still softball. They were lobbing the ball underhand, for gosh sakes!

But Ilitch played hardball with his hockey team practically from day one. After watching and suffering through his first season as owner of the Wings (they managed just 21 wins and a last place finish), when the team got off to a slow start to the 1983-84 season he gave strict orders. His team would not be a laughingstock. Coach Nick Polano, helped by the addition of some veteran players, righted the ship and gave Ilitch a playoff team the next two seasons despite a losing record. Still, playoff success and respect still seemed far away.

In 1985 the team had third-year player Steve Yzerman in tow (the future legend was still only 20 years old), but they still got off to a terrible start. With their record at 8-23-4, Ilitch had seen enough. He determined that he needed a new leader on the ice. On Christmas Eve 1985, while most people were getting ready to tear open presents and eat a lot of ham and pie with family, Mr. Ilitch started a search. Rather quickly he fixed on one person – Brad Park.

Park was one of the first players Ilitch had acquired after purchasing the Red Wings. The veteran defenceman had helped the team make those two playoff appearances under Polano. As a player, Park was generally considered the second-best defenceman of his generation, rating behind Bobby Orr, his rival. Now, Park was retired, having finally hung up his skates as a player after 17 seasons and nine All-Star selections. Park was well-respected in the NHL and he commanded attention from young players in the latter stages of his career.

On December 24th, Ilitch called Park and offered him the job. Park didn’t need to think about it, he accepted immediately, in spite of the fact that Detroit had the worst record in the National Hockey League as Christmas approached.

“Some people will think I’m nuts, but I couldn’t turn down the chance to be here,” Park revealed. “There are only two places I will consider coaching: one is Boston and the other is here.”

Park had spent eight years playing for the Bruins and his team made the playoffs each season. In fact, Park never missed the playoffs at any point in his 17-year career as a player. And it wasn’t because he was some sort of lucky charm — Park received MVP votes in eleven of his seasons and in 1988 he would be elected to the Hockey Hall of Fame.

“The only thing I lack right now is coaching experience,” Park said. “The one thing I do know is how to win. I’m going to make some mistakes, but I’m going to learn from my mistakes.”

Unfortunately for Park there were apparently too many mistakes. In his first game behind the bench, the Wings squandered a two goal lead in the third period and lost to the Islanders, 5-4. Then they lost ten of their next eleven games, surrendering more than six goals per game over that stretch. The terrible defensive play must have agonized Park, who was known for his stellar play on that side of the puck. When the team lost Yzerman to injury and managed to win only one game in February, Park’s fate was sealed. Ilitch didn’t even bother to give his new coach a vote of confidence.

“We’ll have to look at our situation at the end of the season and decide where to go from there,” Ilitch told the Detroit Free Press in March.

On the final night of the regular season the team beat the Maple Leafs, but it was merely a hallow sendoff for their short-lived coach. The Wings managed only 17 wins on the season, going 9-34-2 under Park. The ax fell a week later when Ilitch announced that Park would not come back. A few weeks later the jolly Frenchman Jacques Demers was hired. In one of the most amazing turnarounds in NHL history, Demers spurred the Wings all the way to the Conference Finals, before Yzerman and gang were dismissed by Wayne Gretzky’s great Edmonton team.

Brad Park was only 37 years old when he was hired and fired by the Red Wings, but he never got another chance to coach an NHL team. Maybe he wished he had never answered his phone on Christmas Eve, but he was honest about the task he faced when he took over the team in 1985-86.

“They could [have brought] in God and [the team] would still have made mistakes,” Park said.