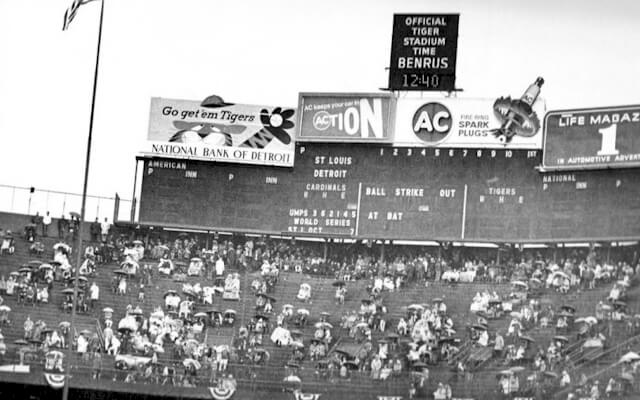 The upper deck bleachers at Tiger Stadium in Detroit.

For those of us who remember Tiger Stadium, one of the most enduring memories are the bleachers in center and right-center field. For years Tiger Stadium was the only ballpark with double-deck bleachers, and they were a haven for some of the most “special” fans.

More than once, the team closed the bleachers, most notably in 1980 after a series of incidents.

“I’m not going to tolerate a few rowdies spoiling baseball in this town for the vast majority,” general manager Jim Campbell said after he shut the bleachers at The Corner in mid-June in 1980.

Six people were arrested and 14 fans ticketed during a Detroit/Milwaukee doubleheader on June 16, 1980. The actions of a few of those “rowdies” was dangerous.

A pair of Milwaukee outfielders, Gorman Thomas and Sixto Lezcano, were showered with debris during the doubleheader. The following day, Campbell closed the 10,500 seat bleacher sections at the old ballpark.

After he caught the final out of the second game, Thomas fired the ball into the bleachers. “I thought maybe they’d kill themselves fighting for it,” he said.

“I’m fed up with them. I’m sick and tired, it’s dangerous. It gives the city a bad name.”

The closing coincided with a winning stretch by the Tigers, who got off to a rocky start in 1980. With a young roster and a leadership vacuum among the players, the Tigers were at a crossroad.

“There’s a new chemistry on this team, a new mood,” Sparky said after the club inched their way back to the .500 mark in July.

That new chemistry included the young double play combo, Alan Trammell and Lou Whitaker, two skinny kids getting acclimated to the major leagues in their third full season. Catcher Lance Parrish, pitcher Jack Morris, and outfielder Steve Kemp were also on a team in the midst of a rebuild.

But the bleacher fiasco pushed all that down the sports pages, as once again Detroit fans got a bad rap.

“I don’t think it’s everyone,” Kemp said in an interview with the Associated Press. “There are a few people who want to make a name for themselves.”

If there was anyone who didn’t have patience for rowdy, long-haired, drunken fans, it was Sparky, a conservative, old-school disciplinarian. The 1980 season was Anderson’s first full year in Detroit. The previous June, Sparky was ushered in as a baseball savior, fresh off his dismissal in Cincinnati. The grey-haired skipper had something to prove. Within a few years he was back at the top of the game thanks to a group of young, talented, and hungry Tigers.

But the ballpark was part of the story too, and in 1980, with Campbell and the fans at an impasse, the bleachers remained closed for an entire home stand. Campbell was willing to forego the revenue from the cheap bleacher tickets if it meant suppressing the antics in center field.

“I had season tickets for fifteen years, starting in 1976,” says Bill Ferdland, a lifelong fan and Detroit native. “I usually sat in left field, upper deck. I loved the view from up there, but it also let me see the crazies in the bleachers. [A lot] of them were drunk by the fifth inning.”

The notorious shenanigans in the bleachers kept many families from going out there, even though for years the tickets were less than $10, a fantastic bargain to see a major league game.

Campbell finally re-opened the bleachers in July, with stipulations that fans tone down their bad language and that beer sales be halted in the seventh inning.

“This is our home and the home of the good baseball fans of Detroit,” Campbell said. “We’re not going to welcome fools into our home.”

Four years later, the bleacher closings were forgotten during a remarkable season that saw Tiger Stadium host “The Wave” and a world championship team.