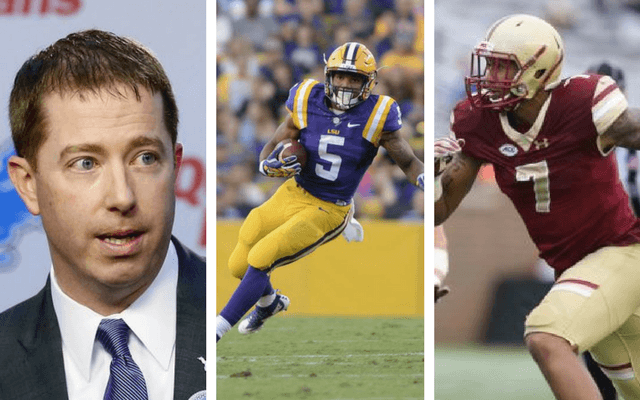 Detroit general manager Bob Quinn might have his eye on running back Derrius Guice or defensive lineman Harold Landry in the 2018 NFL Draft.

Well, it’s that time of the year again. The NFL draft commences on Thursday at 8 PM. The Detroit Lions have the 20th pick in the first round. The draft will continue on Friday and Saturday as teams sift through the available players coming out of college.

For longer than we all care to admit, the NFL draft was the biggest day of the year for the Lions. It was a time filled of hope and excitement for the upcoming season. The potential for a franchise altering draft selection overshadowed the likelihood that it would be yet another disappointing season on the field. “This will be the year. This draft will point the franchise in the right direction.” We’ve all said that phrase, or one similar to it, at one time or another; in conversations with our friends or family or co-workers. Yet year after year – despite excitement about players like Joey Harrington, Charles Rogers, Ernie Sims, and Jahvid Best – sustained success on the field never followed. Even when players like Calvin Johnson or Ndamukong Suh proved to be high-caliber players, the team has yet to win a single playoff game since 1992.

This year seems to be ACTUALLY different. It’s always exciting to see who the Lions draft in the first few rounds and to imagine their impact on the field in year one. But with Bob Quinn at the helm of his third draft in Detroit, this is a slightly different feel. After multiple draft picks in the past couple years have stepped into the starting lineup and performed well, and with others providing quality depth at various positions, it’s clear that Bob Quinn is skilled at drafting incoming rookies. Pair that with his ability to sign quality free agents, and the roster looks like it is primed for success. Mix in Quinn’s hand-chosen addition of Matt Patricia as the head coach, and it feels more like the Lions need a little nudge to get on the track of sustained success instead of the franchise altering shift they’ve needed in past years.

What the Lions will get in the draft is a mystery to everyone, including Bob Quinn himself. There have already been two trades involving picks in the top-12 since the end of last season. The Browns have two top-4 selections, including first overall, and the Bills and Patriots both have two first round selections as well. The 2018 NFL Draft is shaping up to be an exciting draft with lots of movement up and down the first round, maybe even including the Lions.

Detroit might even be able to land one of the highest rated prospects in the draft this year, if similar falls down the draft take place like in years past and/or if Bob Quinn get aggressive and trades up. There a few positions of need on the roster that could be addressed in the first round: defensive end, defensive tackle, and interior offensive lineman being the most glaring. Running back, tight end, and linebacker are likely to be addressed later in the draft, but one of those positions could be a surprise pick on Thursday if things shake out a certain way. Most of those positions have at least one highly rated prospect and few others that could start in Detroit starting on day one: 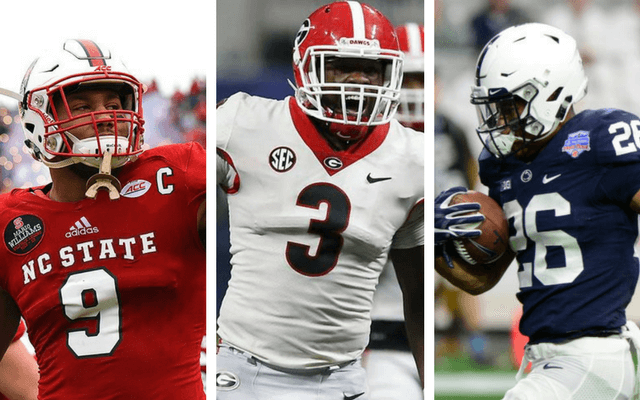 Bradley Chubb, EDGE, NC State – the unquestioned best edge rusher in the draft, he is a virtual lock to be a top-5 pick. The only way he is still on the board when the Colts are on the clock at 6th is if there have been four quarterbacks taken.

Saquon Barkley, RB, Penn State – the best running back prospect in what seems like forever, I would only be mildly surprised if he ended up being taken 1st overall. That shouldn’t happen, but it’s possible. If he hasn’t been drafted by the time the Buccaneers pick at 7, Bob Quinn should get on the phone and pull a Julio Jones style trade to get the Lions the closest thing they’ve had to Barry Sanders since…Barry Sanders.

Quenton Nelson, G, Notre Dame – not a sexy pick by any means, but Nelson has been linked to the Bears at #8 consistently throughout the pre-draft season and would be a great pick for the Lions. He’s the best interior lineman in this year’s draft, and would solidify Detroit’s line.

Roquan Smith, LB, Georgia – even though the Lions signed a few linebackers in free agency, Smith would be too much of a talent to pass up with the 20th pick. The rangy linebacker reminds me of Bobby Wagner, and could even muster a trade up by Bob Quinn if he gets past the Raiders at #10.

Vita Vea, DT, Washington – two months ago, it seemed much more likely that Vea would be available for the Lions. Now it would be a stroke of luck if the massive run-stopper out of Washington slid to the Lions at 20. He would give Matt Patricia a lot of flexibility to switch up defensive schemes throughout the season. 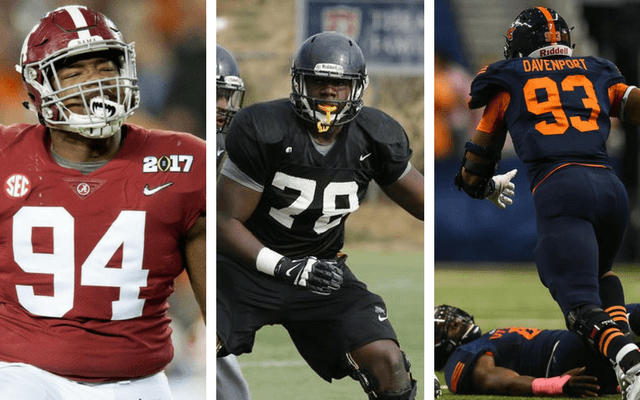 Marcus Davenport, DE, Texas-San Antonio – Davenport could slide right into the defensive end spot across the line from Ziggy Ansah in 2018. Depending on how he plays, that could make Bob Quinn’s decision of what to do with Ansah in 2019 much easier.

Harold Landry, EDGE, Boston College – Landry has been a popular choice for the Lions in many mock drafts this year. Even though they are totally different positions, Landry would give the Lions defense a similar flexibility that Vea would.

James Daniels, C, Iowa – arguably the best center in the draft, Daniel would step into the void that Travis Swanson left, and hopefully solidify the center position for the next decade.

Da’Ron Payne, DT, Alabama – a college teammate of A’Shawn Robinson, reuniting the two could cause headaches for the rushing attacks of the other NFC North teams.

Taven Bryan, DT, Florida – the athletic freak didn’t have the best college numbers, but could be both an adept pass rusher and run stuffer in the NFL if put into the right scheme. 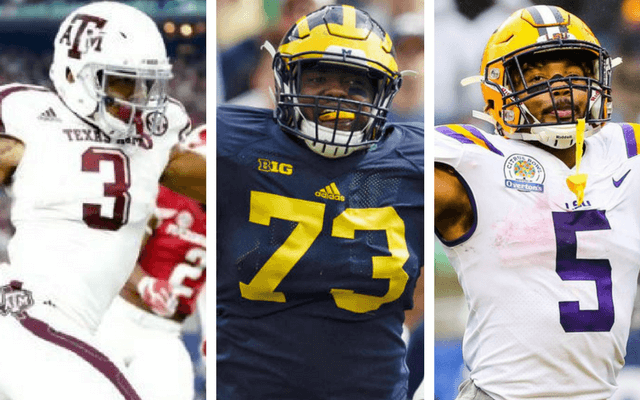 Maurice Hurst, DT, Michigan – this hometown pick would also fill a big position of need for the Lions. Hurst was diagnosed with a heart condition at the combine, but was cleared to participate in Michigan’s pro day. The Lions could end up with a steal if Hurst’s medicals turn out to be a non-issue.

Derrius Guice, RB, LSU – being compared to Marshawn Lynch, Guice could be a more natural runner than Saquan Barkley. The Lions desperately need to fix the running game, and LeGarrett Blount is more of a stopgap player than a long-term solution.

Christian Kirk, WR, Texas A&M – Golden Tate’s contract expires at the end of the 2018 season, and Kirk could be a built-in replacement. Very productive in each of his three college seasons, Kirk is a sure-handed pass-catcher that would give the Lions a solid young duo at wide out along with Kenny Golladay.

Haydent Hurst, TE, South Carolina – drafting a tight end in the first round would not be a good look for Bob Quinn after cutting Eric Ebron this offseason. The position is an undeniable need though, and Hurst is athletic enough to fill Ebron’s roll in the passing game.

No matter what happens during the first round of the draft, it’s shaping up to be an exciting event. Lions’ fans hope Bob Quinn will be able to acquire a player or two that can help point the Lions toward the playoffs, and hopefully to that elusive playoff win in 2018 or beyond.