When will the Tigers assemble an effective bullpen? 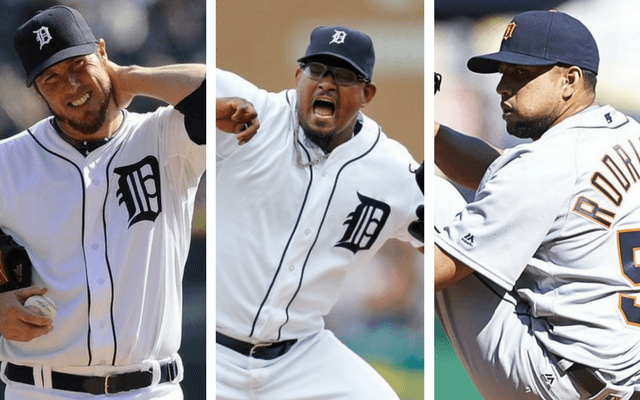 Joe Nathan, Jose Valverde, and Francisco Rodriguez are just three relievers who have made life interesting and stressful in the Detroit bullpen in recent years.

Walking on the beach, relaxing poolside, barbecuing and even watching paint dry. All better ways to spend one’s free time during the summer than watching the Detroit Tigers’ inept bullpen try to record the final outs of a game.

Detroit’s bullpen has been making it painful for fans to watch the end of Tigers games seemingly forever, even as the club pulled off four straight division crowns from 2011-14.

Yet, general manager Al Avila did nothing to address the woes of the back-end of the pen in the offseason, and the Tigers have paid for it immensely.

Francisco Rodriguez was an epic failure in the closer role to start the season, and Justin Wilson, the man who replaced K-Rod and did so in a more than satisfactory manner, has since been jettisoned to the Chicago Cubs in a move to help the Tigers for the future.

Even with Wilson, Detroit’s bullpen was in a state of flux.

Bruce Rondon has continued to be a disappointment, with subpar results and a failure to be anything but a malcontent on the mound.

Anibal Sanchez has struggled to be relevant as both a relief arm and starter, while middle inning arms Blaine Hardy, Arcenio Leon and Kyle Ryan were all horribly ineffective in their respective stints with the Tigers this season.

Despite the noted inefficiencies of the pen, Alex Wilson has continued to be fairly reliable, and Rule 5 draft pick Daniel Stumpf has been at least semi-respectable as a left-handed option.

The brightest spot of all in the pen, though, has been 28-year-old right-hander Shane Greene, who has taken over the closer duties from the departed Justin Wilson.

After the Tigers’ series split against Baltimore, he was the only Detroit relief pitcher with less hits allowed than innings pitched (31 hits in 49 2/3 innings) and a fielding independent pitching mark below four (3.67).

In July, Greene was absolutely dominant, failing to allow a run in 13 games and 10 2/3 innings.

This season, he also has shown a propensity for racking up strikeouts, while being able to crank up the velocity on his pitches when he has to.

According to FanGraphs, he has averaged above 95 miles per hour on his sinker — the fastest that he’s ever consistently thrown the pitch. The sinker, by the way, is the pitch that he has thrown the most often this season at over 50 percent of the time.

His four-seam fastball, which he has thrown just a little over five percent of the time, has clocked in on average around 96 mph this season — a career-high in average velocity for Greene.

It’s looking more and more like the former Yankees farmhand is ready to be the Tigers’ closer from day one in 2018.

Obviously, if he consistently gets shelled the rest of the way this year, my viewpoint on him being the closer next season might change.

However, he definitely possesses the inside track on the job due to two things: a lack of other solid internal candidates and the front office’s expected plan to shed payroll this offseason.

Internally, 22-year-old right-hander Joe Jiménez is the only other major league arm that’s viewed as a potential closer.

No offense to Alex Wilson, but he doesn’t strike out batters at a high enough clip to be legitimately considered for the role.

Jiménez, meanwhile, has struggled in his “cup of Joe” with the Tigers so far, with more hits and runs allowed than innings pitched.

It screams to me and I believe to the Tigers organization that he’s not ready just yet to pitch at the back-end of games.

In further evaluating Greene’s candidacy for the closer gig, the other factor to consider is the Tigers’ willingness to shed salary in the coming offseason.

It is much more likely that Avila & Co. cut payroll than significantly add to it for 2018 and beyond.

At the very least, they’re likely to move on from both Sanchez and second baseman Ian Kinsler by buying them out for $5 million each instead of picking up their hefty team options ($10 million for Kinsler and $16 million for Sanchez, respectively).

And then, there’s the possibility that they trade longtime ace Justin Verlander, who is owed $28 million annually through 2019, in order to attain further salary relief.

All of that potential salary shedding, with the intent of getting below the 2018 luxury tax threshold of $197 million, enhances Greene’s chances of capturing the closer job going into next season. A reliever with significant closing experience — an arm that would demand an expensive contract — probably won’t be added because of the Tigers’ aim to avoid paying the luxury tax.

With a strong finish to the 2017 campaign, next spring, Greene should be named Detroit’s Opening Day closer.