Will Tigers’ lopsided right-handed lineup be a handicap? 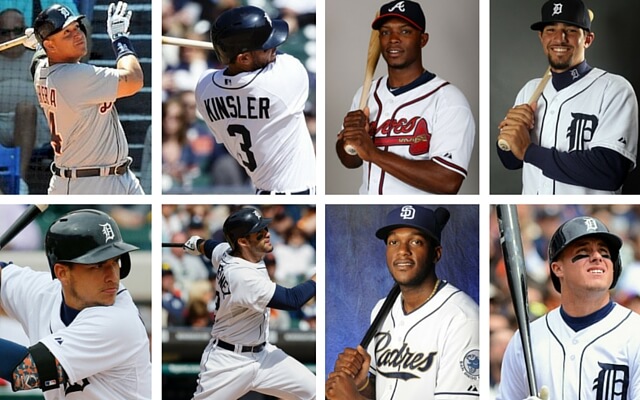 The Tigers have eight everyday players who bat right-handed.

This year the Detroit Tigers will feature an everyday lineup with eight right-handed batters and one switch-hitter (assuming Cameron Maybin gets the lion’s share of playing time in center field). Although it’s quite a potent lineup, it’s a remarkably lopsided one.

New GM Al Avila isn’t entirely responsible for this tilt to the right—he inherited most of this team. But the two lineup changes he has made—Justin Upton in left field and Maybin in center—certainly exacerbated the imbalance.

You can argue this one-sidedness doesn’t matter, but the numbers say it does. To take a fair measure, examine the Tiger regulars’ OPS— on-base plus slugging, the handiest quick measure of offensive performance—against righties and lefties over the last three seasons.

Here are those figures for the cumulative OPS from 2013, 2014, and 2015: Only Maybin has a “reverse split” with an OPS over that three-year period of.639 vs. lefties and .667 vs. righties. That’s not a big difference—and a .700 OPS is the rough benchmark for what establishes an average major-league hitter anyway, so Maybin is at best slightly less mediocre against righties.

Fortunately, switch-hitting Victor Martinez hit righties substantially better (.883) than lefties (.794) over that three-year period. But the other seven regulars hit lefties better than righties: Kinsler .783 vs .740; Upton .859 vs. 801; Miggy 1.040 vs. .962; JD Martinez .862 vs. .833; Castellanos .806 vs. 677; McCann .883 vs. 613; Iglesias .823 vs. .683. Add up all nine differentials—and you get a lineup with a cumulative OPS 620 points higher versus lefties than versus righties.  Also, note that the bottom four men in the lineup are below .700 vs. right-handed pitching, which means only after the first five batters, the lineup descends into mediocrity. And putting Gose in for Maybin doesn’t help all that much—his OPS over the same period is just .705 against righties—reducing that cumulative split by only thirty-eight points.

Of course, that’s not the whole story. You also have to factor in the opposing pitchers. Apart from a few exceptions, most right-handed pitchers perform better against right-handed batters. And the starting staffs of the Tigers’ Central Division rivals are stacked with righties. The Indians have no lefties in their projected starting rotation (Kluber, Carrasco, Salazar, Bauer, Tomlin, Cody Anderson—all six are righties). The White Sox have southpaw Chris Sale—and righties Quintana, Rondon, Danks, and Eric Johnson in their top five. The Royals have lefty Danny Duffy—but otherwise five righty starters in Kennedy, Ventura. Volquez, Medlen, and Chris Young. The Twins’ fifth starter is lefty Tommy Milone, but the top four in their rotation are all righties.

That’s a total of only three lefties in the Central rivals’ starting rotations—and one of them is Sale, who does a pretty good job getting anybody out. How often do you think Detroit will be seeing lefty starters in those seventy-two games? I would guess very few—since the Twins and Royals will probably maneuver their rotations to avoid starting their lone lefty against Detroit, if at all possible.

And most clubs outside the division will try to do exactly the same thing. In the overwhelming majority of their seventy-two games against their divisional rivals, and very likely in a large majority of their other games, the Tigers’ lopsided lineup will be facing right-handed starters—and will suffer accordingly.

It’s doubtful Detroit will see many lefty relievers this year either—but these days most pens have four or more righties ready to see action. The Royals’ big three relief aces—Herrera, Davis, and Holland—are all righties, for example. Keeping bullpen lefties out of the game is not going to be a major accomplishment for the Detroit offense.

And nobody is going to be quaking if the Tigers go to their bench and pinch-hit Anthony Gose or Tyler Collins or Jerrod Saltalamacchia—these lefties available as reserves aren’t exactly bashers, they’re inferior hitters compared to the guys they’d be replacing, which is why the club is stuck with the lopsided lineup in the first place.

This is one reason why it would have been vastly preferable to acquire at least one left-handed-hitting outfielder rather than Maybin and Upton—someone like Alex Gordon.

The last thing any opposing manager will want to do is run a southpaw out on the mound against this team. And there will be very few innings that they do. Fans better hope right makes might this year.