Windsor Arena, first home of the Red Wings, is still standing — for now 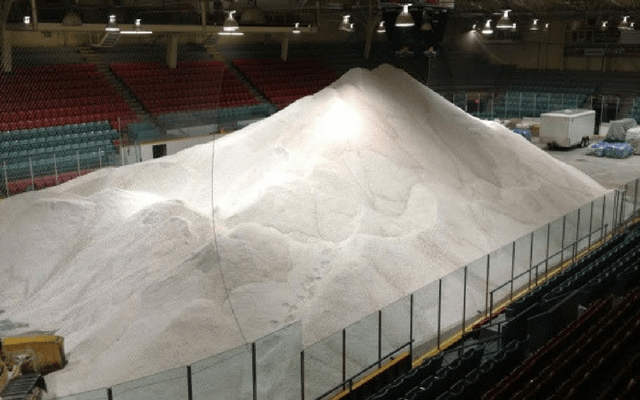 A large mound of road salt sits on the rink of Windsor Arena in this photo from 2012. [Photo credit: Vince Robinet / CBC Windsor]

The first home of the Detroit Red Wings will soon come down, but probably not before it outlasts two of its successors.

Windsor Arena, across the Detroit River in downtown Windsor, Ontario, has been closed for five years. Plans are in place to take it down, but demolition has yet to be scheduled.

That means “The Barn” may stay stand longer than both the Olympia, which was demolished in 1987, and Joe Louis Arena, whose demolition is set to begin in May

Windsor Arena was the longtime home of the Windsor Spitfires of the Ontario Hockey League before they moved to a new venue in 2008. The arena saw its last hockey game in 2012, when the University of Windsor hockey team played a final home game there before moving out.
The arena last made news in 2014, when the CBC took a photo of the interior with a startling sight. With the boards and glass still in place around the former playing surface, the city of Windsor was stockpiling a mountain of road salt that stretched across the rink and nearly touched the lights overhead.

Anticipating a possible strike by its salt supplier, the city had converted the arena from hockey rink to warehouse seemingly overnight. But since then, the building has mostly just stood there, awaiting its demise.

Windsor Arena opened in 1924 as Border Cities Arena, with a capacity of 6,000. When Detroit businessman Charles Hughes secured an NHL expansion team in 1926 and stocked it with players from the defunct Victoria Cougars, he had big plans for a state-of-the-art arena in Detroit. But he needed a place for his team to play in the meantime, so he looked across the border to Windsor.

The Cougars had won the Stanley Cup just two seasons earlier, but in Windsor, with their aging roster and status as a permanent road team, they stumbled. They were shut out in their Windsor opener by the Boston Bruins, 2-0, and finished with the NHL’s worst record.

That sorry showing would prompt Hughes to bring in Jack Adams the following year for the team’s debut at the Olympia in Detroit. Adams would serve 36 years in Detroit either behind the bench or in the front office, bringing home seven Stanley Cups.

But before turning Detroit into Hockeytown, the franchise struggled with an identity crisis in its first few seasons, which went beyond just its changing name, from the Cougars to the Falcons to the Red Wings. The franchise’s debut across an international border left it with unwanted dual citizenship. When the Olympia opened, the loudest home fans were from across the border, and their loyalties lay with their country rather than with the itinerant team that had parked in Windsor for a year. When a Canadian team came to Detroit in those early years, they were the crowd favorites. “It was the first place I ever saw that the home team wasn’t popular,” Adams later recalled to the Detroit News.

Windsor Arena’s time as an NHL arena was short, but it saw decades of junior hockey as the home of the Spitfires. Before he was a mainstay on “Hockey Night in Canada,” Don Cherry started his career with the Spitfires in 1951. Chicago Blackhawks head coach Joel Quenneville was a Spitfire in the mid-1970s. Adam Graves was a rookie in Windsor when the Red Wings drafted him in the first round in 1986. Graves’ Spitfires went undefeated in the OHL playoffs in 1988.

By the 2000s, the arena was an anachronism, and it was only a matter of time before the Spitfires decamped to a new facility. Yet as we learned with last year’s closure of Joe Louis Arena, and with the shuttering of other old big league hockey barns in Edmonton and Long Island, while we gain legroom and amenities with new buildings, we lose the intimacy and energy of the old ones.

In an appreciation of Windsor Arena last year, Dave Jewell recalled the immediacy and intensity of the “Madhouse on McDougall,” whose capacity was just 4,500 when it closed.

“Every word was amplified. Every play felt like it was happening all around you,” Jewell wrote. “There was no escaping, for both fans and players.”

But once the Spitfires and the university team were both gone, there was little use for Windsor Arena, other than to stash road salt. In 2016, Windsor’s Catholic Central High School got approval from the city and funding from the province to build a new school on the site of the arena. A city spokesperson told me the school is still in the planning phases of a new facility, so there is no timeline yet for the start of construction, or for the demolition of the arena.

Still, it may be just a matter of time before the old barn comes down after more than nine decades, taking a piece of Red Wings history with it.