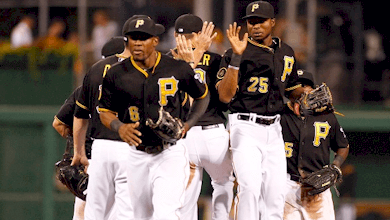 The Pittsburgh Pirates won 98 games in 2015 but had to play a wild card game, which they lost.

This season, the three best teams in baseball were all in the same division, which meant two of them could not advance to the league championship series. You have to feel sorry for the Pittsburgh Pirates, who had to play a wild-card game against the league’s probable Cy Young winner after winning ninety-eight games. The Cardinals won 100 games and their division but then had to face baseball’s second- or third-best team just to get to the LCS.

They were far from the only good teams to meet a cruel October fate. Plenty of 100-win teams have failed to reach the World Series since the divisional playoff formats have been in place. Even before then, winning 100 games was no guarantee of getting into the Fall Classic.

Detroit fans will especially remember the 1961 team, when the Tigers, winners of 101 games, finished eight games behind the New York Yankees and had to go home after the regular season. Only the 1984 and 1968 teams won more regular-season games.

That ’61 season imploded in a crushing series in Yankee Stadium in early September, which taught my eleven-year-old self how much misery a baseball fan must endure. But 1961, being the first expansion year, was unique. The sixty-year-long arrangement of two eight-team leagues was disrupted by adding two more teams to the AL and expanding the season from 154 to 162 games.. With two new teams came 20 percent more players. Pitching was diluted, which helps explain how Norm Cash hit .361 (while never hitting even .290 in any other season in his career) and Roger Maris had sixty-one homers (while never even hitting even forty in any other year).

Because eight games were added to the schedule in 1961, 100 wins means less now than it did before that watershed year. So look instead at winning percentage. By that measurement, none of the three best seasons in Tigers franchise history resulted in world championships. In 1934, the Tigers went 101-53 for their all-time best mark of .656 but lost in the World Series. In 1915, the Tigers won 100 games for a .649 percentage but finished two-and-a-half games behind the Red Sox and thus didn’t even play in the World Series. And in 1909, the Tigers went 98-54 for a .645 mark but also lost in October to Honus Wagner and the Pittsburgh Pirates.

Many other teams have endured similar or greater post-season frustrations after spectacular regular seasons. Teams that won more than two-thirds of their regular-season games but lost the World Series include the 1995 Indians, the 1969 Orioles, the 1946 Red Sox, the 1943 Cardinals, the 1931 Philadelphia Athletics, the 1912 Giants, the 1910 Cubs, and the 1906 Cubs (who played at a spectacular .753 clip in the regular season).

Both the 1904 Giants and the 1902 Pirates (who played .741 ball!) played before there was a World Series. Other clubs with great seasons who didn’t finish first in their league include the 1909 Cubs (.680) and the 1954 Yankees, who won 103 games for a .669 mark but finished eight games behind the Indians, who themselves were swept in the series after their incredible .721 season. A more recent horrendous post-season stumble occurred when the 2001 Seattle Mariners played .716 ball, winning 116 games, but lost in the ALCS in five games.

This season marked the centennial of that 1915 Detroit season. It passed unnoticed. The Tigers that year featured a great outfield. Ty Cobb batted .369, Bobby Veach .313, and Sam Crawford .299. Cobb scored 144 runs, and Veach and Crawford each drove in 112.

That club and the 1961 team share the distinction of being the best Tiger teams that never won a pennant. So don’t feel too sorry for this year’s NL Central teams.