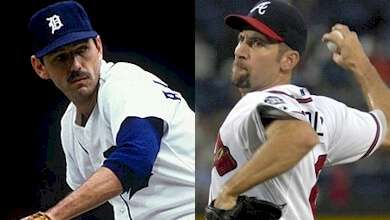 Without Doyle Alexander, the Tigers never would have won the 1987 AL East title. The price to get him was prospect John Smoltz, but it was worth it.

Every year when the trade deadline approaches, I always think of one trade. It was a trade that many Tiger fans think was horrible, but it was in fact, the best trade the team ever made.

On August 12, 1987, in the thick of a pennant race with the Toronto Blue Jays, the Tigers traded a young prospect to the Atlanta Braves for veteran starter Doyle Alexander.

The part that many Tiger fans remember is that the young prospect was John Smoltz, who became a Cy Young Award winner and Hall of Famer after a stellar career with the Braves.

I have heard many Tiger fans grumble about this deal, knowing in retrospect what Detroit gave up.

How quickly we forget the flip side.

The flip side was that Doyle Alexander went 9-0 … yes 9-0 … with the Tigers down the stretch, and had an earned run average of just 1.53 with Detroit in eleven clutch starts that season.

The playoff race came down to the final game of the season with the Tigers edging the Blue Jays to win the division and earn a spot in the playoffs when a hometown son pitched a brilliant game on the last Sunday of the season.

Had Alexander lost just one of those starts, it would have been Toronto winning the division.

In the long run, yes, the Tigers’ next decade was hurt without having Smoltz, but at the time, there was no way to know Smoltz would go on to have the dominant career that he had. Many prospects, especially pitching prospects, don’t pan out. Some become decent players. Very few become Hall of Famers.

The ’87 Tigers, with a team led by Alan Trammell, Lou Whitaker, Jack Morris and plenty of other strong veterans, needed to win now. The clock was ticking on this Detroit window of opportunity for a second championship. The 1984 Tigers had one of the best seasons in baseball history, but the Tigers, who were strong throughout the 1980s, only had one pennant and one championship.

But the acquisition of Alexander in 1987 opened that window a little wider after he pitched the Tigers to the playoffs.

Of course what sticks with Tiger fans is that Alexander was 0-2 in the playoffs and the Tigers lost to the Minnesota Twins, falling short of another chance at a World Series title.

Alexander struggled in the postseason, that is certain, but what also is certain is they never would have been there in the first place without the boost he provided at the trade deadline. Some revisionists also claim Alexander was a one-trick pony, but the veteran righthander came back in 1988 and made 34 starts for the Tigers, winning 14 games. That team led the AL East for most of the season before slipping back in September, finishing one game behind Boston.

The Tigers got exactly what they needed from Doyle Alexander — and more — in the regular season, and that is why it was the best trade the Tigers ever made.