Collecting baseball cards is part of the joy of being a baseball fan. It’s different now, of course. You can plunk down $75 or $100 or whatever it is, and get the entire set of cards delivered right to your door via the Internet. Used to be you bought pack-after-pack-after-pack and hoped to fill in your set in piecemeal fashion. It was a quest. Good luck finding that rare Bruce Kimm card to finish off your 1977 Topps set.

Some of my favorite memories from my childhood involve my baseball card collection, which was jump started by my Uncle Bob, who gave me all of his cards when he turned 18 or so. A lot of collectors have a similar story: turn 18, go off to college, grow out of the foolishness of baseball cards.

But baseball cards aren’t foolish. For decades they were the lifeblood of baseball fans. In an era when you rarely saw the players of other teams (especially from different leagues), baseball cards were a way to see them up close. Hey, I didn’t know Steve Kemp had a mole there!

Baseball cards were important to us. They made it feel like we could hold a part of the game in our hands. Maybe you had or have some of the cards I list below. I think they’re some of the most important, attractive, and fun baseball cards in Detroit Tiger history. 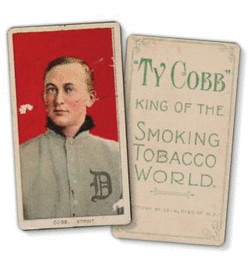 When this card was printed (before World War I), it was placed in tobacco pouches as a way to get people to buy more of the product. Often, the same image was used for years and years, with subtle changes like the background, name, etc. This card, from 1909, is one of the most valuable in the card collecting hobby.

Tobacco cards were not as popular in Cobb’s day as they would be decades later. It wasn’t until the early 1950s, when Topps issued their first full set, that cards were collected more seriously. The quality of cards improved greatly in the 1950s, and the photography and artwork were appealing.

In 1909, Cobb was only 22 years old when he had a great season for the Tigers, helping them to their third straight pennant. On the field, Ty was a fierce competitor who looked at the game as war. This card shows a softer side of Cobb, his collar turned up in southern gentleman fashion, his cheeks even looking rosy. 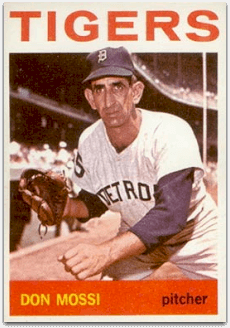 The Tiger left-hander gave new meaning to the phrase “keep your ear to the ground.” This card from the Topps 1964 set shows him in a posed follow through.

In spite of earning fame for his gigantic head ornaments, Mossi was a very good pitcher who pitched in 460 games in a twelve-year career spent with Cleveland, Detroit, the White Sox, and the A’s. Mossi won 101 games and saved 50 more.

His best season was probably 1959 when he went 17-9 and tossed three shutouts for the Tigers while logging 228 innings. Each time he hauled those big ears with him to the mound.

Imagine the ear hair, and then try to sleep tonight. 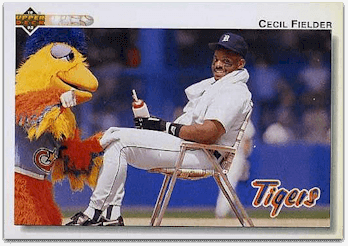 As far as I can tell, this is the only baseball card to ever feature a chicken, a lawn chair and a water bottle. It’s a great start to a picnic, but not what you usually see at the ballpark.

That’s the “Famous Chicken”, formerly known as “The San Diego Chicken,” doing his schtick with an amused Cecil Fielder at Tiger Stadium during a game in the early 1990s. This is a card from Upper Deck, who produced a number of attractive sets in that era. 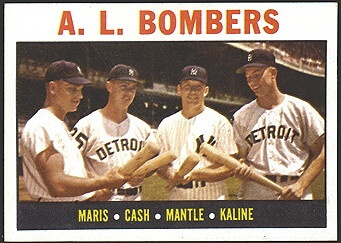 One of the best cards ever, this one is indicative of the trend toward special group cards in the 1960s. It’s too bad we don’t see these types of cards any more, it seems like the card companies don’t try to get players from separate teams to pose together.

This wonderful card is from the Topps 1964 set and it was taken at Yankee Stadium. It features four great players, still very much in their primes: Roger Maris, Norm Cash, Mickey Mantle, and Al Kaline.

Special note: The photo for this card was actually taken in 1962 at Yankee Stadium, the year after Maris and Mantle challenged Babe Ruth’s single-season homer record, Kaline had one of his best years, and Cash won the batting title. 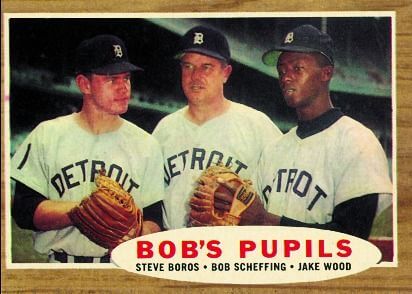 Here’s another group card, which I love.

Jake Wood was the first black player to come out of the Detroit farm system and make it as a regular on the big league club. The Tigers didn’t integrate until 11 years after Jackie Robinson broke the color barrier in 1947. Wood was a decent ballplayer who was also very popular with fans in Detroit.

That’s manager Bob Scheffing in the middle, and Detroit native Steve Boros on the left. Boros and Wood were two prized prospects in the early 1960s but only Wood delivered in that promise. Boros went on to become a long-time big league manager.

The trio are in their road uniforms and based on the facade in the background, this image was snapped at Yankee Stadium in New York. 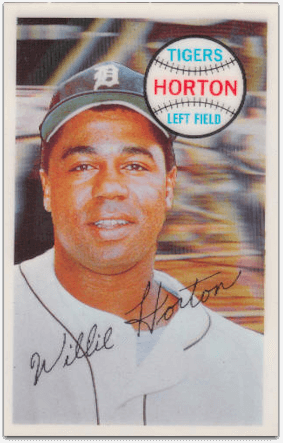 The Kellogg’s Cereal Company issued several sets of cards in the 1970s and 1980s. You can’t tell so much here on 2D Internet, but this is a 3D baseball card. The joy was twisting and turning these cards so you could see the 3D vantage points built into the card surface.

Another great feature of the Kellogg’s cards was the replica player autographs that were printed on the front.

The Kellogg’s cards were famous for bending or curling up as they aged. While they were available throughout the United States, they were trial tested in Michigan (Kellogg’s being based in Battle Creek), which means there are many of these cards in the state.

I collected a lot of these cards over the years and cherish them all. When I see them I’m transported back to the 1970s, the cards seem to be a perfect representation of that era.

Horton played for the Tigers from 1963 until he was traded early in the 1977 season. One of my favorite images from the final game at Tiger Stadium is Horton standing in left field during the post-game ceremony crying as he received an ovation from the Detroit fans. 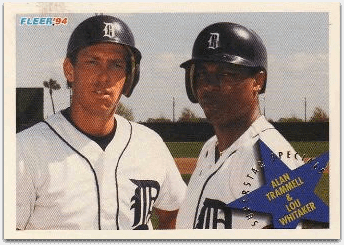 No list would be complete without these two. I think there were only two cards that ever featured the double play duo together. This one was issued by Fleer in the late 1980s.

The other Tram/Lou card was a more polished posed photo of the duo in a studio wearing their orange batting practice jerseys in the mid-1990s.

These two Tigers played more games as teammates than any pair in baseball history, while also turning more double plays than any other partners at short and second. 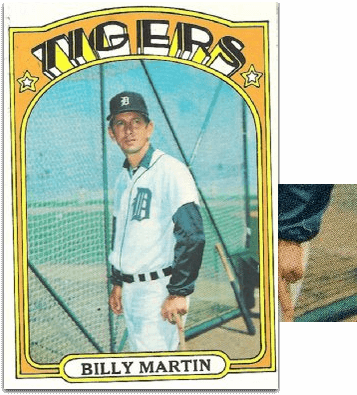 One of most famous cards in history, in this one, Detroit manager Billy Martin is letting the photographer know how he feels about posing for his card. This stunt didn’t go over real well with the Detroit front office. 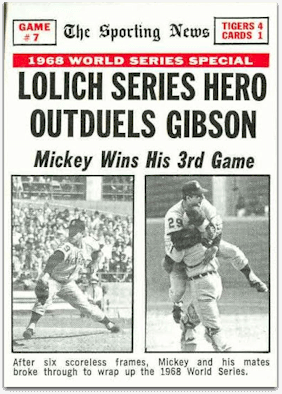 Probably the most iconic image in the history of the Detroit Tigers is Mickey Lolich in the arms of catcher Bill Freehan after the final out of the 1968 World Series. This card, which is one of eight celebrating the ’68 Series, is from the Topps 1969 set. 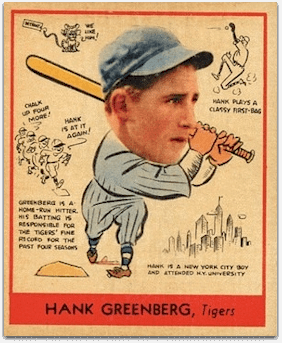 Don’t you love the way these cards were put together in the 1930s? That’s quite an impressive upper body on Hank Greenberg.