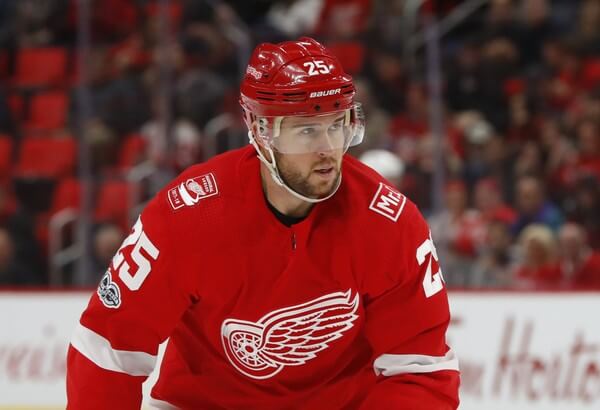 Mike Green was the only Red Wings selected to the NHL All-Star Game in 2018.

Watching the NHL All-Star Game skills competition is always fun. It’s the best All-Star Game side-show in all of sports … and that’s coming from a baseball-first fan.

In fact, not only is the NHL skills competition more fun to watch than the home run derby, it’s also better than the NBA’s slam dunk contest (for the last ten years or so), the 3-point shooting contest, the Pro Bowl and the actual NHL and NBA All-Star games. The MLB All-Star Game is the only thing that beats the skills competition.

But if you were watching the skills competition this past weekend, the only player in a Detroit Red Wings uniform was defenseman Mike Green.

We’re a long way from watching Sergei Fedorov compete in the fastest skater or even watching Pavel Datsyuk show off one of his many incredible skills.

The fact is, the Red Wings have been in a rut the past few years. They missed the playoffs last year, but also have been barely in the playoffs for several seasons.

It’s starting to show with their All-Star selections.

For years, the Red Wings were one of the most represented teams in the game and the skills competition.

Going back into the glory days of the 1990s, you can find All-Stars in bunches. In 1998 it was Lidström, Shanahan, Igor Larionov and Viacheslav Fetisov. In 1996, it was Lidström, Fedorov, Chris Osgood and Paul Coffey, again with Bowman as coach.

Back in the Gordie Howe days, the Red Wings were pretty well represented, too. In 1965 there were six as Howe, Sid Abel, Alex Delvecchio, Bill Gadsby, Marcel Pronovost and Norm Ullman all were selected. In 1963 it was again six with Abel, Delvecchio, Howe, Pronovost, Ullman and goalie Terry Sawchuk. Back in 1957 the Wings had six All-Stars with Delvecchio, Glenn Hall, Howe, Red Kelly, Ted Lindsay and Pronovost.

Prior to that, the entire Red Wings team was selected a few times in the 1950s when the All-Star Game was in its infancy. The Red Wings, after winning the Stanley Cup, would face a team of All-Stars. That would have been fantastic to watch.

Of course there were some light years in the 1970s and 1980s when the Red Wings weren’t very good. You might see Yzerman alone or Red Berenson or John Ogrodnick. Reed Larson made it three years in a row.

We find ourselves in another one of those lean stretches, and unless there are some changes made, it’s going to go on for a while.

The Red Wings have had a solo All-Star just six times since 1970, but they have all been since 2007, including the last four years in a row.
Green was the only selection this year. Last year it was Frans Nielsen. In 2016, it was Dylan Larkin, who seemed poised as a rookie to make the All-Star Game an every-year thing for himself.

In 2015, it was goalie Jimmy Howard, who made the team for the second time in a row, though it was three years apart. The NHL took a year off from the game for the Olympic year after missing the prior year because of a lockout.

Gone are the long runs of selections by Yzerman, Shanahan, Lidström and Datsyuk. Henrik Zetterberg and Howard are the only players on the Detroit roster to have ever played in as many as two All-Star Games.

The All-Star Game itself doesn’t mean much. But it is a reflection on how each team is doing and what kind of stars they are producing. The past two years, it has been difficult to determine who should be an All-Star from the Red Wings. That should never be the case for any team, let alone one of the most decorated franchises in the history of sports.

Hopefully, in future years we will see multiple Red Wings jerseys competing in the skills competition and All-Star Game. It might give fans hope that there are still elite skills remaining on the Red Wings.