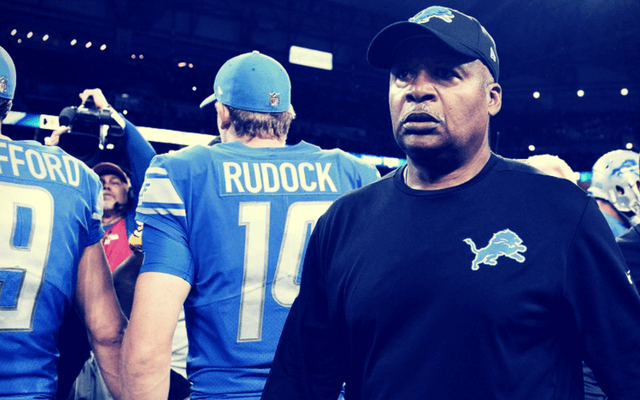 The Lions (3-4) did the only thing that they know how to do Sunday night vs. the Pittsburgh Steelers (6-2): Blow a game they should have won.

The 20-15 loss to the AFC North-leading Steelers has incited a ton of outcry from Lions fans, and has even caused a large sect of them to declare the 2017 Lions as the “Same Old Lions.”

Can you blame them? I say hell no.

Just take a look at how the Lions lost, and you’ll see why fans have every right in the world to refer to them in such a negative manner.

For starters, Matthew Stafford and the Lions failed to score a single touchdown, despite recording 482 yards and making five trips to the red zone.

It was the third-most yards accumulated by an offense without scoring a touchdown in NFL history. At least, though, Detroit head coach Jim Caldwell had a reliable kicker to turn to in Matt Prater, who was 5-of-5 on field goal attempts against the Steelers.

Maybe Lions general manager Bob Quinn somehow knew his team, which was tied for fifth in the NFL with a 60 percent touchdown rate in the red zone going into Week 8, would direly need Prater Sunday when he decided to reward him with a three-year contract extension last week.

It’s just too bad that Caldwell and Lions playcaller Jim Bob Cooter never realized how important Prater was to making up for Detroit’s TD ineptitude inside the red zone vs. the Steelers.

Caldwell & Co. twice made the call to go for it on fourth down inside the Steelers’ 10-yard line (in the third quarter voluntarily and on the last possession of the game as a necessity because of the third-quarter decision backfiring). On both occasions, the Lions turned it over on downs.

To add insult to injury, with the loss, the Lions became the first team in NFL history to gain at least 475 yards of offense, not record multiple turnovers (lone turnover came on a Golden Tate fumble) and still score under 20 points, according to ProFootballTalk.

It was an utterly embarrassing performance, yet one that was also Lions-esque.

It’s become commonplace for the Lions to lay an egg in the NBC-era of Sunday Night Football.

The Lions, losers of three in a row, have gone from a sexy pick to win the NFC North, to a team that trails the Case Keenum-led Minnesota Vikings (6-2) for first place and is only a half-game ahead of the last-place Chicago Bears (3-5).

Keenum, who had a highly underwhelming TD/INT ratio of 0.8/1 with 9 touchdown passes and 11 interceptions in 10 games with the Los Angeles Rams last season, is the third-best QB on the Vikings’ roster.

The other team ahead of the Lions in the NFC North are the Brett Hundley-led Green Bay Packers (4-3), which the Lions will play next week on Monday Night Football.

Yes, the Hundley-led Packers are ahead of the Lions. Not the Aaron Rodgers-led Packers.

That’s a problem in itself.

Yet, to be fair to the Lions, the Pack have only played one full game with Hundley at QB since Rodgers went down with a likely season-ending collarbone injury.

In that game in Week 7 vs. the Saints, Hundley, a former UCLA passer, only completed 12 passes for less than 50 percent passing. His stat line also included 87 yards, a dismal 3.48 yards per pass attempt (lowest yards per pass attempt recorded by a Packers QB since Brett Favre in 2003), an interception and no passing touchdowns.

Hundley did score on the ground from 14 yards out for his first ever rushing TD. However, it doesn’t take a rocket scientist to realize still that he didn’t have a good day at the office against the Saints.

And it also doesn’t take a rocket scientist to realize that the Lions are falling fast.

If they want to have any chance at salvaging their season, they have to beat the Packers.

No excuses for the Lions. If they’re a team that is really capable of making the playoffs, they will beat the Packers at Lambeau Field on Monday night.