Family and Michigan have always been important to Gibby 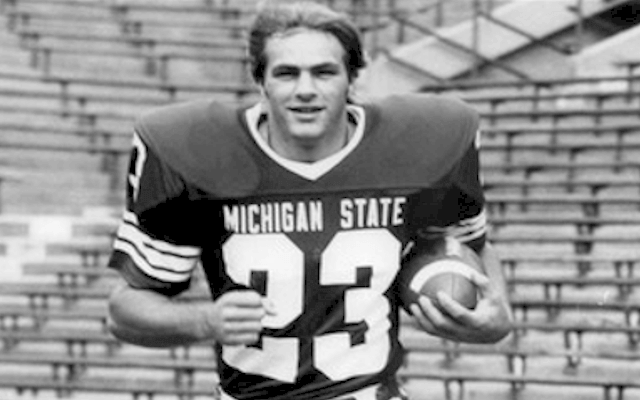 As a collegiate football player, Kirk Gibson was an All-American wide receiver for Michigan State University.

Kirk Gibson, the former Detroit Tiger star, has become synonymous with the state of Michigan.

The great irony is that he never particularly liked baseball as a kid growing up. In fact, he dreaded the moments when his dad would invite him out to the backyard to play catch.

At Waterford-Kettering High School, he played baseball, football, basketball, and ran track. But there was never any doubt in his mind which sport he loved most. The man who would one day hit perhaps the most famous home run in Detroit Tiger history had always felt most at home on the gridiron.

Gibson’s father, however, encouraged him to focus more on baseball. He was a natural athlete, a skinny, big-boned kid who could outrun anybody. He played American Legion baseball for a couple of summers, and even hit a game-winning homer to advance his team to the championship round. But when Michigan State University offered him a football scholarship, Gibson jumped at the chance.

It looked to be the end of his baseball-playing days.

Gibson had his eyes on the NFL.

Upon learning that he’d won a job as the starting flanker in his freshman year, the first thing he did was to call his parents on the phone with the good news. That should come as no surprise. For Gibson, family always was most important. In the meantime, his father kept urging him to give baseball a try.

In his junior year at MSU, he somewhat reluctantly tried out for the baseball team. He made the squad, and, to his surprise, found that he liked playing the game more than he ever had before.

Maybe his old man had been right all along.

Gibson starred on the diamond for the Spartans, exhibiting the raw power and blazing speed that would be his trademark. Scouts began to pay attention, which in turn got Gibson’s attention. If all these guys were interested in him, he figured, maybe he might be able to make a good career playing baseball. He also reasoned that the average life span of a professional football player was much shorter. A longer career meant more money.

Gibson, no dummy even as a college boy, began to see how baseball could butter his bread.

Two of the guys who were interested in him were Detroit Tiger General Manager Jim Campbell and his assistant Bill Lajoie. Lajoie invited Gibson to come down to Tiger Stadium and take a round of batting practice. After watching Gibson deposit a few blasts in the right field seats, the Tigers figured they had their man.

On June 6, 1978, the Bengals selected Gibson, the hometown boy, with the 12th pick in the amateur draft. He’d gone down to the corner of Michigan and Trumbull to watch the Tigers once or twice a year every summer when he was a kid. All his life, he’d followed the team. They were the only major league club he wanted to sign with. Now, if all went according to plan, he’d be calling Tiger Stadium home in a few years.

He returned to East Lansing to finish out his final football season, which meant a lot to him. He helped the Spartans to an 8-3 record, including a big win over Michigan, and won All-America honors in both football and baseball. “With his golden hair that tumbles down all around his head,” wrote Free Press columnist Joe Falls, “he looks like a young Viking warrior.” 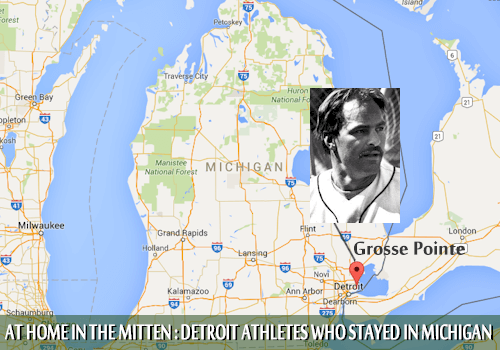 For Gibson, it was important to be able to stay close to home, to maintain his Michigan roots. That’s what made being drafted by the Tigers so special for him. Things didn’t always go smoothly for him early on in his career, and the pressure was made worse when his manager Sparky Anderson dubbed him “The Next Mickey Mantle.” When he struggled, he heard the scattered boos reign down on him at Tiger Stadium. No player wants to be the target of fans’ wrath, but especially in his hometown.

But he came into his own in 1984, along with the rest of the team. His World Series home run off Rich Gossage still sends “Goose” bumps (pun intended) through Tiger fans when they watch it today. Gibson’s arms are forever raised, his fists forever clenched, his mouth in perpetual growl, in a triumphant freeze frame that has become a symbol of a celebratory Motor City. And how appropriate that it was Gibson, the made-in-Michigan man, who became our collective poster-boy for that giddy October night? We love Trammell, we marvel at Whitaker, but only Gibson could rightfully have hit that home run.

Gibson loves the state of Michigan, and always has. A fan of the great outdoors, it was his natural environment from the beginning, whether fishing, horseback riding, boating, or duck hunting with his Golden Retrievers. The cool waters of the Great Lakes run through Gibson’s blood.

Even after a bitter parting of the ways with the Tigers following the 1987 season, even after an MVP-winning campaign with the Los Angeles Dodgers, and a storybook World Series home run that would have been rejected by any reputable Hollywood studio, Gibson still knew that the Wolverine State was his real home.

The prodigal son returned as a free agent to the Motor City for three final seasons beginning in 1993. Now older, wiser (and considerably balder), he was back with Tram, Whitaker, and Sparky, a reunion of heroes from glories past.

Back in Michigan once again.

“I want to stay in this organization,” he said at the time. “Contrary to popular belief among parts of the country, I happen to think Detroit is a pretty good place to live. I want to be part of all this, part of Detroit, for a long time.”

When he finally hung up his spikes for good following the 1995 season, he joked, “I’ve been traded to my family.”

Since his retirement as a player, Gibson has indeed spent most of his time in Michigan. He worked as a color analyst for Tiger television broadcasts for several years, until Trammell (the Tiger manager at the time) chose him to be his bench coach in 2003. After a successful managerial stint with the Arizona Diamondbacks, which included a division title in 2011, his career came full circle when he made his way back to Michigan to resume duties as a Tiger color analyst.

Shortly after, however, Gibson made the announcement that he was battling Parkinson’s disease, a neurological disorder that affects motor skills. Gibson is determined not to go down without a fight. He continues to work diligently with movement and speech therapists. “It’s not a death sentence,” he insists.

After a brief absence from the TV booth, Gibson was back late this summer calling Tiger games. Back where he belonged.

And the Gibson family baseball roots continue to grow deeper. Kirk’s son, Cameron, who also played at Michigan State, was drafted by the Tigers in the fifth round of the 2015 MLB draft.

Who knows? He may be tearing up the bases in a Tiger uniform one day.