Gates Brown was the first designated hitter for the Tigers 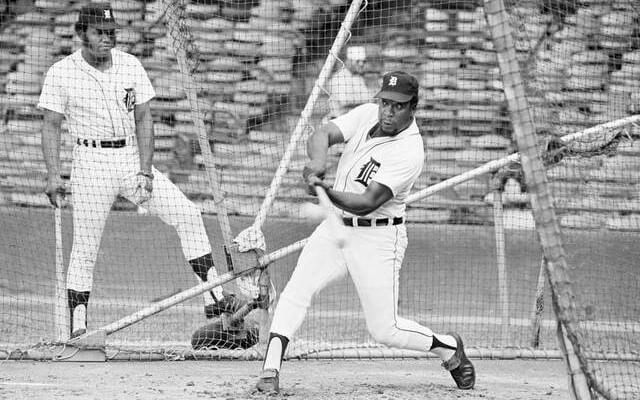 The designated hitter is always a hot-button issue among baseball fans.

It started as an “experiment” in 1973, designed to boost sagging offense and lagging attendance in the American League.

Nevertheless, the DH has endured, for better or worse. It has become ingrained into the very fabric of Organized Baseball, and has taken root at every level of competition and on every continent where the great game is played.

The National League remains the lone holdout, a heaven on earth for fans who love to see pitchers flail at three straight fastballs down the middle. Do you get all excited at the prospect of the manager traipsing out to the umpire to make a double-switch? Then the senior circuit is the game for you.

People weren’t sure what to make of the designated hitter when it first burst onto the American League scene. For many purists, it smacked of gimmickry, a slap in the face to tradition. Those notions persist even today, so nothing has really changed.

The first Tigers player to appear in a regular-season major league game as a designated hitter was Gates Brown. The man known as the “Gator” was ideal for the duty: He had never been an adequate fielder, and, just short of his 34th birthday, he had virtually no foot speed left. He could always hit, however, and his 5’11” 220-pound frame still generated some power.

After a career spent mostly as a pinch-hitter, Brown found himself penciled into the lineup as the designated hitter just about every day in 1973. He played in a career-high 125 games (118 at DH), only the third time he had ever topped the 100 mark. While he hit a mere .236, the lefty swinger clubbed 12 home runs, the second-highest total of his career. His WAR was only -0.2, which meant the Tigers would have been better off with any Triple A player instead.

Brown etched his name in Tigers history on the afternoon of Saturday, April 7, opening day in Cleveland. Less than a month earlier, The Godfather had made its theatrical release. Topping the Billboard charts was “The Night the Lights Went Out in Georgia.” Many breakfast eaters were still wondering what this newfangled concoction called the Egg McMuffin was. Tigers’ manager Billy Martin had Brown batting in the third slot, sandwiched between Al Kaline, the right fielder, and first baseman Norm Cash.

Facing the Tigers was the Indians’ reigning Cy Young winner, future Hall of Famer, and resident greaseballer, Gaylord Perry. Brown usually hit him pretty well. For the Tigers, it would be Mickey Lolich, seeking his sixth career opening day victory.

After two groundouts, Brown came up to bat in the first inning. All he could manage against Perry was a weak fly ball to Rusty Torres in right field. All day long, in fact, Perry used the Vaseline to great advantage, wiping his fingers on his hat, his pants, his belt, his crotch, anywhere on his person a foreign substance might be concealed. He went the distance while holding Detroit to only four hits. Tigers second baseman Dick McAuliffe was not amused by Perry’s antics. “They ought to make him take all his clothes off,” he vented after the game. “his hat, his uniform, his underwear, everything. He’s got the stuff hidden somewhere. The umpires should take him off the field and make him strip. It’s an absolute joke what they let him get away with out there.”

Lolich was equally impressive. After a two-run home run by Chris Chambliss in the opening frame, he gave up only three hits the rest of the way. The Indians won, 2-1, before 74,420. It was the largest opening day crowd in Cleveland history,

Brown went hitless in four at-bats. The next day, however, he collected the first base hit ever by a Tigers DH, in the second-inning off Dick Tidrow. Two frames later, he became the first Tigers DH to drive in a run. On April 20 in Baltimore, he blasted the first home run by a Detroit designated hitter. It came off a pitcher that Tigers fans would become very familiar with nearly 15 years later: Doyle Alexander.