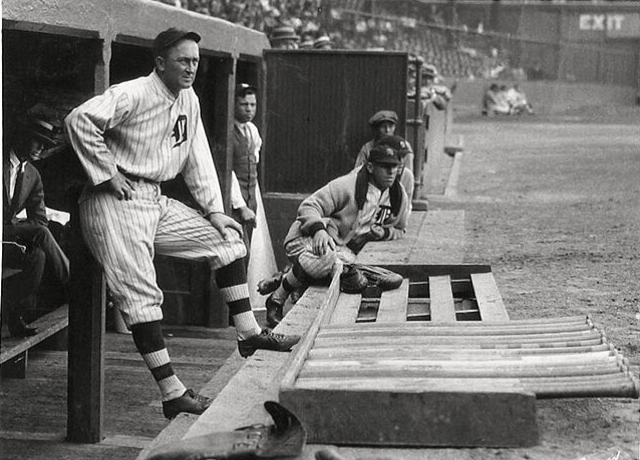 Manager Ty Cobb observes his team in action at Navin Field in Detroit, circa 1923.

When Ty Cobb was named manager of the Tigers before the 1921 season, it was a decision applauded by experts in the baseball world. The Sporting News, the self-described “Bible of Baseball,” wrote:

Detroit has turned to their famed batting champion to build a flag-winner in the American League. Who better? Terrible Ty knows the circuit better than any man, he can recite the names and favored pitches of every tosser and describe the batting habits of every batter in the loop. With his unmatched guidance, the Ty-gers future looks brighter than it did yesterday.

The future looked bright for Detroit, but ultimately in his six seasons as player/manager, Cobb failed to capture a flag. While others, namely his rival Tris Speaker and the so-called “Right-Handed Ty Cobb,” Rogers Hornsby, won titles in the dual role, the pennant escaped The Peach. His only success at the helm of a team came as a hitting mentor. His pupils battered the baseball better than any team in the game, and several also-rans became batting title contenders under his watchful eye in the batting cage.

“Honestly, I could teach hitting,” Cobb once explained modestly.

But there are three parts to a baseball game: hitting, pitching, and fielding, and Detroit couldn’t do the two last parts all that well under Cobb. That’s why they averaged 79 wins in his six seasons as their player/manager. And that’s why Detroit didn’t flinch when Ty announced his retirement following the 1926 season.

Cobb’s greatest success came with his hitting pupils, but his oddest idiosyncrasy was his habits with his pitchers. Ty didn’t like pitchers, frankly he thought they were dopes. “A pitcher can be outfoxed with simple tactics,” Ty told his biographer years later. For Cobb, a pitcher deserved little respect, and mostly scorn. He felt he needed to despise pitchers in order to defeat them. But as manager he was in a position where he had to motivate his pitchers to succeed. Predictably, he found it a difficult task.

Most pitchers who played for Cobb hated his guts. That’s because the Detroit manager had little patience with them and he certainly had no intention to coddle their egos. “The only time [Cobb] talked to me in the three years I pitched for him was when I didn’t complete my game, and that was to yell at me,” pitcher Herman Pillette said. Others, like Dutch Leonard, were insubordinate to Cobb and argued with him whenever he came to the mound. Those meetings on the mound were epic during the Cobb years.

Like all player/managers, Cobb was running his team from his position on the field, in his case center field. From there, his biggest pet peeve was watching his pitcher throw pitches out of the strike zone. His shrill voice would fill the air with expletives as he hollered at a nervous pitcher to “Get the damn ball over the plate!” If that didn’t work, Ty would start his famous stall tactics, which became notorious in the American League.

“We can’t let that SOB take charge of the events every game,” Washington Senators owner Clark Griffith complained after a grueling series against Detroit in D.C. in 1926. “His slow-poke tactics tick off the players, the umpires, and the fans.”

Griffith was speaking of Cobb’s incessant visits to the mound during a doubleheader that took more than five hours, a long time in those days. When Cobb’s pitchers started getting into trouble, he would walk to the mound ever so slowly from center field, lamenting his bad fortune the entire way. In those days there were no hard rules about visits to the mound, and no restrictions on stoppage in play for defensive adjustments. The Detroit manager was known to trot in to discuss defensive positioning with his infielders, to the exhausted frustration of the opposition. During the Washington series, opposing manager Bucky Harris was expelled from the game after confronting the umpires during a Cobb stall session.

His pitchers hated Cobb’s in-game histrionics, and rightly so. His interruptions (and constant barking from center field) were annoying and halted their in-game momentum. During Cobb’s tenure as Tigers’ skipper, the team finished in the bottom half of the league in earned run average every season.

“Cobb didn’t understand pitching,” lefty Bert Cole said, “and he thought his screaming and yelling would make us better. It just made most pitchers nervous.”

After his unsuccessful tenure as manager, Cobb’s retirement didn’t stick, and he came back to play two final seasons with the Athletics. He never again managed a team, and he didn’t miss it.

“I didn’t have the temperament to deal with players who weren’t as committed to excellence as I was,” Cobb explained years later.