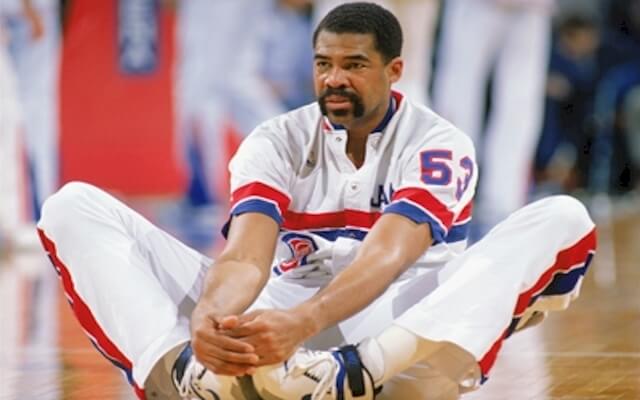 James Edwards won NBA titles with the Detroit Pistons in 1989 and 1990.

Stoic James Edwards played 1,168 games in the National Basketball Association, the most ever by a player who was never an all-star. But Edwards was a star in the eyes of Detroit Piston fans as a key cog in two NBA title teams.

The man they called “Buddha” arrived in Detroit just in time to join the championship rotation for coach Chuck Daly, becoming a Piston on February 24, 1988 from the Suns. Quick: who did Detroit give up to get Edwards in that trade? You can’t tell me, can you? It was Ron Moore, a rookie who saw action in only nine games for Daly and the Pistons that season. Moore was one of those guys who was only in the NBA because he happened to have the genes that made him seven-feet tall.

Edwards was seven-feet tall too, but he had honed skills that NBA coaches loved. His patented move was the fade away jumper from six-to-eight feet from the hoop, a shot that was impossible to block. The only way to disrupt the Edwards fade away was to pound him physically. But Edwards was no Chuck Nevitt (a rail-thin 7’2 center who played briefly for the Pistons in the 1980s). He had massive shoulders and a tree-trunk type body. He could bump and grind in the lane and his long arms allowed him to pull down rebounds. For a team like Detroit who emphasized defense first, it was also important that Edwards could play post defense. His only real weaknesses were his speed and his free throw shooting, which was just average.

Still, Edwards gave Pistons’ general manager Jack McCloskey a low post scorer that he craved. In 1987-88, as Detroit poised themselves to finally get past their nemesis in the East, the Boston Celtics, Daly and McCloskey knew they needed more points from inside. The two players who spent most of the time at center before Edwards arrived were Bill Laimbeer and John Salley. The former was a textbook interior defender and rebounder, but he did not have an offensive game. Most of Bad Bill’s points came from put backs or mid-to-long range jumpers. The Pistons often tried to pull the opposing center out to the perimeter to chase Laimbeer. As for the 6’11 Salley, he was a favorite whipping boy for Daly, who often became exasperated with John’s deficiencies on the floor. Salley was working with the coaching staff to develop a back-to-the-basket game, but it was going slow, and the second year player was known more for his shot blocking than offensive acumen.

Edwards was happy to be in Detroit too. When the deal was made sending him from Phoenix to the Pistons, the Suns had lost 11 straight games. But overnight, Edwards joined a first place team favored by many to get to the NBA Finals. There was some adjustments for Edwards though. In Phoenix, the big guy had gotten the ball a lot, averaging 12 shots and 32 minutes per game. In his first nine games in the red-white-and-blue of the Pistons, Edwards averaged 12 minutes and four shots per game.

“He’ll have to get into the scheme of what we’re doing,” Daly said. “And frankly, we need to make some adjustments to get him the ball down in the paint.”

While Detroit fans certainly noticed Edwards over the last two months of the regular season, it was in the playoffs against the hated Celtics that the new big man first made himself a fan favorite. In Game Six of the Eastern Conference Finals on June 3, Edwards came off the bench and poured in 15 points in 25 minutes as the Pistons finally slayed their dragon, eliminating Boston to advance to the NBA Finals. Neither Robert Parish nor Kevin McHale could cool off #53 as he flipped his fade away over their outstretched arms to help the team to a 95-90 win at the Silverdome.

Edwards had a surly facial expression that belied his friendly personality. He was tough and physical, but he also had the finesse and agility to show off his fade away shot, which came off his hands as a line drive. In Detroit he quickly became a popular member of the team, fitting in well with the Bad Boys. And his presence made opposing teams change their tactics. Previously, the Pistons primary scoring punch had come from their talented backcourt trio of Isiah Thomas, Joe Dumars, and Vinnie Johnson. But with Edwards on the floor, teams had to be wary of his ability to demand the ball down low, dribble, turn, and score.

In his four seasons with the Pistons, Edwards played in 74 playoff games, and he seemed to save his best performances for the biggest stage. In 1989 he had his best games against the Bulls in the Conference Finals as the Pistons came back from a 2-1 deficit to once again shove aside Chicago. In 1990 Daly used Edwards as a starter and in the playoffs his minutes increased, which was a big reason the team repeated as champions. He scored a career postseason high 32 points in Detroit’s Game Two win over the Knicks. In that series Buddha was matched against Patrick Ewing and averaged 19 points per game. In the NBA Finals against Portland, he averaged 14 points in the five-game triumph.

Edwards added a third ring with the Bulls as an end-of-the-bench veteran presence, but by that time he was 40 years old and his trademark fu manchu mustache was tinted in white.

In all, Edwards played 19 seasons, a remarkably long career for a big man who was selected in the third round (by the Lakers in 1977). He played for eight teams, not because he was expendable, but because he was a valuable asset: a big man who could create his own shot. His most prolific scoring years came with Indiana, where started and averaged 15.9 points per game. In Detroit as a member of a two or three man front court rotation, Edwards averaged 11.2 per game and cemented himself as one of Detroit’s most popular athletes.