The Joe should have gone out with playoff excitement 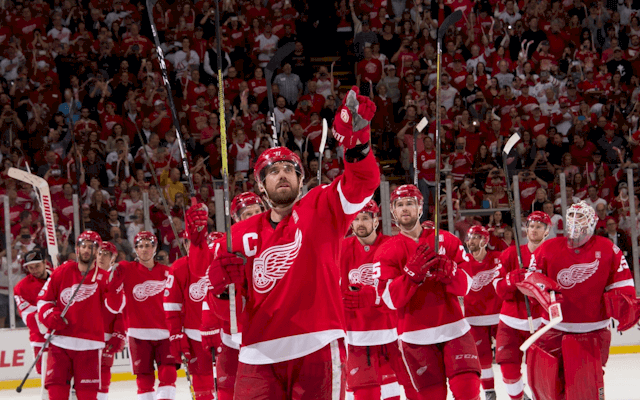 As the final octopi flew onto the ice at Joe Louis Arena on Sunday, the moments of celebration couldn’t help but feel a little bit empty.

Yes, the The Joe has seen many wonderful moments.

Yes, dozens of Detroit Red Wings Legends were in attendance to say goodbye.

Yes, there was a spirited vibe from the fans remembering everything that was accomplished here.

But the final game felt a little empty because due to the contrast between all of those accomplishments and the finality of this season.

The Joe has been the site of some of the greatest hockey moments and iconic Detroit moments in history. And in this final season in the arena, it just happened to be a year that owner Mike Ilitch died, where we lost Mr. Hockey Gordie Howe less than a year ago — and the year that the Red Wings 25-year playoff streak was snapped.

The Joe shouldn’t have its final game during the regular season. With all the playoff moments over a quarter-century and beyond, the final game should have been a playoff game.

But just like old Yankee Stadium, The Joe met its end during one of the disappointing seasons in franchise history. Yankee Stadium was packed with World Series memories of Babe Ruth, Mickey Mantle, Joe DiMaggio, Yogi Berra, Derek Jeter and Mariano Rivera. It’s end should have been in the World Series or at least the somewhere in the postseason — with that electric playoff atmosphere. But it ended with a meaningless regular season game in September nine years ago.

The same is true of the Joe. With all the legendary feats of Howe, Steve Yzerman, Brett Hull, Pavel Datsyuk, Nicklas Lidstrom, Vladimir Konstantinov and Henrik Zetterberg, Joe Louis Arena should see its end in the Stanley Cup Playoffs.

The added excitement of every game in the postseason possibly being the last at The Joe would push the atmosphere that was already electric all the way to a fever pitch.

But instead the end is known and the end was disappointing. It was a wonderful celebration of history on Sunday and The Joe will be missed — but even more so knowing that the final season ended with a “What if?”