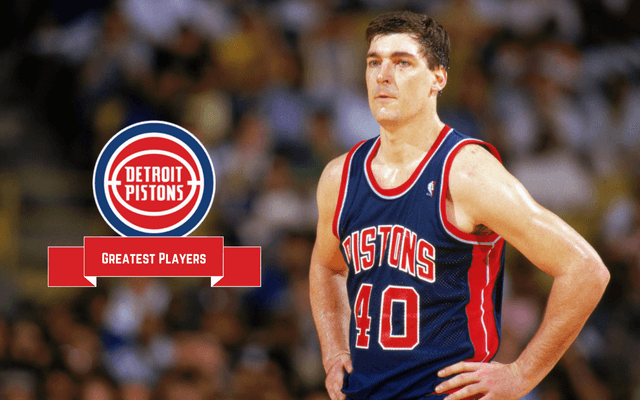 Move aside Ben Wallace, and make room for Bill Laimbeer atop the Detroit Pistons’ Mount Rushmore of franchise greats.

Laimbeer, like “Big Ben,” is one of the most iconic Pistons of all-time. But Laimbeer, not Big Ben, is the greatest Pistons center to ever play on at least one of the franchise’s three championship teams.

Why, you may ask?

It’s because he could rebound as well as Big Ben, and could easily outshoot the athletic big man from long distance.

Both averaged over nine and a half rebounds per game during their careers (9.6 for Wallace and 9.7 for Laimbeer). However, Big Ben couldn’t shoot from downtown to save his life. In fact, he shot a dismal 14.3 percent from three-point range during his two stints and nine total seasons with the Pistons.

It was a different story with Laimbeer, whom the Pistons acquired from the Cleveland Cavaliers in February of 1982.

While not as highly impressive as a guard who shoots at least 40 percent from deep over the course of his career (i.e. Golden State’s Steph Curry), it still provides statistical evidence of how Laimbeer had a nice stroke from 3.

Laimbeer also did it during an era when big men shooting three pointers was unusual and far from sexy.

When “Bad Bill” was suiting up for the Pistons. there were very few “bigs” with consistent strokes from three-point land, like the Rockets’ Ryan Anderson and the Mavericks’ Dirk Nowitzki in today’s game.

On top of that, unlike Anderson and Nowitzki, Laimbeer was willing to assert himself defensively and to play “dirty” when necessary.

Or to put it more accurately, Laimbeer played dirty whenever he felt like it. And as Detroit fans know, that was more often than not.

The willingness to play tough was what made Laimbeer one of the ring leaders of the Bad Boy Pistons. If anyone went after one of his teammates, such as guards Joe Dumars and Isiah Thomas, you better believe that he was going to make the perpetrator pay.

And when I say “pay,” I mean knocking the opposing player on his ass with no hesitation.

He was always willing to get “T’ed-up” in order to defend his teammates, or to successfully do another thing: to get inside the heads of his opponents.

It was as big of a mental game as it was a physical game for Laimbeer. Just ask Robert Parish and Larry Bird, among countless others who felt the wrath of Laimbeer’s elbows during his days as the NBA’s super villain.

Parish, after getting fed up with Laimbeer’s antics, famously punched the Detroit center in the closing seconds of the first half of Game Five of the 1987 Eastern Conference Finals.

“Bill [Laimbeer] always crossed the line…I had enough of all the dirty play,” Parish said in a 2012 interview with Massachusetts-based sports network NESN. “It was the first and only time I ever lost my composure during a game.”

Many other NBA players, including Atlanta Hawks legend Dominique Wilkins, also lost their composure because of mind games deployed by Laimbeer, a man who was once labeled as the “Darth Vader of the NBA” by the Los Angeles Times.

As Wilkins said during the ESPN 30 for 30 documentary on the Bad Boy Pistons, “You were so mad at him (Laimbeer), that you were off your game.”

Laimbeer also helped throw Chicago Bulls icon Scottie Pippen off his game leading into Game Seven of the 1990 Eastern Conference Finals. All the pushing and shoving and hard fouls committed by Laimbeer and his Bad Boy counterparts caught up with Pippen, and it caught up with him to the point that he had nothing left to give mentally or physically for Game Seven. Michael Jordan’s famous sidekick developed a migraine headache prior to the game that limited him to 1-of-10 shooting from the field and two points in the Pistons’ 93-74 blowout victory.

Those examples of Laimbeer’s Darth Vader-like mind tricks exemplify why he was as big a leader for “The Bad Boys” as was Isiah.

Laimbeer should be recognized as the greatest center to ever win a championship in Detroit, despite Big Ben’s four Defensive Player of the Year awards and NBA championship with the 2004 Pistons.