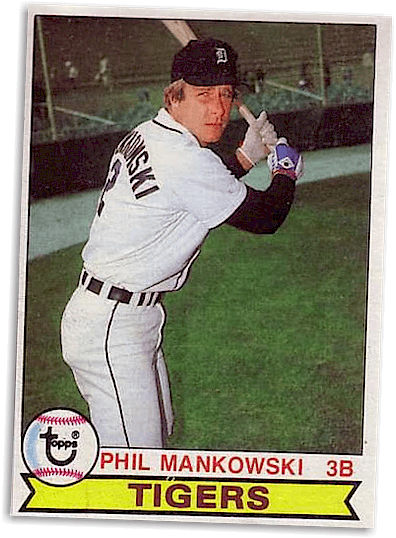 It was the first opening day for Alan Trammell and Lou Whitaker. The first of 18 they shared together as teammates.

It was also the return of Mark “The Bird” Fidrych, who had missed most of the ’77 season with an arm injury.

But of all the Tigers who enjoyed opening day in 1978, third baseman Phil Mankowksi was the most thrilled. It proved to be the most memorable game of his career.

Eight years had passed since the Tigers drafted Mankowski out of high school in Buffalo, New York. But he’d only played 118 games in the major leagues when he reported for spring training. Eight years is a long time for a prospect to stick in one organization without something happening. Either the player gets a chance to play regularly in the big leagues or he’s traded to a team where he can get that chance.

Mankowski was stuck in the Detroit organization, hopelessly blocked by third baseman Aurelio Rodriguez. While Rodriguez was never much of an offensive threat, he was one of the best glove men at the hot corner and possessed one of the best throwing arms in baseball. Mankowski finally got a cup of coffee with the Tigers in 1976 at the tail end of the season and in ’77 he made the club out of spring training as Rodriguez’s understudy and played a long stretch after Aurelio was injured. That year, “Manko” appeared in 94 games and was consistent, though not spectacular. Still, some in the organization felt his lefthanded swing  would lead to some good numbers in the big leagues.

His performance with the bat in Lakeland in ’78 impressed the coaching staff enough that manager Ralph Houk announced he would start the season with a platoon arrangement at third base. The decision delighted Mankowski and didn’t bother Rodriguez, who had been around long enough to know things could change quickly.

“I don’t mind it [because] I know it’s best for the team,” Rodriguez said. “I will help my team when I am asked.”

On April 7, the Tigers welcomed the Blue Jays to Tiger Stadium to open the season. The old ballpark was packed. The big story of the day was Fidrych, the ’76 Rookie of the Year making his return after missing the final three months of the previous season with shoulder problems. Opening Day in Detroit guaranteed a standing-room crowd, but Fidyrch, known as “The Bird” for his on-field antics, ensured that they would be vocal and charged.

Fidrych cruised in the first inning with three ground outs, one of them going to Mankowski at third base. In Detroit’s half of the inning, Mankowski batted second, directly behind Ron LeFlore, who was taking a big lead of first after reaching on a walk. Phil tapped a pitch to the left of pitcher Dave Lemanczyk, far enough from the mound that the Toronto pitcher was forced to toss the ball to first, allowing LeFlore to scoot to second. But Detroit failed to get him in. The Jays pushed two runs across in the second to gran the lead.

In the third inning the Tigers tied the game when Mankowski scored on a single off the bat of Steve Kemp. The game was still knotted in the fourth when the home team mounted another scoring threat.

It all started when Sweet Lou Whitaker, a 21-year old rookie, stroked a double down the left field line. Trammell, also a 21-year old rookie, followed by drawing a walk. At this point Detroit fans didn’t have a clue that this double play duo would play such a strong role in the re-emergence of Tiger baseball. That the two would play 19 years together in the Motor City.

The two peach-fuzz-faced rookies were on the bases when Mankowski came to the plate with two outs. Lemanczyk tried to get a fastball past him but Mankowski got the barrel of the bat on the pitch and sent the ball soaring into right field. Boom! Three-run homer into the upper deck overhang for a 5-2 Tiger lead. The old ballpark erupted.

“That’s the biggest hit of my life,” Mankowski said after the game. And who could blame him? His path around the bases must have felt like a flight through the clouds.

That was all Fidrych needed as he plowed over the Blue Jays for the last 15 outs, allowing only three harmless singles. Jason Thompson added a home run to make the final score 6-2 and the crowd of more than 52,000 went home very happy.

The Bird was back. The Tigers were a young team with young, promising players. The future seemed bright. The weather was even nice for early April in Michigan. Ernie Harwell was on the radio for the final out, and the ’78 baseball season was off to a smashing start. It was also the biggest day of Phil Mankowski’s career.

Mankowski hit only three more home runs in 1978 and in August he lost his regular role in the platoon arrangement. The following year he made the team out of spring training again, but he never again got as much playing time, serving essentially as a caddy to the veteran Rodriguez. By the end of the season, young Tom Brookens had supplanted Mankowksi on the depth chart. He made his final start for the Tigers on September 2, 1979, and only made a handful of appearances the rest of the month. In the offseason he was traded to the Mets in a three-player deal that brought Richie Hebner to Detroit. He bounced between Triple-A Tidewater and the Mets for a few seasons, never earning a regular job.

He was released in 1983, not quite 30 years old after suffering a knee injury.

“I was good at baseball for a while, then there was an injury and that took me out of the game,” Mankowski told the West Seneca Bee in 2011. “Life goes on after that. I don’t look back on that.”

In 1984, Mankowski had the chance to don a uniform again when he made a cameo appearance in one of the best baseball movies ever made, The Natural, starring Robert Redford. In the film, Mankowski plays a member of a rival team facing the New York Knights. It was a small role and the last time Mankowski was on any sort of big stage for baseball.

His six-year big league career amounted to fewer than 300 games, but on Opening Day at Tiger Stadium in 1978, Phil Mankowski was a hero.